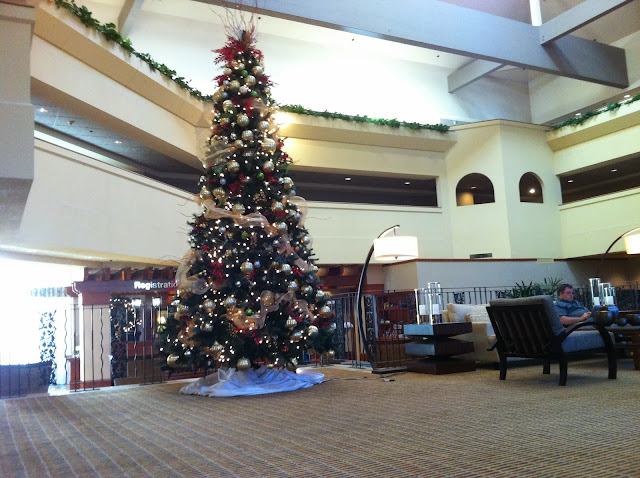 Editor's Note: sorry for the slow trickle of content. This has been a rough month.

The Kombucha Man was celebrating his last birthday in his 30s and I was being harangued to help plan something fun.

Let's speak towards the dichotomy of fun and planning for a second: one does not plan fun, for fun defies planning. This is something that I've tried to educate the plan-happy half of my family about (this applies to my sisters, certainly, and my ISM): fun just happens.

That said, I picked up the planning gene somewhere along the way and despite my raconteur ways, my inclination toward being a gadabout and my being a certified International Gentleman of Leisure, I am a planner.

So plans were hashed... fly to LA for a night, take the train up? Vetoed. Tahoe? Money worries, not everyone was a skier (I still think I could have got all of us into a nice AirBNB for cheap).

Then the girlfriend made her preference clear - there was to be gambling involved.

We would be spending the night in lovely Rohnert Park, California, home to Graton Casino and Resort.

After a few hitches we finally sped northbound on the 101 toward Petaluma - the Chicken capitol of the West, and home to not a whole lot else.

The Graton is set back from the main road but visible from miles away even during the day time. It is a monster at four stories, big enough to fit a football pitch and designed with all the panache of a 1960s shopping mall complete with "futuristic" design flourishes meant to conceal the fact that it is in fact a giant warehouse filled with people endlessly stimulating the limbic systems at the expense of Johnny or Suzie's college fund.

When entering the lobby you are blasted by some ghastly air freshener (as if "stripper" was an air freshening scent - equal parts kiwi/strawberry, bubblegum and regret).

First of all, if you want to grab a bite to eat at Graton (at least on the first floor - and at very worst in the mall style feed lot near the casino entrance): don't.


We sat down at the Daily Grill, one of several dine-in offerings.

My burger was done to the proper doneness (medium rare), and I salute the line cook in charge of that station for doing their job, but the rest was so much "meh" and "sigh" on a plate.

If you think I am being unforgiving, you should bear in mind that I hadn't eaten all day (we pulled in at noon) and I'd been cooped up at home for days battling this holiday season's microbial onslaught on my respiratory system.

It was off to the penny slots with the "genpop", and as soon as I sat down a comely tattooed blond came up to offer me a drink. They must have made me the second I walked into the joint.

"Pour 2 ounces of Maker's Mark into a coffee mug, tablespoon of honey, lemon and hot water."

I should have specified how much water because when it came back to me it was cold - equal amounts water to bourbon.

I wandered around being assaulted on all sides by noise and lights. A few rows of machines away from me a visibly tweaked out man scratched at himself while he shuffled his gaunt body in my general direction. Wanting none of that action I dove around a corner, dodging elderly Asian women, retirees and the other sad-sacks who frequent the penny slots and parked myself in front of one.

I am not sure what qualifies the Graton as a resort.  One associates a resort with a variety of activities and amenities associated with luxury vacations: slopes for skiing, marinas and lake boating, spas and massages, and the like.

I plugged $25 in the penny slots and printed my $0.02 voucher 10 minutes later. That would be enough gambling for me. I needed to get situated at the hotel down the road, get my feet in a hot tub and get a good nap in me. 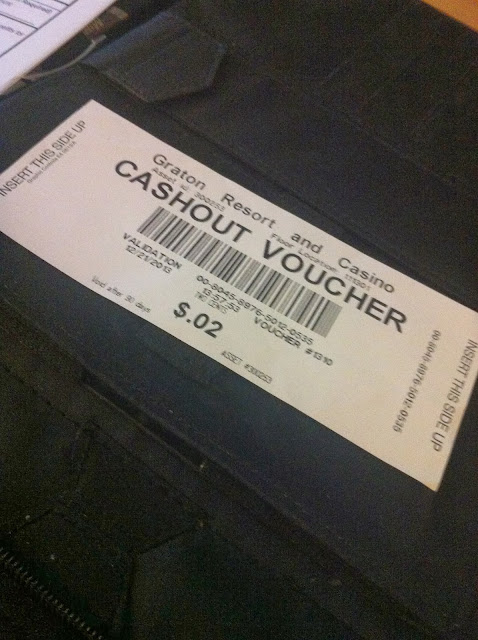 The rates at the DoubleTree (by Hilton) were pretty reasonable even for near the holidays. A double (queen) would run you about $140 with taxes and for the birthday couple we sprung for the executive suite with a large bathroom and whirlpool bathtub for around $260 (sans the fancy bathtub, that room would be around $200 after taxes).

Priceline.com or other last-minute bidding applications might get you a better rate but I felt it was too much of a gamble to take given the size of our party.

In the summer of my 22nd year I spent several months living in residential hotels in San Jose and Sunnyvale, long before they were built out to be the metropolitan hives of tech workers they are now. Sunnyvale and San Jose where suburbs for middle-class latinos, many several generations native Californians, whose parents and grandparents surely worked the artichoke fields and peach groves that once occupied the space we now call "Silicon Valley".

We lived in these hotels because despite what we thought were pretty good paychecks at the time (I had not seen a paycheck for more than a couple hundred dollars until that point), we were poor as dirt - my buddy supporting a wife and a newborn. We shared a Dotsun that had to be started with a screw driver and frequently stalled out on I280 or CA87 or wherever it was I'd be zipping to for the day.

The marriage started to show signs of falling apart and I was caught in the middle of it. My friend told me "hey, why don't you come up to the city (meaning San Francisco) for the weekend to take a break" and so I found some like minded pals and we piled into their shitty Honda and sped north.

San Francisco came into view looking all sleek and evil and futuristic and awesome under low hanging clouds that hung ominously above her. Soon my friend in San Francisco made his real intentions known: "dude, fuck the south bay, this is where you want to live."

I never had spent a lot of time in hotels again until the later half of my 30s. A series of jobs had me at extended stays in unglamorous locales such as Phoenix, Arizona and Thousand Oaks, California. I began to feel an affinity for hotels - a cave with a flat screen in which you could be anyone you wanted to be. Was I a mass murderer on the lam? A vacuum salesman? An executive on the down-low?

As long as there was a bar and a pool, it didn't matter.

Dinner time approached so I headed down to the lobby to get a glass of wine.

"What wines you got?"

Doe-eyed bartender: "I don't think we have any."

In a hotel bar, in Sonoma? Really.

"What about the restaurant?"

"Well I'll give it a shot and if I get rebuffed I'll be seeing you again I guess."

Luckily the bartender was wrong and the hotel restaurant did have wine (why wouldn't it? It's a hotel in Sonoma on a golf course.)

I sipped a Pinot noir (from Sonoma, naturally) with the Warriors game on the bar TV. A young woman sat a few seats down from me (bartender - "how's your day?", woman - "terrible." After 10 or so minutes of angrily fussing with her phone, she slapped down a tip and stormed off.)

My phone beeped at me - the other folks were back from gambling and needed their room keys. I paid, asked "can I take my glass with me?"* and made off toward my room.

* This is an old hotel trick my old man hipped me to - if you don't have enough glasses in your room, just have everyone in your party get a glass of something cheap at the bar and then just wander off with the glass. Of course, you can always just ask for room service to bring you stem-wear. The old man has a sneaky streak, though, and I guess I do too.

By the time everyone was back from gambling and getting loosened up, I was ready for the fun to start happening.

I'd been cooped up for days in my room, which is exactly unlike a hotel in many ways (although both have effective means of blocking out the sun).

Snacks were laid out in the executive suite, bottles of whiskey and wine cracked, and after everyone had their turn getting some food out of the birthday boy's crockpot (hotel money saving tip #1892 - forget about the ironing board grilled cheese sandwich, just bring a crock pot!) it was time for everyone to change into their swim trunks for that time-honored tradition of being drunk in a hot tub (the 12 person outdoor one, not the two person capacity hot tub in the room).

By 10PM the pool and hot tub close down, as does the bar and restaurant. I had plenty to drink in the room if I so wanted but I was not at 100% strength so I decided to take it easy.

Everyone else went back to lose more money at the Graton ("...I was up a couple hundred at blackjack, and I had to use the pisser, so I told the girlfriend to play my shit because she was the one telling me how to make all my plays away way, and by the time I got back it was all gone! She must have played it all on one bet..." Number Two, the Kombucha Man's assistant at the lab).

On the drive up the Kombucha Man's garrulous neighbor Rita has been explaining a number of things to us in the back of our borrowed SUV:

Rita is actually a gay man trapped in a tiny half Brazilian half Portuguese body.

Rita is from Queens and she keeps it classy.

Rita can't wait to get into the hot tub!

Rita thinks she is going to take pictures in the casino.

"No you won't" comes the universal response.

"But why? I'll use an actual old-timey camera... no one even believes those things work anymore," explained Rita in a puff of illogic.

"And the pit boss will break your kneecaps," replied Number Two, the Kombucha Man's chief minion and intermediary.

That's why you won't be seeing any in situ shots of the casino. 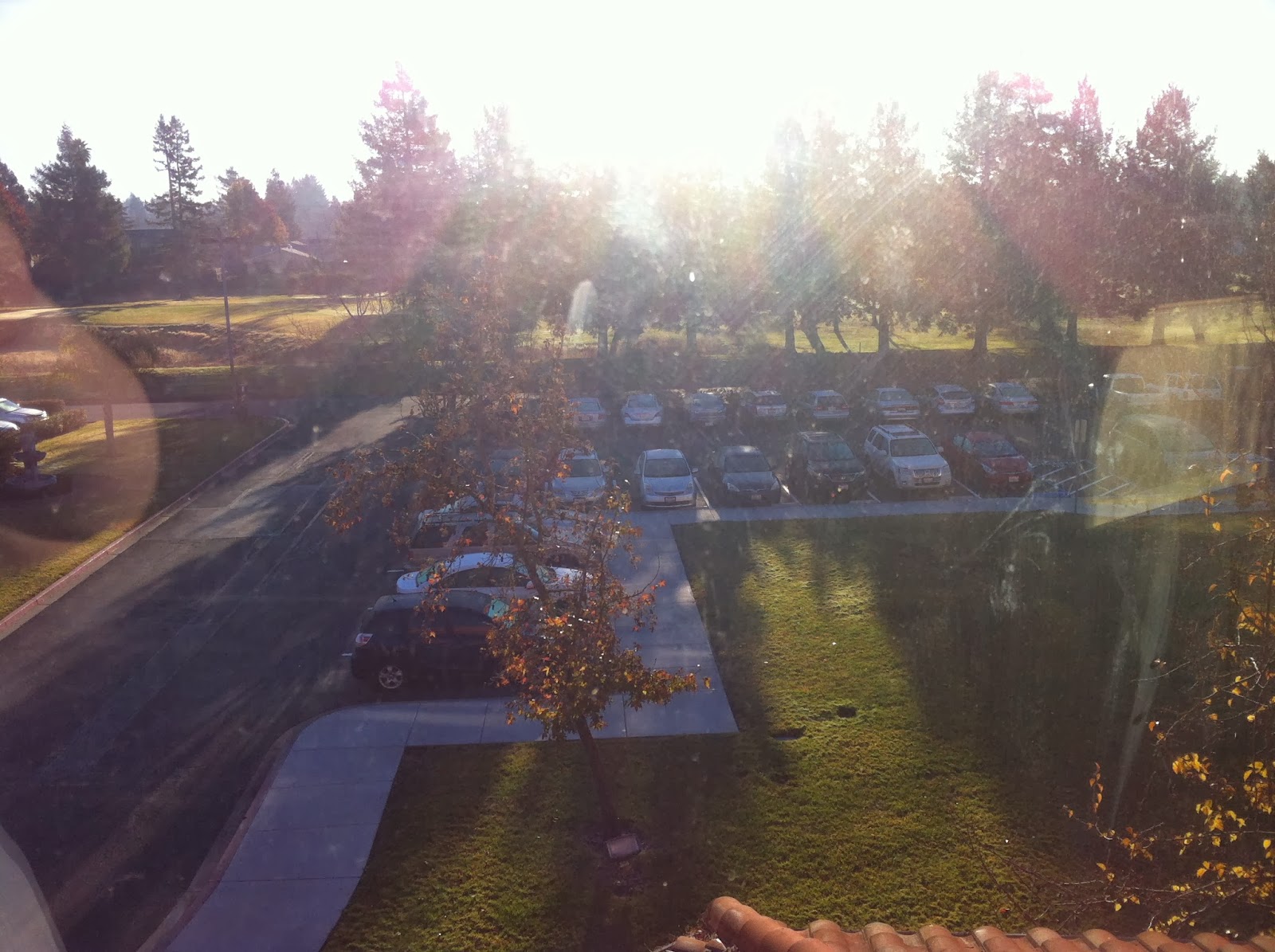 And good for you, because no matter what happens the house always wins, and most of the time, you lose.

The Double Tree in Rohnert Park, California is adjacent to a golf course if smacking around whitey is your thing, but it is also a quick drive from Sonoma and Napa Valley and the Marin coastline. For a Californian with a car (or ZipCar, or absconded sibling SUV), this is a pretty choice locale for resting one's head without breaking the bank for a North Bay near-cation.

Think about dining in Sonoma or Napa, however, because Hilton hotel chains aren't interested in Michelin or even Zagat stars.