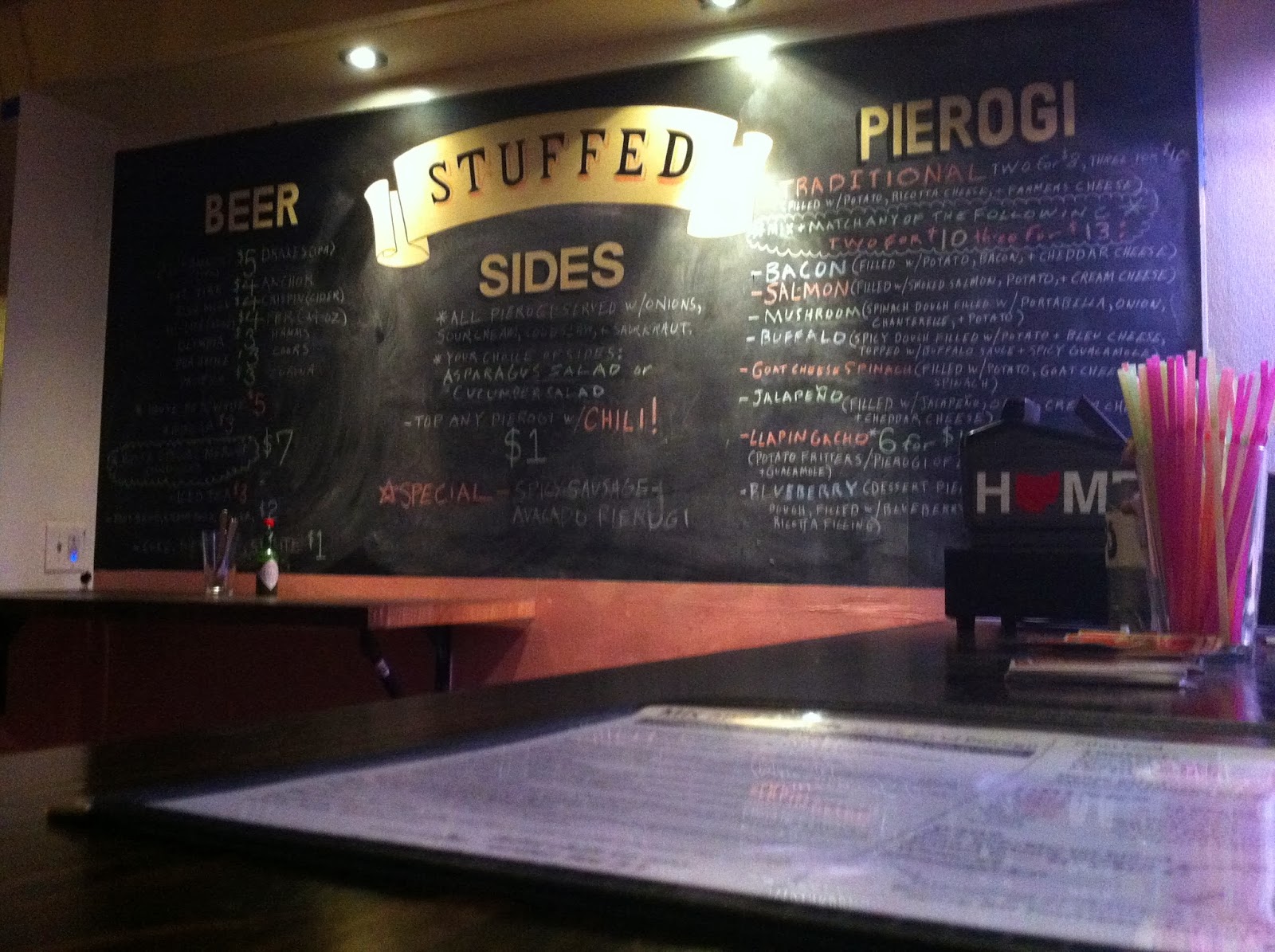 By the time my pierogies were up, the music had changed to a dirge-like metal-post-post-punk cacophony by Minneapolis, Minnesota four-peace "Empires."

They remind me of a mash up between two Cleveland bands - Rouè and Megachurch.

A lot about Stuffed, a block away from 24th and Mission BART, reminds me of Cleveland.

My first visit was just after work last December, so I was able to take advantage of the daily happy hour special which co-owner Andy Schoengrund pitches as "basically, you get three pierogies, we give you a free beer." He stands in front of an industrial sized pasta roller and cutter (they make all their dough and dumplings in situ).

The pitch reminds me of deals offered by vendors at the West Side Market in Cleveland, and I take him up on the offer - specialty pierogies sell for $7 a piece otherwise ($5 each for two), traditional dumplings for $4 each.

Owner and Ohio native Dana Sacco is also behind the counter and serves my selection (wild mushrooms and potato in a spinach dough and bacon with cheddar pierogies) with a bottled PBR (the only way to drink Pabst, if you asked me). All orders come with a cabbage slaw, sauerkraut, sour cream and hummus plus another side salad of your choosing. The salads change regularly. This cost about $11 plus tip.

On a follow-up trip I had a creamy cucumber salad to accompany a salmon pierogi, cheddar and bacon (because, cheddar and bacon) and goat cheese with spinach. About $14 plus tip, including a cold can of Olympia.

This time we listened to Warren Zevon and talked about the old Peabody's Café in Cleveland Heights, going to shows with our parents (Zevon was my first real show with my dad when I was 13), under-appreciated ballads from the LP "Excitable Boy", sneaking off to smoke cigarettes and the production style of Waddy Watchel (who's worked with everyone from Bonnie Raitt to The Church).

My main complaint about the pierogies would probably be that I wish they were pan fried in lard or schmaltz rather than run through a Salamander-type broiler before serving (the kitchen is modestly equipped and range space is at a premium, this is likely the fault of the availability of equipment they could afford to own and maintain). Regardless, I left sated each time.

On both occasions Andy rapped with me about a variety of topics near and dear to my heart: the music scenes in places like Minneapolis or Cleveland versus San Francisco and Oakland (conclusion: San Francisco's dearth of bands is probably a result of the inability for folks to afford practice space, although San Francisco's art scene is more or less healthy);  things we love about San Francisco, things we don't love; Great Lakes Christmas Ale; perpetually, perennially losing Cleveland sports franchises; "what's up with PBR?" and the creation myth of the Tall-Boy (a product that PBR test marketed in 2002 at that most beloved of dive-y punk venues, The Grog Shop). 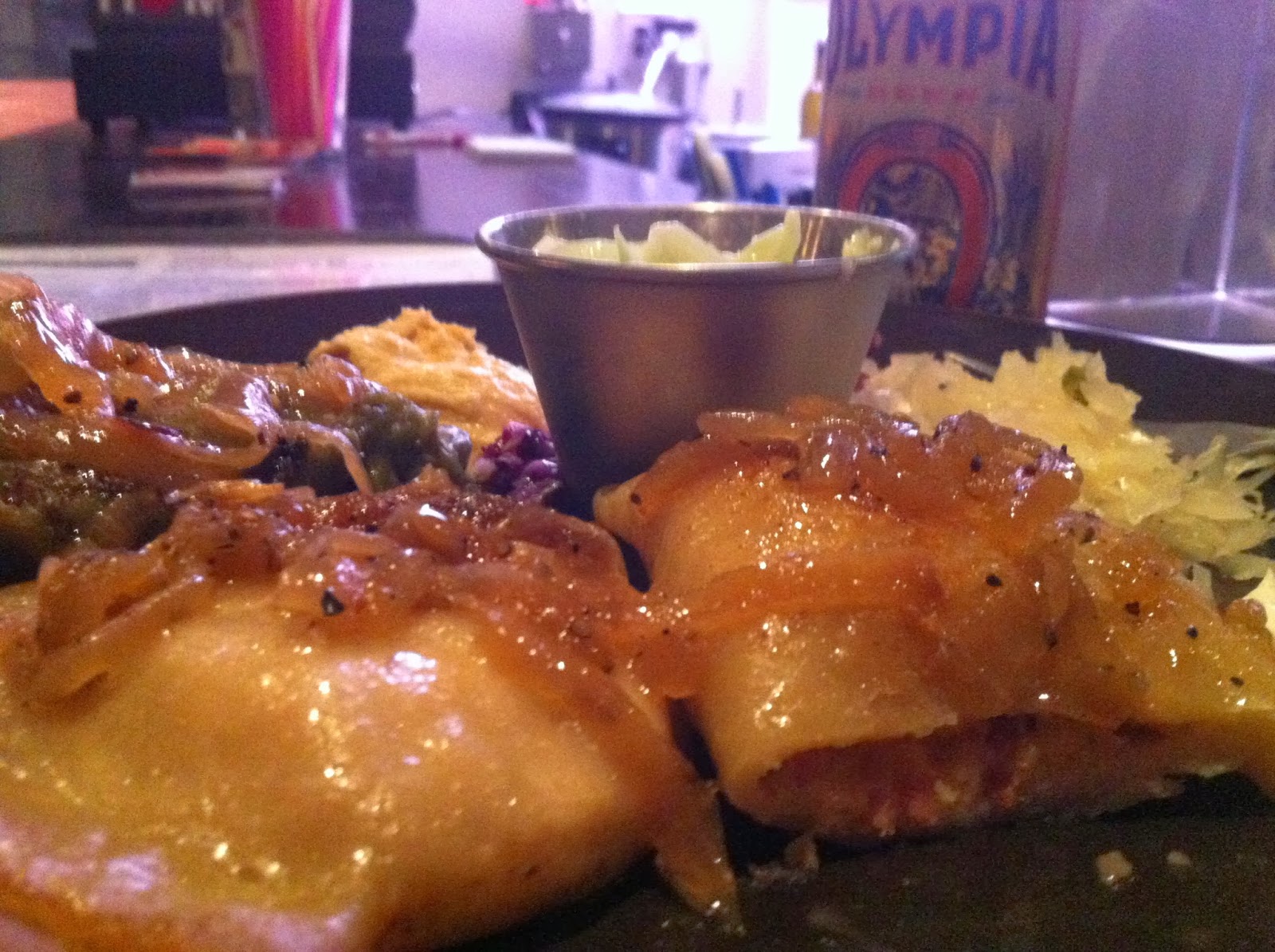 As first glance, $5 for a pierogie seems steep, especially in a city spoiled by burritos as big as your head for $8-$10 (up from $4-7 from the 1990s, for the inflation conscious). This is especially true when you consider that Iron pierogi Chef Michael Symon charges $12 for two beef cheek pierogies at Lola Bistro in Cleveland (pictured below).

Lola is a couple notches above stuffed in ambiance and critical acclaim and the pricing above all else is what worries me about the future success of Stuffed. Full disclosure: Stuffed is an enterprise I want to support for a variety of reasons I will enumerate.

First, while it is possible to get good Polish and Russian food in San Francisco it requires a lengthy trip to the Richmond. Stuffed is in the Mission, and should it find it's audience (young, Mid-western) it will be quite successful. If not, some of the blame for its failure would surely be rent hikes making Stuffed a potential non-native victim of broad gentrification in the Mission.

Second, I like the kids running the place. Andy and Dana are personable, warm, witty and genuine people. Mid-westerners. They may be strangers in a strange land (The Mission, San Francisco) - a city that is in the middle of a siege mentality and an identity crisis. Interlopers, yes, but they are not the interlopers ruining San Francisco (or some romanticized notion that may or may not be based in reality, bias or some other delusion). They, like me, understand that San Francisco is nothing without its culture of being a sui generis city that defies convention.

San Francisco is a city that chose me, of course, and not visa versa.  At 21, I had no designs on any particular place having done some limited travel. My only exposure to California had been a summer camp for under-performing students outside of Los Angeles. I wasn't particularly keen on leaving Ohio for that matter but I was goaded by a roommate to go big and come to Silicon Valley - a place I was immediately disenchanted with (probably due to the chaotic and nomadic quality of my life during the first few months, living in residential hotels with my old roommate, his young and often unhappy wife and their infant son).

The moment I crested over I-280 and saw The City glowing underneath low clouds I felt instantly that "this must be the place." I packed all of my worldly possessions and took the train a few weeks later into the 22nd Street station of Caltrain, then surrounded by supposedly dangerous urban poor scattered among a wasteland of blighted industrial buildings and warehouses.

Now million dollar condos are adjacent to the train station and the Dogpatch, formerly a mostly African-American neighborhood of emigres from the rural South during the Second World War, which is now a favorite spot for young nouveau riche to settle. They appreciate the quaint charm of the neighborhood and it's many cafés and restaurants serving up soul food, Cajun and Creole cuisine while slowly eroding the conditions that made it possible for the African-American middle class to carve out the niche neighborhood in the first place.

The immigrants from the rural South added value to San Francisco the way many other immigrant groups have - waves of Spaniards, Italians, Irish, Chinese, Vietnamese, Russians and so on. 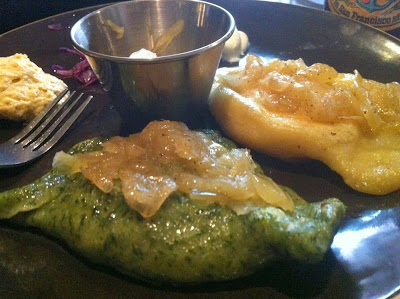 I think Andy and Dana have the potential to contribute something of value to the neighborhood they inhabit. The Mission is a peculiar place where tradition - especially Latin American - is considered sacrosanct while diversity is embraced as a virtue. Tech workers, despite the good intentions of many of them (including myself), despite the fact they they are not a monolith, are viewed as a harbinger of homogeneity acting as a countervailing force on the qualities that make The Mission special.

Finally, I think if Stuffed succeeds then I score a win in the esoteric philosophical debate about the inherent value of outsiders contributions to the city of San Francisco that I constantly have to wage against a flood of locals (and ex-pats who have put down roots in this fair city) who cry foul at the presence of "the other".

Sorry if this became a defense against naysayers and demagogues for "old San Francisco" when it should be about a humble Polish dumpling, but we pierogi eaters are thinkers and debaters. We cannot help ourselves. "Four Pollacks, five opinions," said The Wire's fictional ill-fated stevedore Frank Sobotka (this applies to anyone from the Mid-west, I think).

Swing by Stuffed after work for a beer and a few dumplings and reflect. I'm sure Andy or Dana would be glad to engage you in whatever kind of banter you prefer ("...there's always next year..." regarding whatever ill-fated Cleveland sports team you follow, the latest news about local thrash bands or thoughtful insights on the fate of the future of San Francisco). 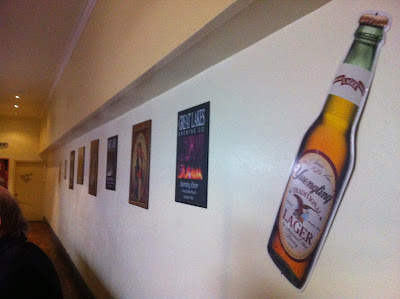