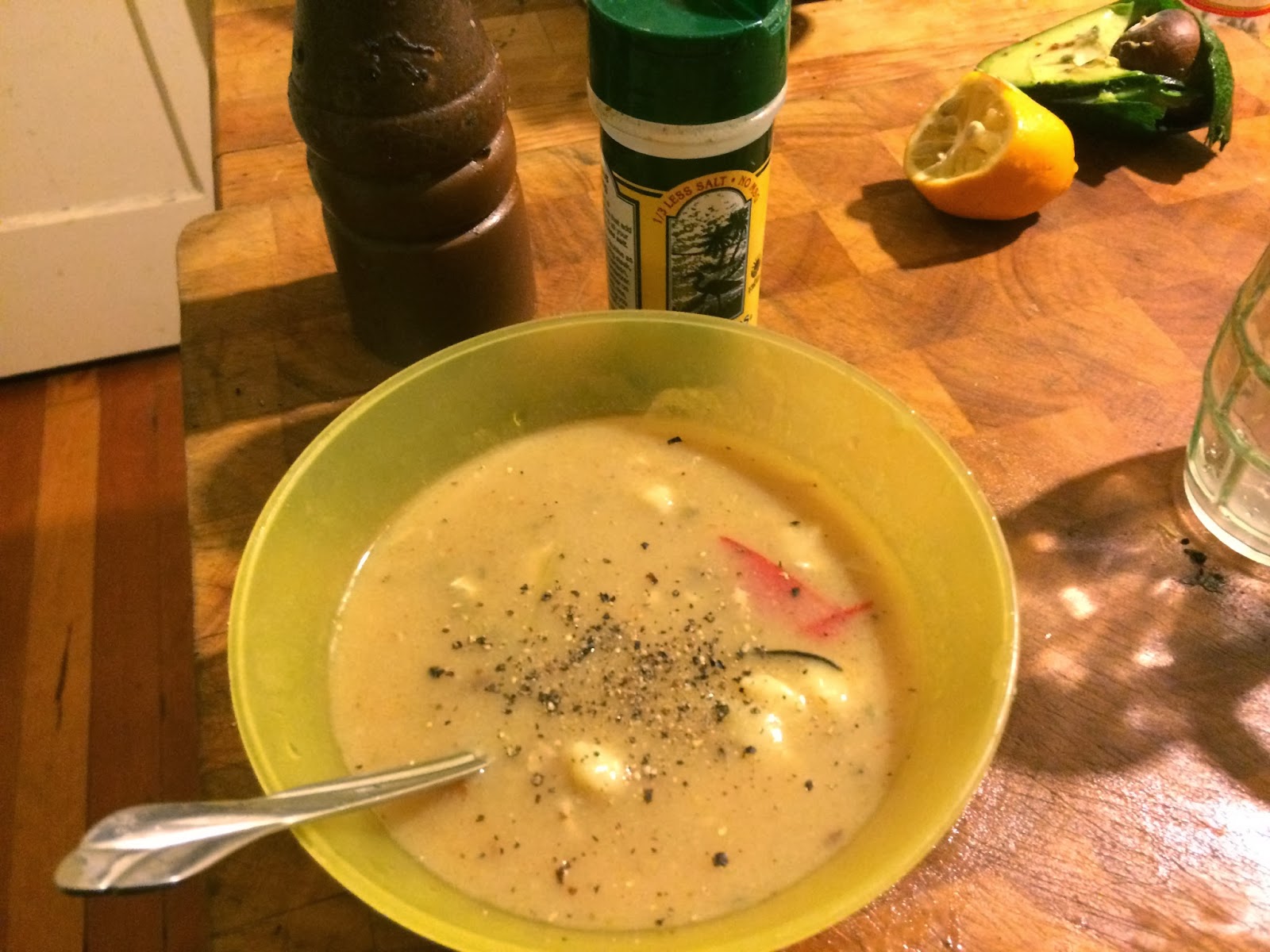 Some of the ugliest foods are some of the best to eat.

Who has looked at a pot of paprikash, stewed beef or plate of grits and thought - this is a thing of beauty?

Surely, anyone who has ever tried any of the above. However their aesthetics are not the same as a tony plate of composed food at an uptown restaurant.

In the midwest, prior to this new-fangled "foodie" revolution, sometimes these steaming piles of love on a plate would be dressed up with a sprig of curly parsley (one that a true gourmand would readily shove aside while attacking an unattractive pile of stuffed cabbage or gumbo with gusto).

Not all food can be pretty, and some you just have to roll up your sleeves and dig in.

Chicken and dumplings is one such dish, and that it tastes better than it looks might be the understatement of the century.

The rains finally came to San Francisco late in January and stayed with us for a couple of weeks. It was a relief to hear the sound of rain on the roof and from the sound of the cars on the freeway.

In the back of my mind I knew I wanted to pair the weather with some rib sticking comfort food, and I knew I could cajole my friend Sine to come over and help me cook a big pot of chicken and dumplings.

This would be an exercise in mutual "get it together"-ness, a way to snap out of our winter doldrums.

By the time we hatched this plan the rain had cleared up and we returned to our troublingly dry, blue skies. This is a boon to sufferers of seasonal affective disorders, and a bust to the area of the country that grows the majority of vegetables that find their way into American kitchens year round.

"You will need carrots, celery, peas and Bisquick," said the text I received earlier in the week when I asked for essential ingredients (flour, milk and the chicken were my prompt to her).

"Can you pick up Bisquick on the way over," I asked.

"Great, I have buttermilk too," I replied. 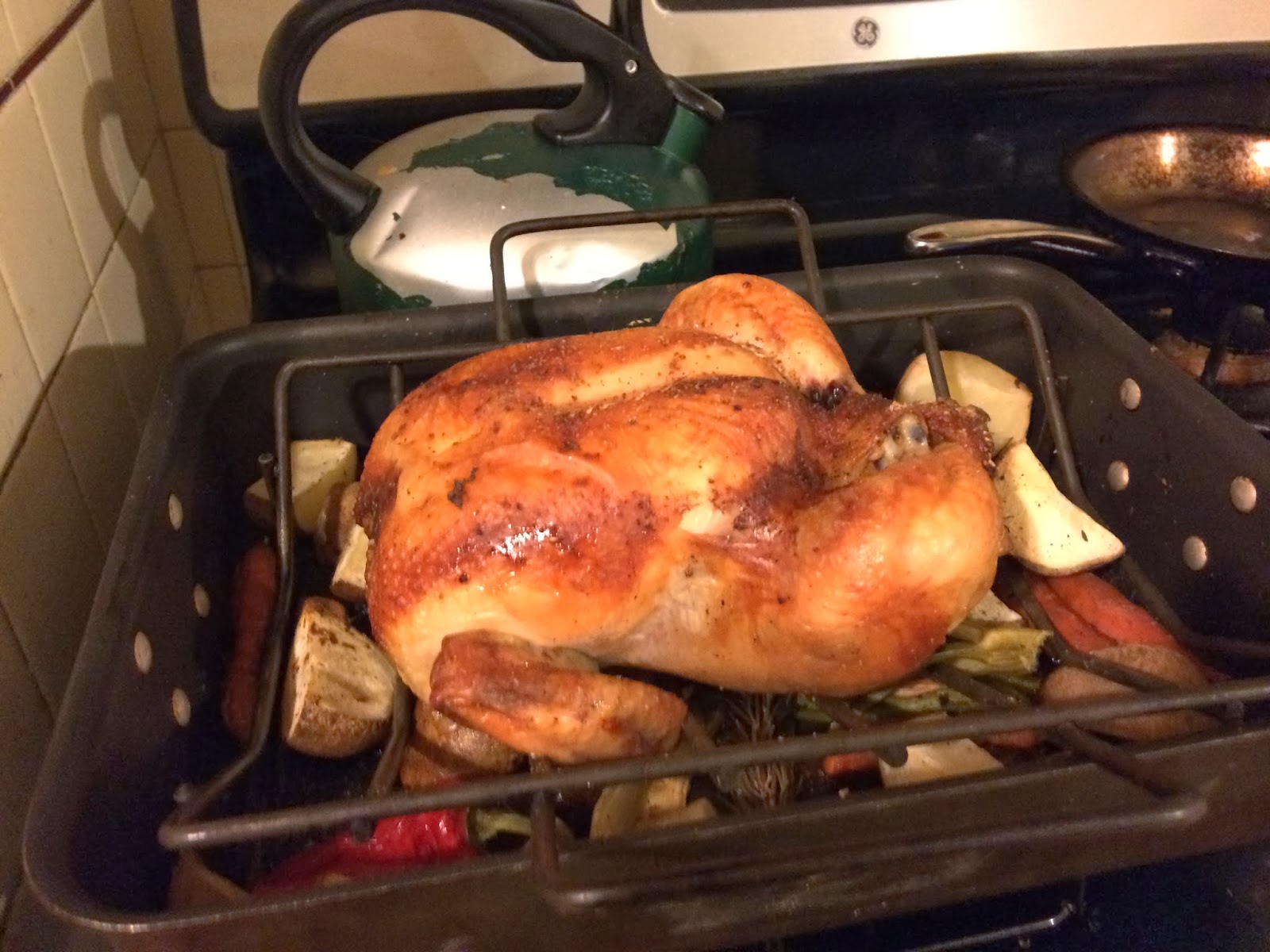 I closed the door to the roommate's room just before Sine's arrival because I was worried that our cat Harry would disfigure Sine's puppy, Lilly, a 10 month old hypoallergenic Cocker-spaniel mutt with a penchant for wanting to make friends with any person or animal she encounters. While this is an admirable feature the dog is not yet hip to the "friend or foe" calculous that some dogs seem to have instinctively.

Still, Sine describes Lilly as her "little wolf" and she greets me enthusiastically as I open the door. She's restrained by a long retractable leash - on the other end is Sine, talking on the phone. The dog is galloping in place, looks around, wags her tail then goes back down the stairs to check in on mom. Mom unleashed Lilly who is upon me in a split second all tail wagging and energy, like Fizzgig from the Dark Crystal.

Of course, Lilly and I have been fast friends ever since I helped spring her from United's pet jail at SFO.

"I'm sorry I didn't have much time to air dry the chicken after taking it out of the brine," I explained to Sine, heading into the kitchen.

"That's fine we'll slow roast it," she said, as I thought to myself, 'good, that will give us time to get a drink,' "I could use a drink anyway." Hah! Great minds.

"You've got the bridge, number one," I said. On cue, Lilly did a number one at my roommate's doorstep. Harry can be seen pacing menacingly back and forth under the door.

"The cat is probably making her nervous," I offer.

"We walked all the way over here," (about a 1.3, 1.5 mile walk depending on the route), "and nothing. You're a little asshole!," she was once again addressing Lilly, who simply looked up and wagged her whole body in giddy excitement.

"Let's use this bathroom towel," I grabbed a towel from the living room that had previously been bleached out by leaking drain cleaner and had seen better days.

Lilly's "accident" was cleaned up and I went down the back stairs to the garage, Lilly in tow, to soak the towel in hot water before putting it in with the next load (as usual, I was 3-4 weeks behind in laundry).

"Are you going to be my little laundry helper, Lilly?"

"She's not bothering you, is she?"

"Not at all! I'm just going to put in this next load then you tell me when the bird is in the oven so we can have a beer."

The bird and roasting vegetables (potato, garlic, carrot, celery, peppers) were in a large roasting pan in a 350ºF oven.

"Let's make it 325 so we have time for more than one drink," I offered. We turned the bird down and added time to the timer.

On the way down the hill to the bar, the other shoe dropped. Shoe number two.

Two and a half Crispins later, we came back to the alarm already sounding (we were about 10 minutes over, but I wasn't worried since we were slow roasting a cold chicken -- I said I didn't have enough time to air dry it, but I actually meant I didn't get it into the brine until early that morning when the bird was frozen solid; it is a miracle that it thawed out by 4:30 when Sine finally arrived).

As mentioned, clearly Sine had a recipe in mind when we embarked on this journey, starting over a week ago.

Plans were made ("man plans, god laughs"). Brine the chicken ahead of time? Sounds like an idea. Use Bisquick? That's a nice theory. Did someone say peas?

The peas never made it into the final dish (suits me fine, I have a plan involving "farrosotto" for them).

I can only guess on the proportions used in making the dumplings.

I can only guess on all of it. My educated guess is hopefully worth something, so I urge you to to experiment with smaller portions (eg, just roast the leg, make 1/4 of the dumplings, et cetera) until you get everything the way you like it.

That said the final product is a thick stew of torn chicken, dense dumplings and roasted vegetables in one hot, rib sticking mess. It is even better the next day...

Roasted Chicken and Vegetables:
Rub bird inside and out with olive oil, salt, pepper and minced garlic.

Stuff cavity with lemon, shallot, 2/3rd of the herbs and the celery heart.

Arrange vegetables, garlic cloves and remaining herbs on the bottom of roasting pan.

Place chicken breast-side up on roasting rack and rub with Everglade's seasoning.

Roast for 75 minutes at 325ºF. Set roasting rack aside on a sheet pan and set aside vegetable. Remove the wings and add to 3 quarts of boiling lightly salted water. Cover and simmer on lowest heat.

Allow chicken to cool for at least 20 minutes then remove skin.

The dog gets some of that but honestly, me and Sine ate most of it. Some was added to the quick stock.

Separate meat from the bones. Wrap bones in cheese cloth and tie off with butcher's twine. Add to water and boil rapidly for about 20 minutes.

Mix. Should be the consistency of thick pancake batter (because, it is... or would be if you added an egg).

Using a large metal soup spoon, spoon a heap amount of batter one spoonful at a time into rapidly boiling stock. Batter should drop fully from spoon.

Eventually soup will thicken with excess bits of flour that dissolves into the liquid.