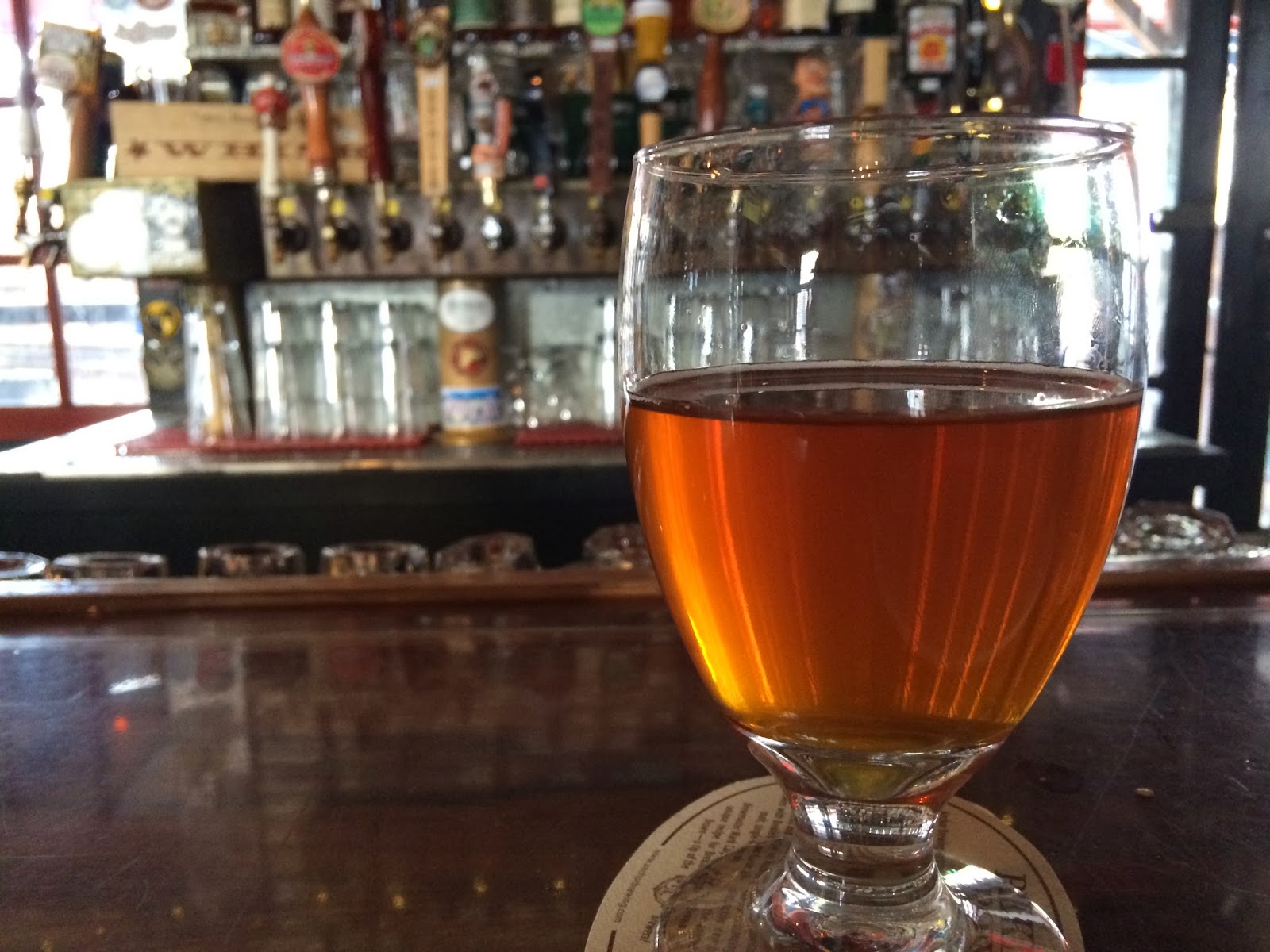 I'm waiting for my bacon cheeseburger (sub the spuds for macaroni salad if they have it) with a pint glass full of soda and a dash of bitters and a draft sour ale at Zeitgeist.

The stereo is blasting something that Shazam tells me is "Son of Sam" by a band called Chain Gang off a 1993 re-release "Perfumed" (Matador Records). The song was originally recorded in 1977 as part of the No-Wave scene.

The usual suspects line the bar: Happy Todd, Rush Jones, Solid Dollar Scotty, the door guy and a few regulars. The bartender sets out a matrix of a dozen pint glasses on a slip mat near "the salad bar" and begins filling each with Worcestershire sauce, pickle juice, prepared horse radish, ground pepper and Tabasco sauce.

"What the hell are you doing?" chimes in Happy Todd.

"I'm telling you, I'll sell out before 3PM," replies the bartender, focusing on his mise en place.

"No fucking way," comes the reply from Todd.

Don't get me wrong, I love Zeitgeist, and I felt I needed to break up the monotony of my daily burrito from my unrequited love at Cazadores.

"Ready for beer week?" I ask, as the bartender shakes his head in feigned dismay. "Got that Pliny?" I asked with feigned interest (because: sarcasm).

"Oh god, we actually got a call about that," laments the bartender, "I told them they'd have to wait. Every fucking year..."

"To the 'best beer in the world'," I say, raising my (likely far superior) sour ale toasting no one in particular. 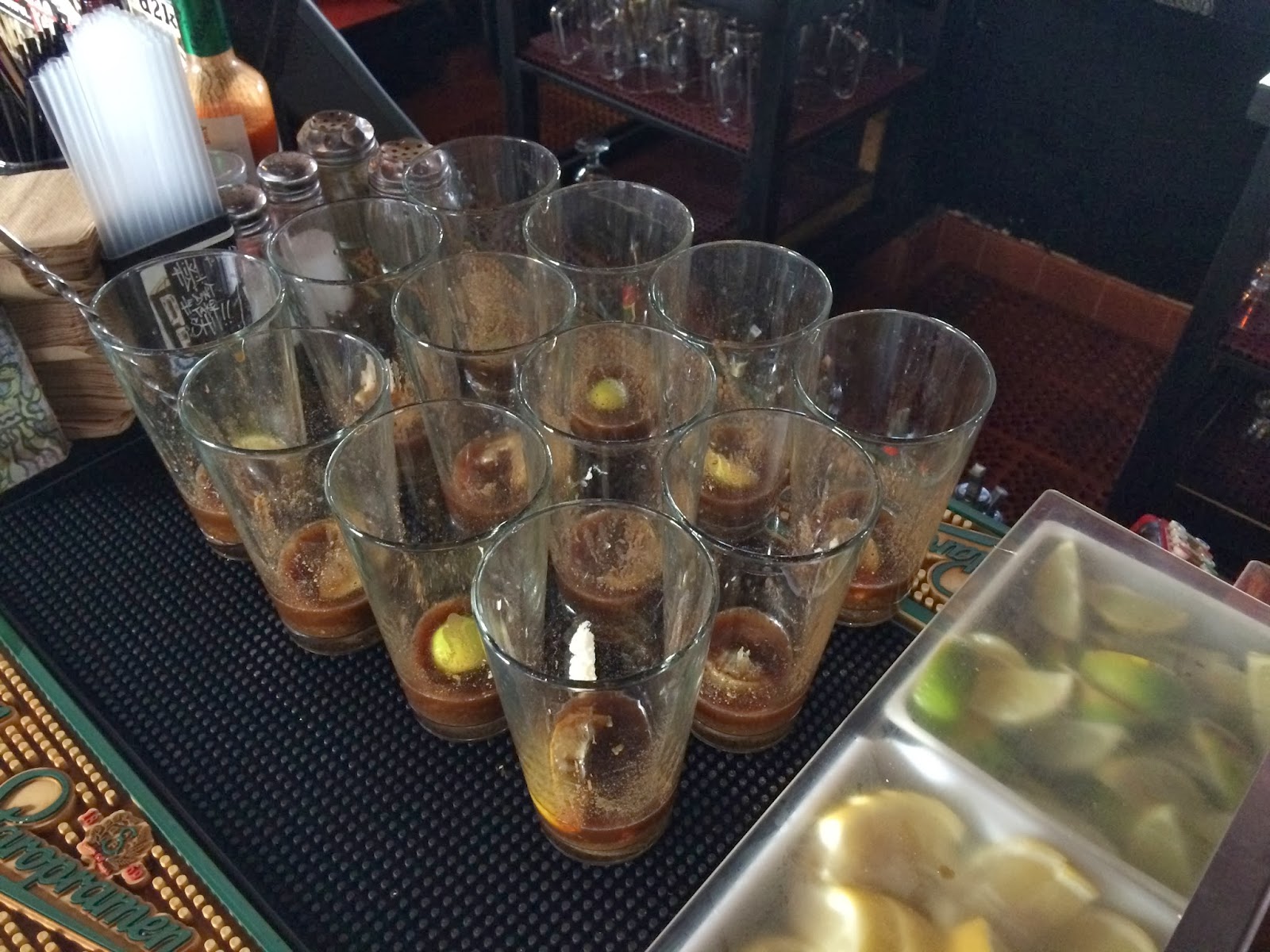 Yeah, yeah, yeah... Pliny the Elder, Pliny the Younger. "Best beer in the world!" I fucking get it already. Bore-ing!

As far as I am concerned the beer combines the pleasing qualities of drinking turpentine with the gentle aroma of a grow room.

I'm exaggerating obviously but if only to prove an important point about the breathless hyperbole with which the Russian River Brewing Company's Pliny the Elder is exalted by every hop-crazed beer nerd on the planet: Pliny the Elder is good but not great, and certainly not worth the frothing devotion the label-whores have ascribed it.

Pliny the Elder is in demand because it is made in small quantities, but it is not significantly better than many of the "west coast" style India Pale Ales on the market (at least it's difficult for me to tell over all those IBUs).

I finish my burger by about ten 'till 2PM. So far no one who has come in has ordered a bloody mary.

I touched base with Nathan Sheeran over at Twenty Five Lusk mostly as a "hey I haven't talked to you in a while" sort of thing but also to (a) see if I could get a reservation for myself, Mia Weening and Lotta to perhaps have dinner there soon and (b) inquire about their Beer Week plans.

Here's what Mr. Sheeran forwarded me:


Hello gents. This is our beer week offering. The beer is a highly allocated 9.5% ABV, aromatic IPA. Our buddies at Lagunitas have been sorta cloak & dagger about it's story, but I know it is one of the best integrated high alcohol IPA styles I've had. The hop varietals are yet to be named according to the brewery.

Come visit us and enjoy Lagunitas Brewing Company’s limited release, SF Fusion.  We will be serving a crispy Peking style quail with a spiced blueberry and shishito pepper sauce as a wonderful pairing with this exceptional beer!!!

Oooh! A mystery! Well hopefully I can get down there before they run out, which they would if there was a friggen "Pliny" in the name.

Now I am giving Russian River a hard time, and they can take it: no matter what, people will drink (and pay a premium to do so) whatever rare beers they put out.

I will probably drink some Pliny this year, and I'll probably enjoy it. A lot. That said, can we please stop obsessing over these "high ticket" labels? For one thing, I think it tarnishes the image of Pliny the Elder as a naturalist, a polymath and a man of the world. He was a pre-Renaissance renaissance man, if you will.

Adding to that, label allegiance seems to me counter to the ideals that spawned the craft beer movement that Beer Week celebrates one week a year and that places like Zeitgeist and Toronado celebrate daily: that beer can be made by common men and women, not monolithic corporations, that beer is not a monolith and that there is heritage and tradition in brewing that cannot be expressed in mass production.

Who cares if you can't get your hands on some Pliny? Have you tried Bear Republic Brewing Company's Racer 5, Stone IPA or Lagunitas IPA? How about Anderson Valley Brewing Company's Boont Amber Ale? That's just the near west coast, we haven't even touched Rogue, Ninkasi, Deschutes, Bell's, Great Lakes, Brooklyn Brewing companies and our amis du nord Unibroue.

Or some of the more obscure "Flemish" style sour ales that are popping up?

Of all the beers mentioned, the latter really gets me excited.