Dedicated to the professionals and volunteers of the San Francisco Fire Department.

The beginning of March is almost always warm in San Francisco, and maybe more than a few natives would be horrified if I told the wide and far readership of this blog that the best times to travel to San Francisco where very early Springtime and the middle of Autumn.

Of course, folks travel when travel is convenient, so there will always be a steady stream of tourists in shorts and flip-flops shivering away during the cool July air while the natives wisely dress in light layers that can be easily removed should the weather improve. Often a gust of warm wind will blow across the city just 40 minutes after sun down as the sun heats the air over the open ocean, but summer months can be pretty dreary and down-right cold.

But today was perfect.

Tuesday, the 11th of March, 2014 was an unusually warm day, the first Tuesday after confounded Daylight Savings, and the sun was still high enough in the sky to illuminate the view to the east from my front door: the Slovenian Hall, Dogpatch, Hunter's Point, Alameda, Oakland and in Mission Bay a rather disturbing column of smoke rising high into the air then drifting to the south. 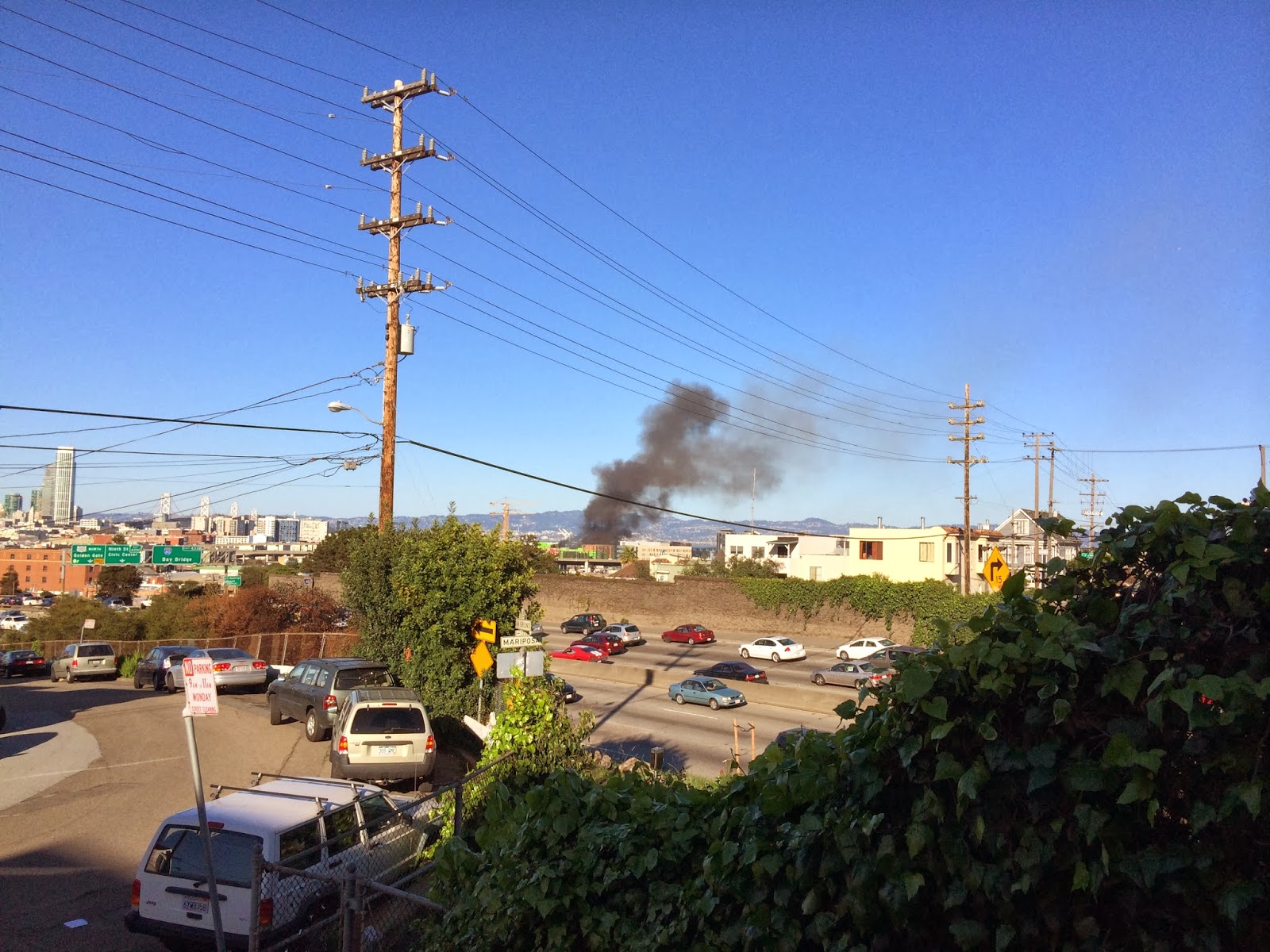 I watched it and photographed it as Deth Veggie pulled up in his 1979 Mercedes, "Sadie."

"Yeah, something's on fire over by 4th and King," he replied, getting out of the car to take a look from my vantage.

We tuned into emergency radio as the fire went from three to four alarms (and later, five). Hundreds of emergency workers and dozens (as of this writing as many as 90) of emergency vehicles deployed to control the blaze - a construction site at 4th Street and China Basin, blocks from Caltrain and along-side AT&T ("Willie Mays") Park.

"I hope those condos weren't pre-paid," I quipped.

"I hope no one got hurt," Veggie offered, looking sidelong toward me.

We drove off toward Mission Street with the fire in Sadie's rear-view mirror, straining to hear crackling dispatches over the radio on my smartphone.

We were going to say goodbye to a San Francisco institution: Joe's Cable Car. 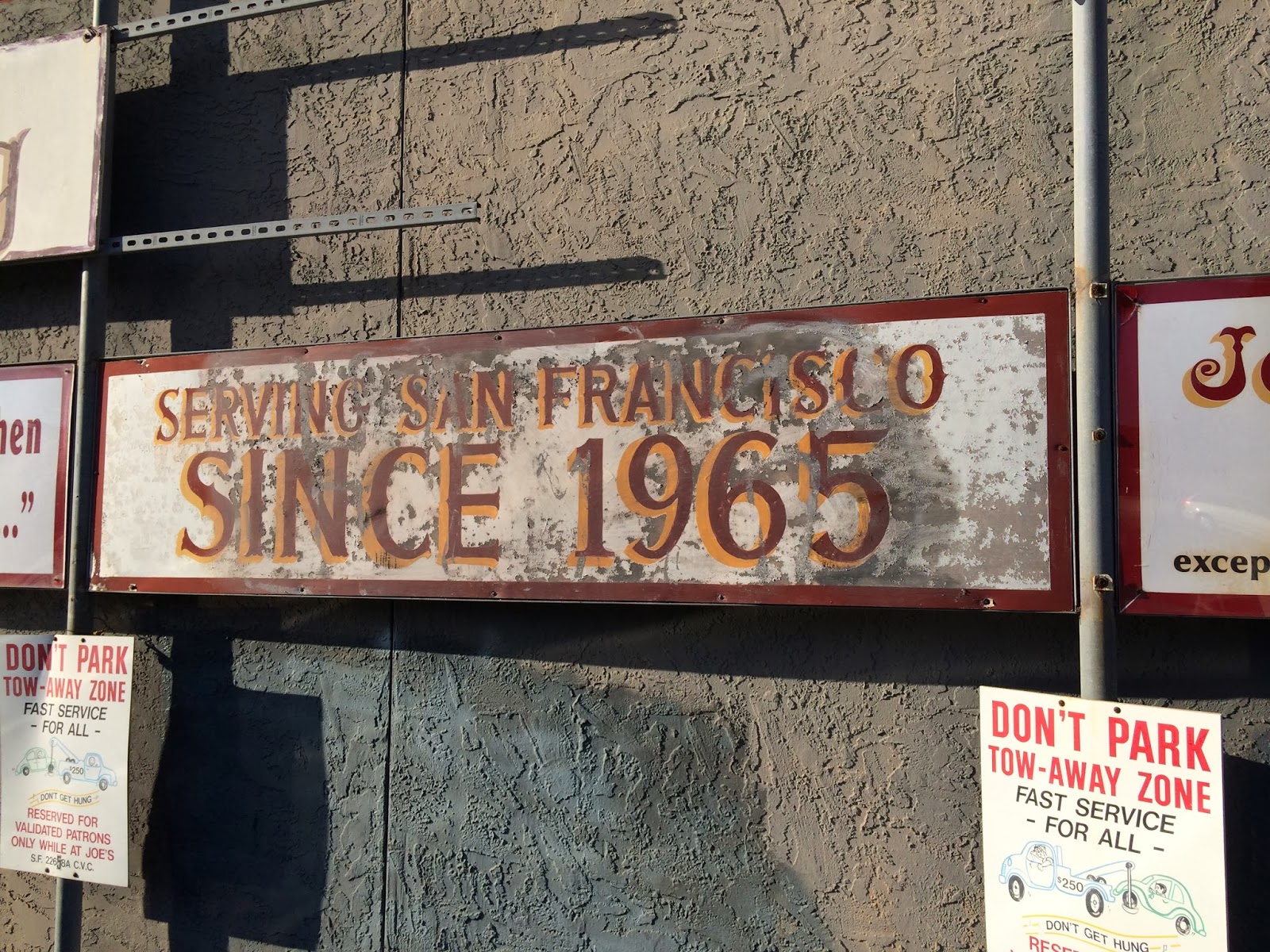 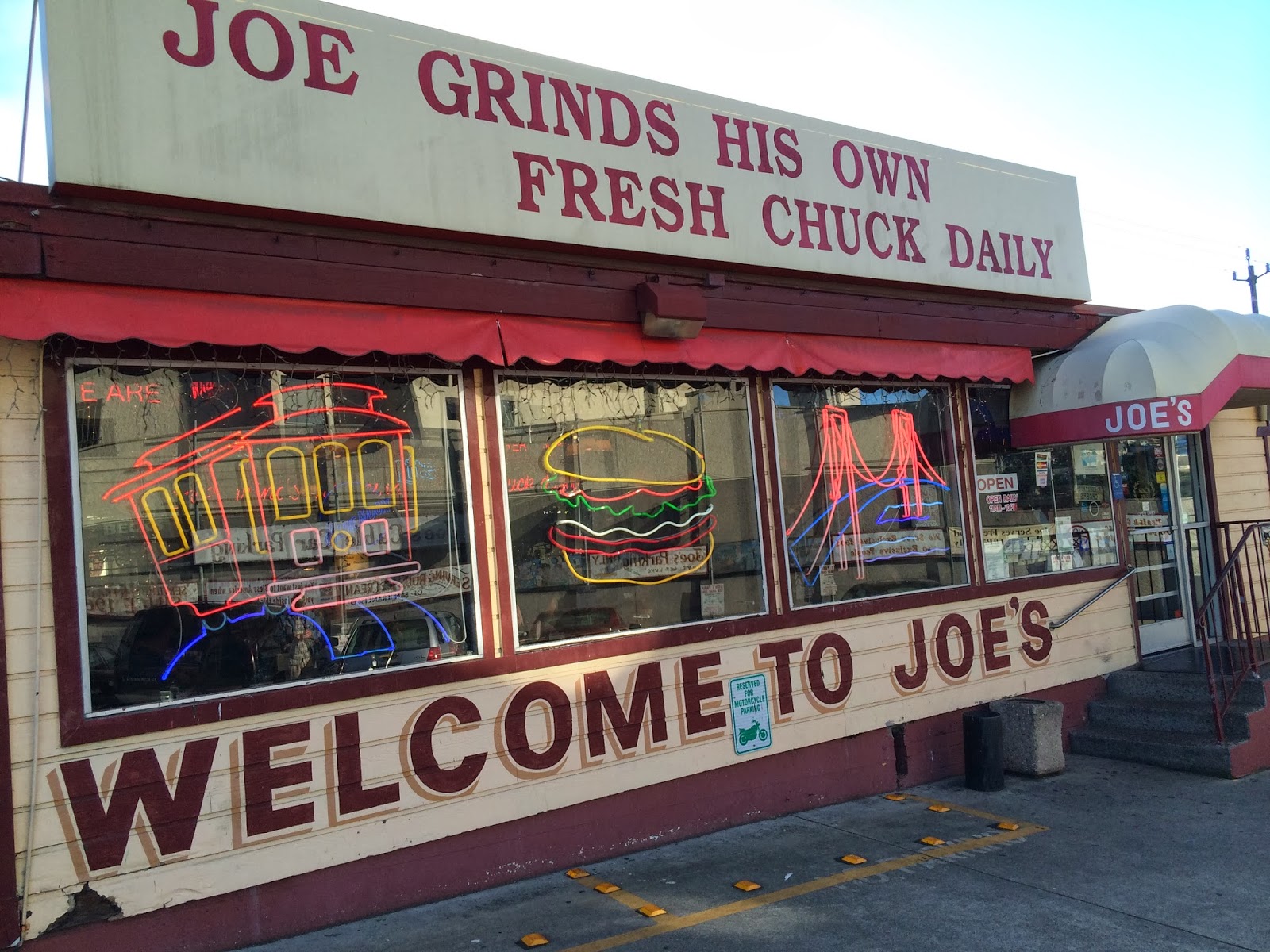 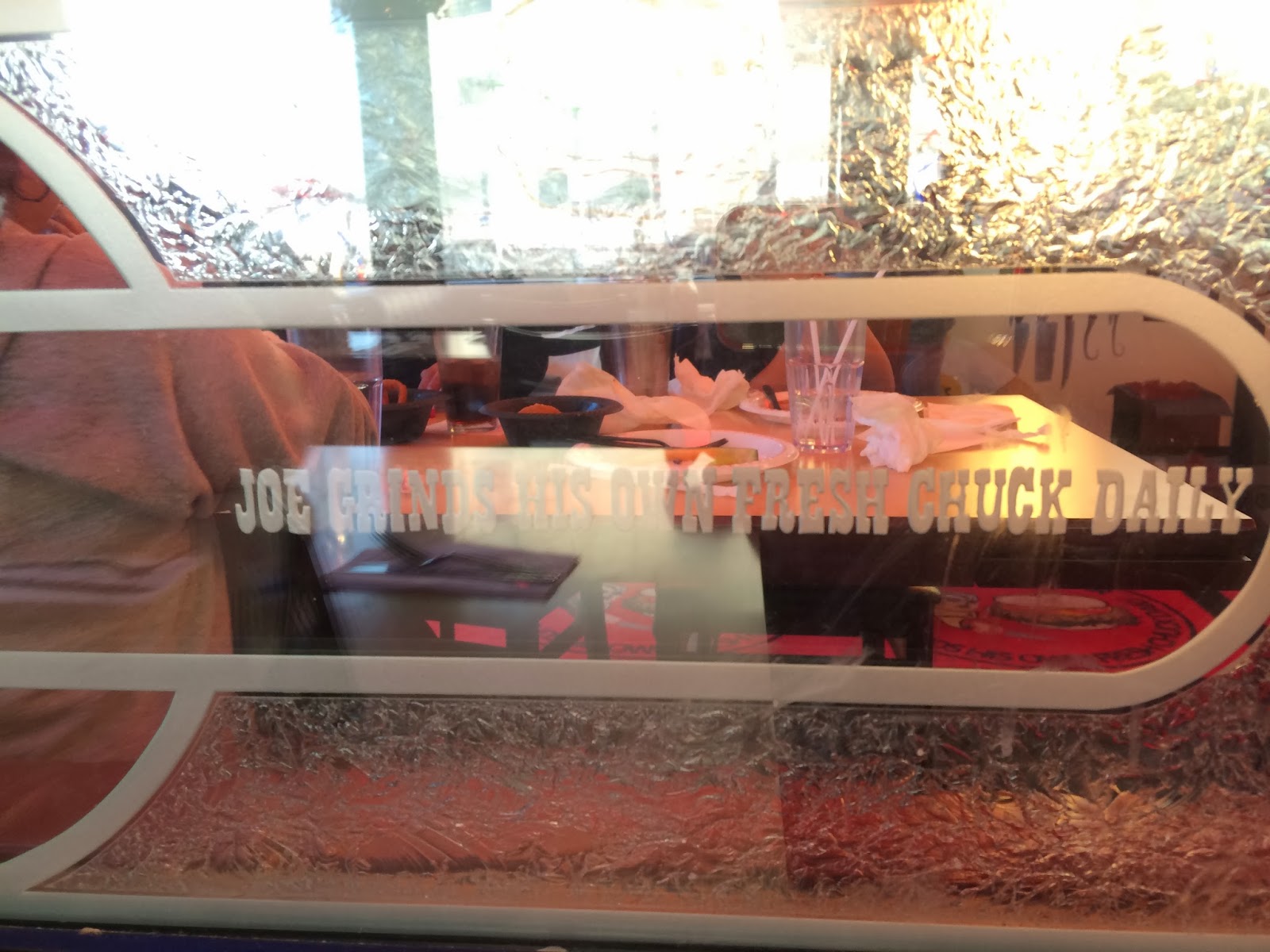 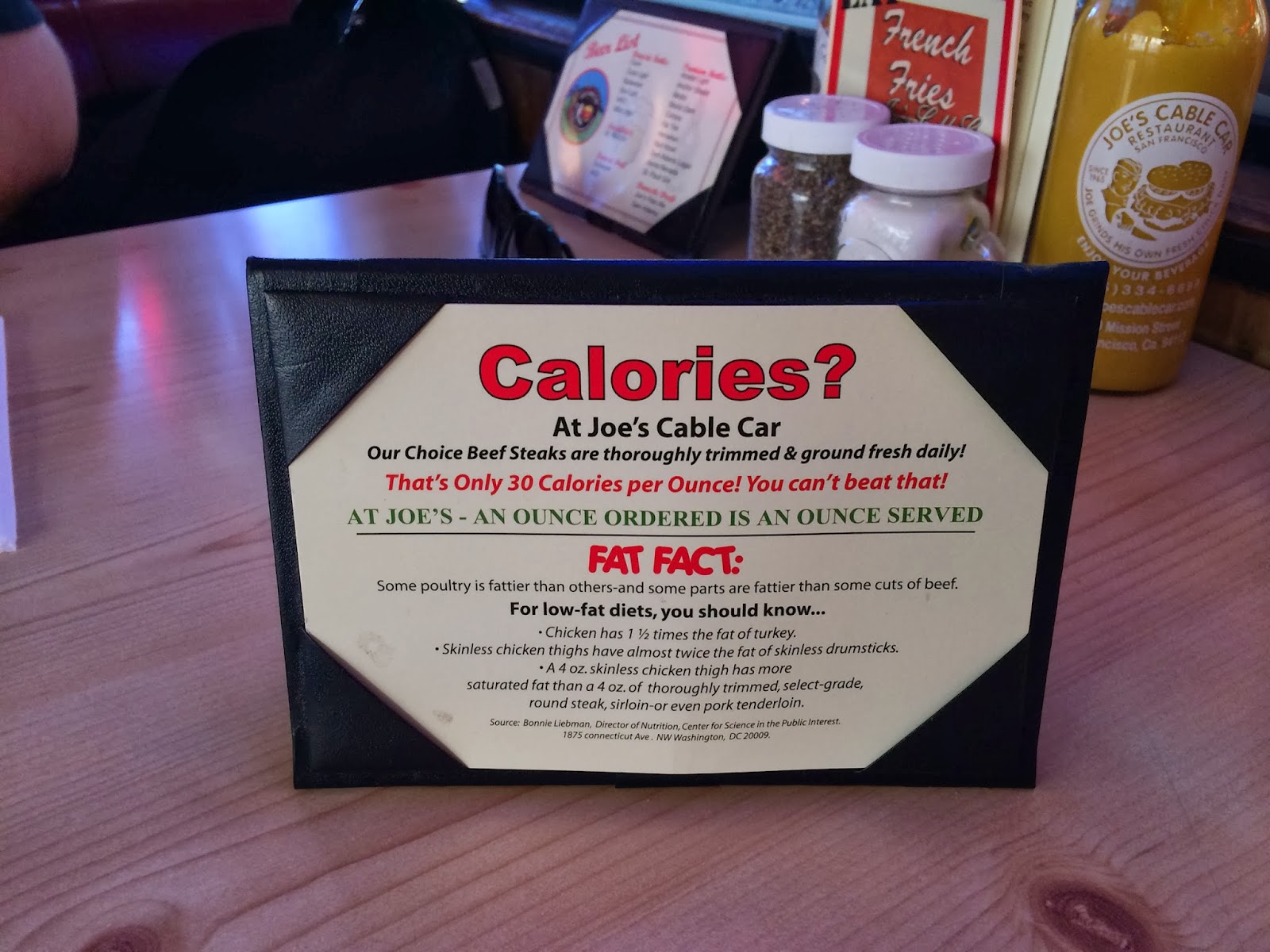 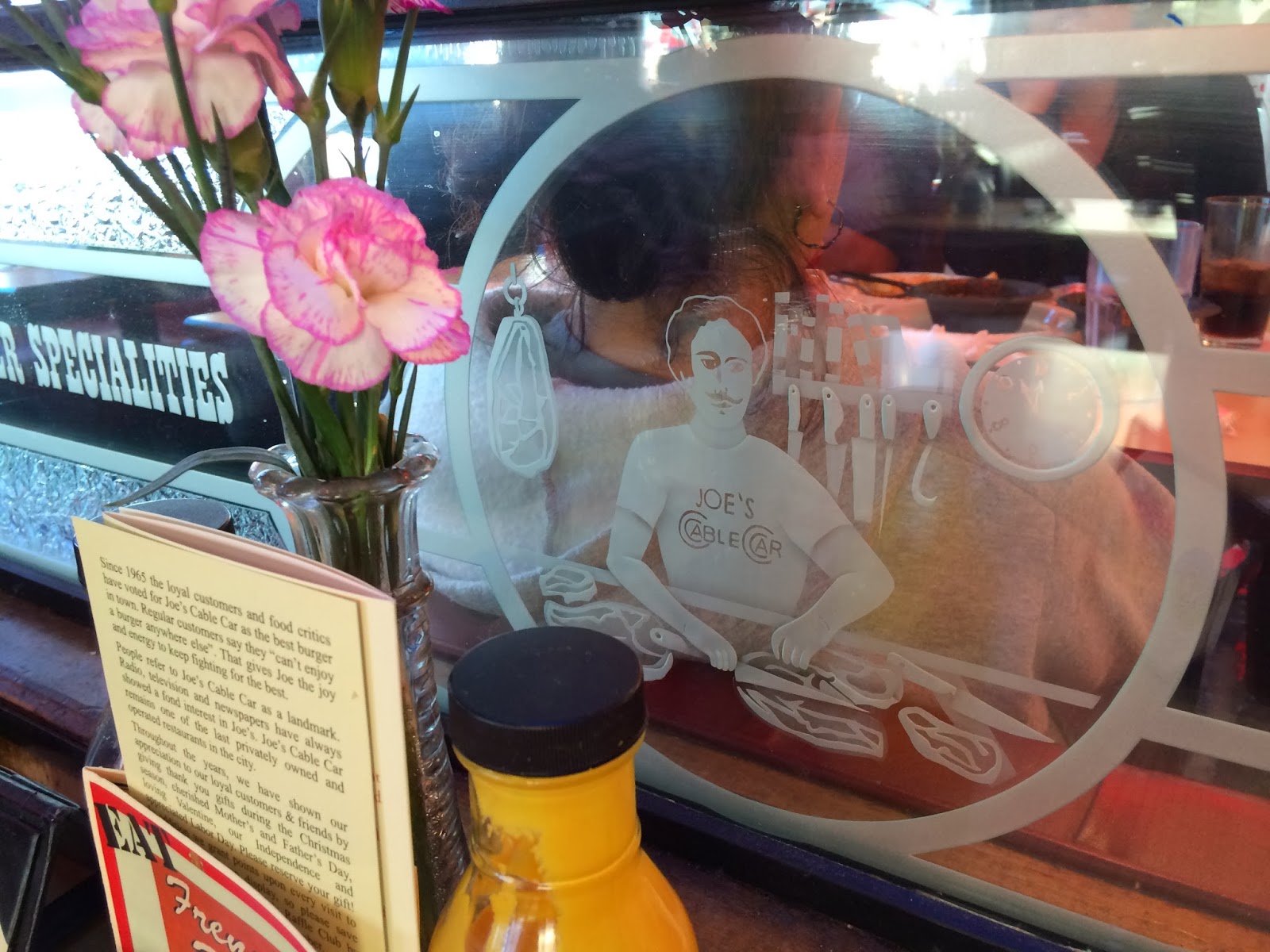 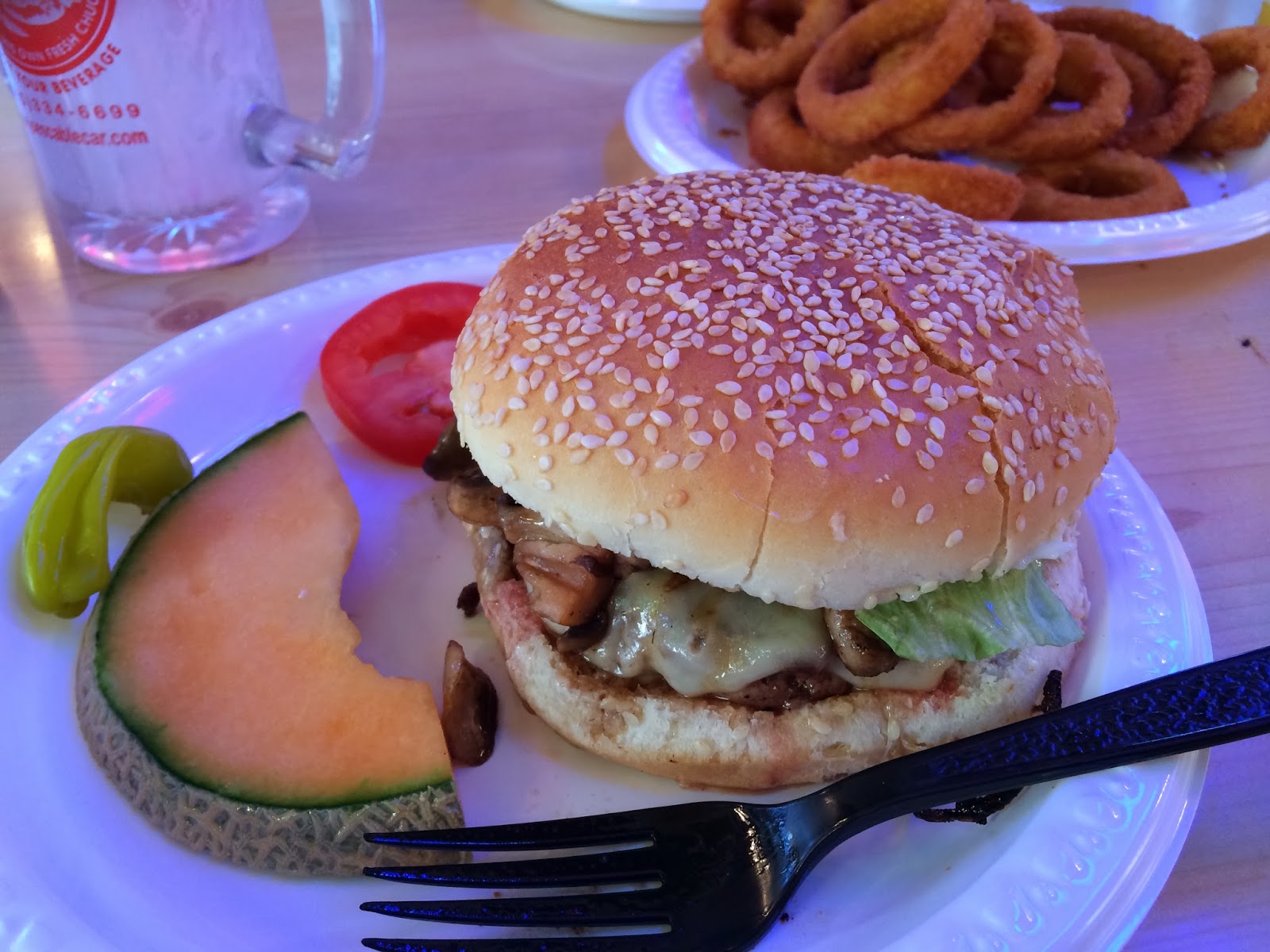 How was it? Like many things in San Francisco, it was expensive with a touch of weirdness. Look no further than the Joe's Cable Car creation myth:


In 1965 Joe's started out with 160 sq ft. building constructed to look like a S.F. Cable Car. It operated as a drive-in diner with walk up service.

In 1973, the rooftop of the Cable Car was extended to provide shelter from the rain. This caring gesture met the customers' approval and encouraged continued improvements.

By 1977, it was time to protect customers from the wind. Walls and windows went-up around the extended roof, completing indoor seating.

In 1980, 500 sq ft. was created to accommodate out-door seating. The Cable was ready to expand!

In 1983 Joe's went all-out, adding 1000 sq. ft. Now Joe can join all the customers for his Daily Fresh Burger in an enclosed seating, and comfortable booth. Soon customers began comparing the construction pace to the Winchester Mystery House. The restaurant was growing one step at the time. Table service was provided in 1998 so customers no longer had to stand in line and order from the counter.

Satisfied regular customers have spread the word and proudly invite guests from as far away as the Far East. Some of the original customers come back with their children and grand children to reminisce about those good old days. Since 1965 the loyal customers and food critics have voted for Joe's Cable Car as the best burger in town. Regular customers say they "can't enjoy a burger anywhere else". That gives Joe the joy and energy to keep fighting for the best.

People refer to Joe's Cable Car as a landmark. Radio, television and newspaper have always showed a fond interest in Joe's. Joe's Cable Car remains one of the last privately owned and operated restaurants in the city.

Throughout the years, we have shown our appreciation to our loyal customers & friends by giving thank you gifts during the Christmas season, cherished Mothers & Fathers Days, loving valentine, our Independence, and appreciated Labor Day. In addition, we grant points upon every visit to exchange for gifts on display, so please save them.

To the people who wonder what happened to the food quality in the U.S., the answer is simple-the fast food trend!! Joe's Cable Car chooses to accommodate food connoisseurs who appreciate the time and effort that goes into serving the ultimate burger. It has been our goal and that is why "Joe grinds his own fresh chuck daily, USDA choice beef only."

Joe's Cable Car indeed grinds their own burgers daily, throughout the day. Past frosted glass dividers and a menagerie of hanging kitsch, objets d'art and neon signs I saw a cook trimming down a large sub-primal of beef by hand.

The resulting burger is excellent: juicy and beefy. Mercifully it arrived on the heels of both Veggie and I finishing our milkshakes, made with Bud's Famous San Francisco Ice Cream, before we were overtaken by the sugar come-down.

Alvin "Bud" Edlin shuffled this mortal coil in 2008 at age 96 and it is unclear as to whether the ice cream is manufactured in the Bay Area at all anymore (the brand is now operated under license by Berkeley Farms - which is in Hayward and other locations far away from Berkeley - and the American Foods Company which manufactures western style foods in Bangkok, Thailand for distribution to Asian markets).

Whether it was made in Hayward, Gustine, Stockton, Chico, Auburn or even (but unlikely) Bangkok, the milkshake was damn good and I guess I'll be hitting the gym tomorrow.

Veggie ordered a patty melt, which was my first choice (it's my mom's favorite sandwich of all time, and I'm a bit of a momma's boy). This of course forced me to switch my selection because although I love a patty melt almost as much as I love my mother I loath ordering the same thing as anyone else in my party.

So instead I got a 6-ounce mushroom burger with Swiss cheese cooked to medium and a large order of onion rings to share.

Food came on styrofoam plates with plastic utensils, the embossed Joe's Cable Car napkins had been replaced with generic napkins you could find in any Cash & Carry.

Unfortunately the onion rings were also the kind you could get at a Cash & Carry, although Veggie swears these were hand dipped and fried on previous visits to Joe's Cable Car.

With only a few days left of operation, I could see cutting some corners.

We paid ($54 for two, milkshakes, burgers and a large order of onion rings), bought some souvenirs.

Best wishes to proprietor Joe Obegi from a thankful city.

"So, what happens to Joe's after he shuts down?" I ask Veggie.

"They're putting up another 6-8 story housing unit, mixed retail and residential," he lamented.

By the time I returned home dusk was just setting in, and I could see the smoke from the fire in Mission Bay turning lighter in color and thinning out. The white smoke was a good sign that the fire was dying out but the structure would be a total loss according to statements made by the SFFD chief.

There were no reports of injuries at the time of this writing. 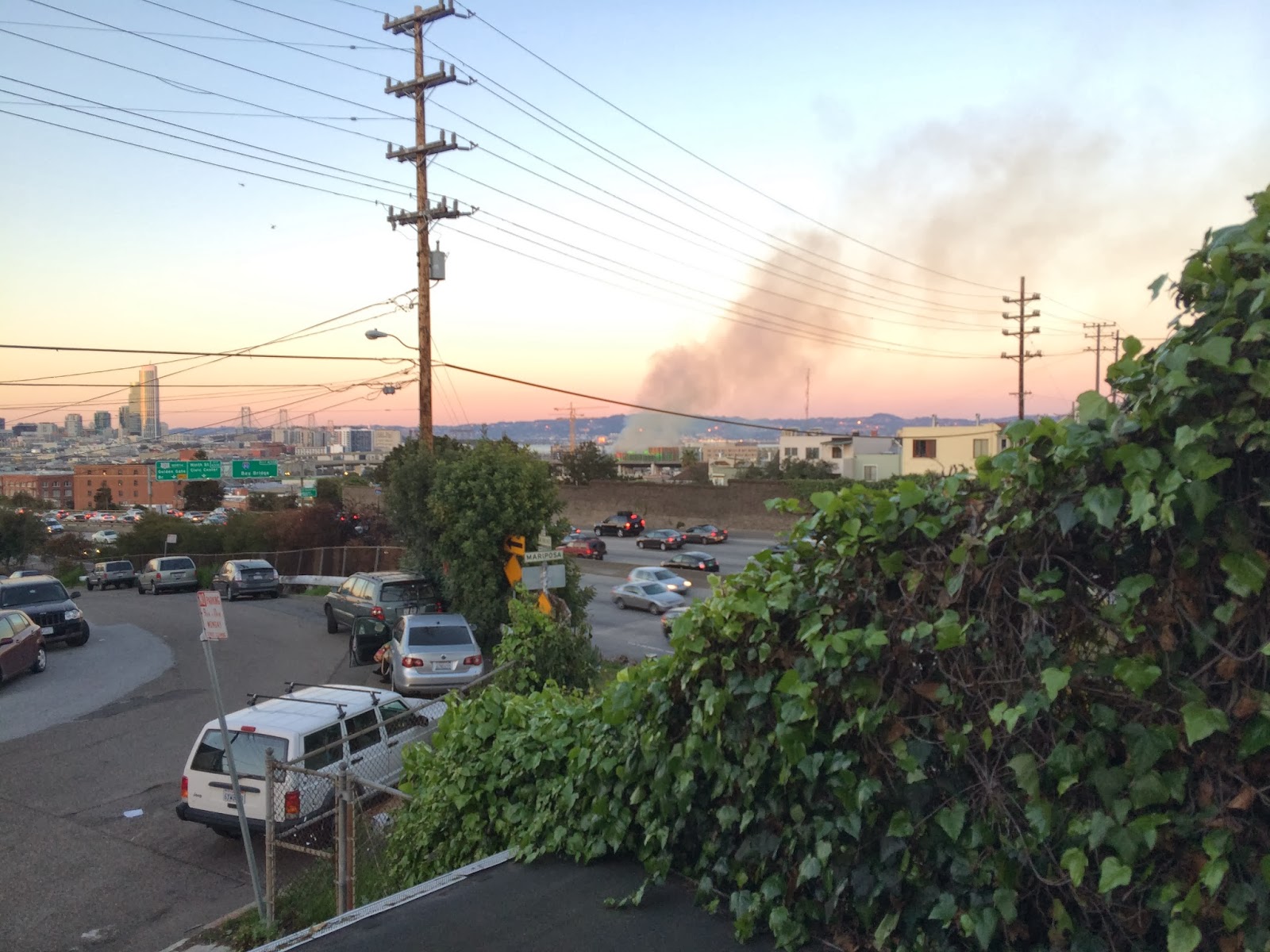