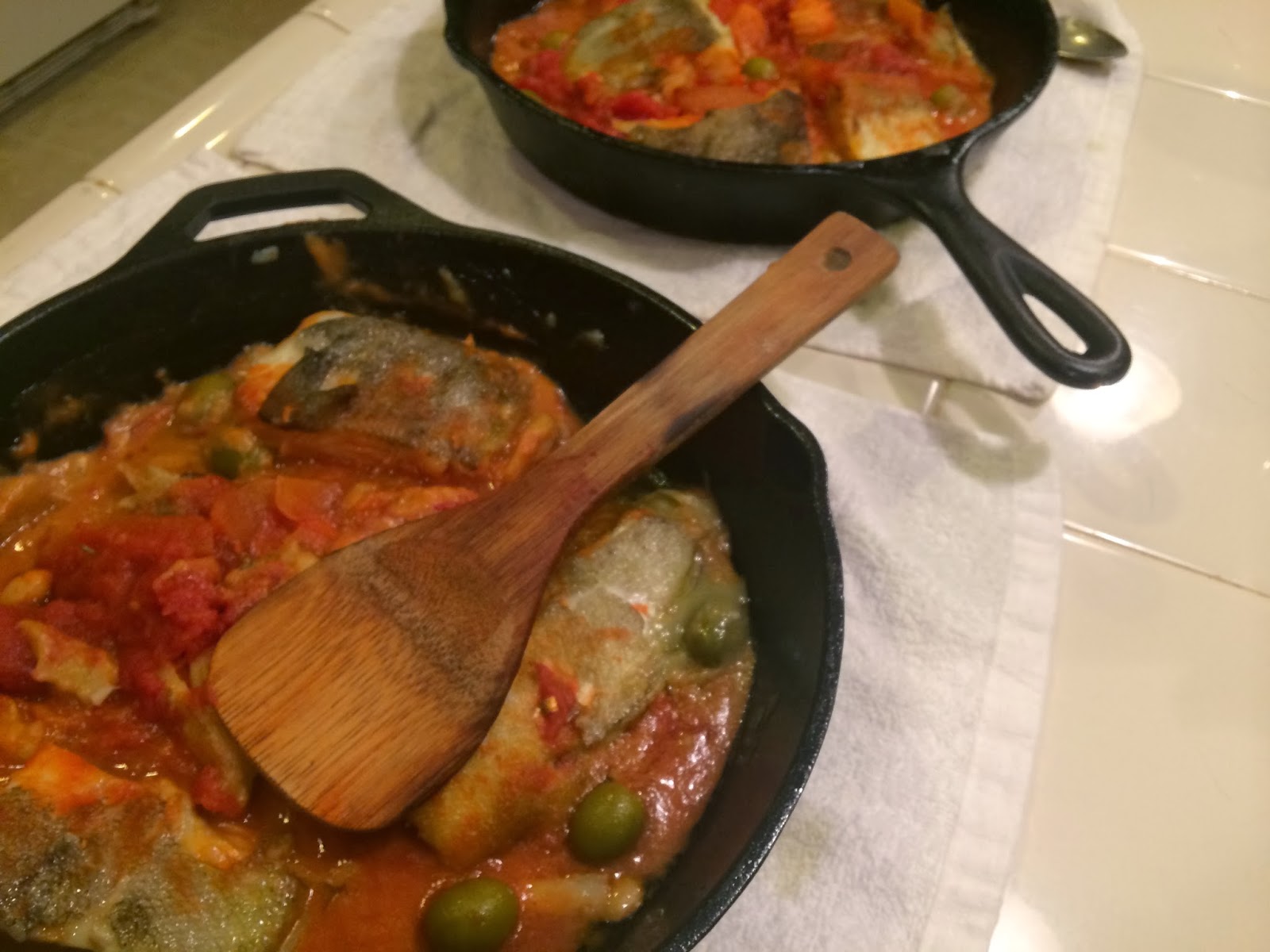 Or like when you're struggling to remember the name of the guitarist for The Police and all of the sudden your Facebook feed is telling you that Andy Summers has a new photography exhibit and would you like to "like" it.

The other guy in The Police is some bloke named Gordon Sumner.

Me and 99% Bittersweet had a moment of synchronicity recently whereupon the universe seemed to be sending us a clear message: salt cod.

For me, the idea rattled around in the back of my head during my lengthy trek from Grass Valley to Newman, California.

Newman is a post-Gold Rush town in the middle of farm country, founded by Simon Newman in 1888. In the center of town is a 1940s cinema (The West Side Theatre) in the art deco style, that has been restored.

What had been rattling around in my subconscious was one store in particular, a bodega called JJ Liquors. Here you could not only pick up your scratchers, a bottle of whiskey and perhaps a bag of chicharrones but you could browse a surprising array of Portuguese delicacies: linguica, imported cheeses, Portuguese wines and spirits, cookies, candies and of course bacalao.

In the back of my head I knew I wanted to try cooking bacalao, salt-cured Atlantic cod, and I knew exactly how I wanted to cook it. What I didn't know was that at the same time, separated by many miles, 99% Bittersweet was thinking the same thing. The. Same. Exact. Thing.

"So we'll hit JJ's in the morning," she started as we disembarked from their mini-van at their home in New Newman (what I call the exurb that sprang up along side Simon's little farming town), "and I was thinking maybe we should get some bacalao!"

"Oh yeah, I was thinking that too. Maybe we could do like a stew like the one..."

"Exactly! How did you know?"

"It was on Hulu the other day," she continued. (We searched, there was no sign of it on Hulu. Here's a link to the episode on Vimeo, however.) 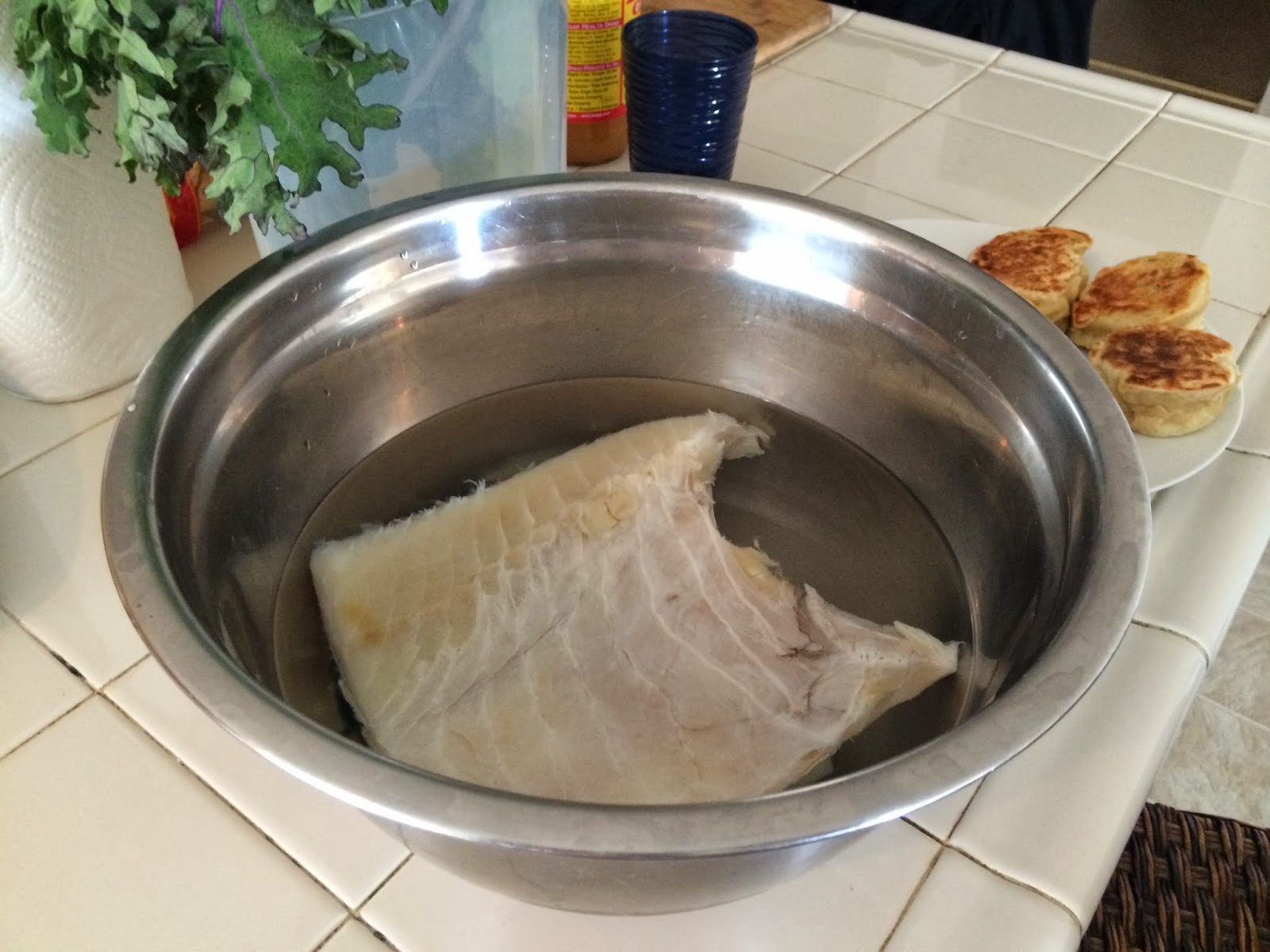 Chowbaccalao!, Inspired by A Cook's Tour: 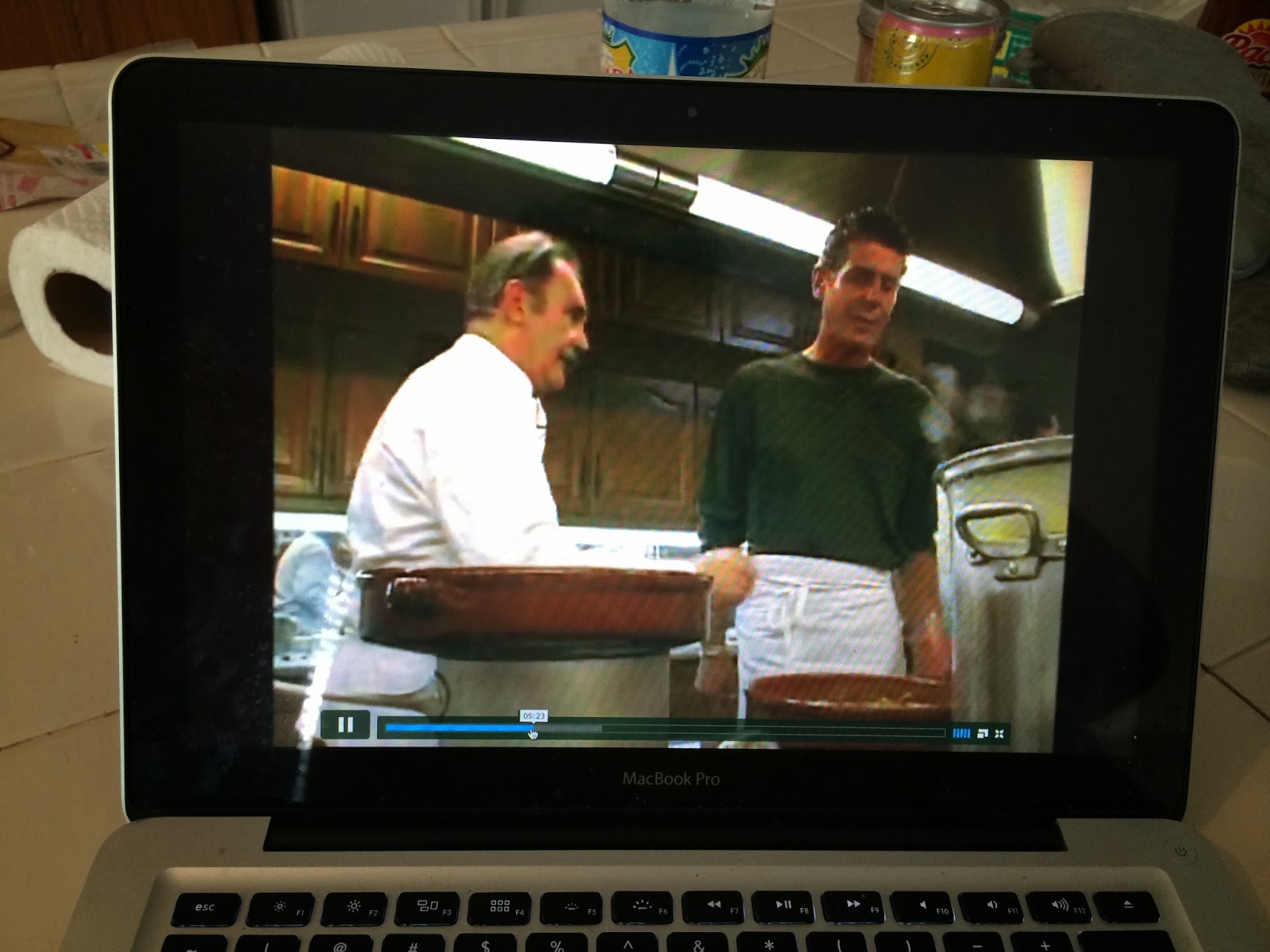 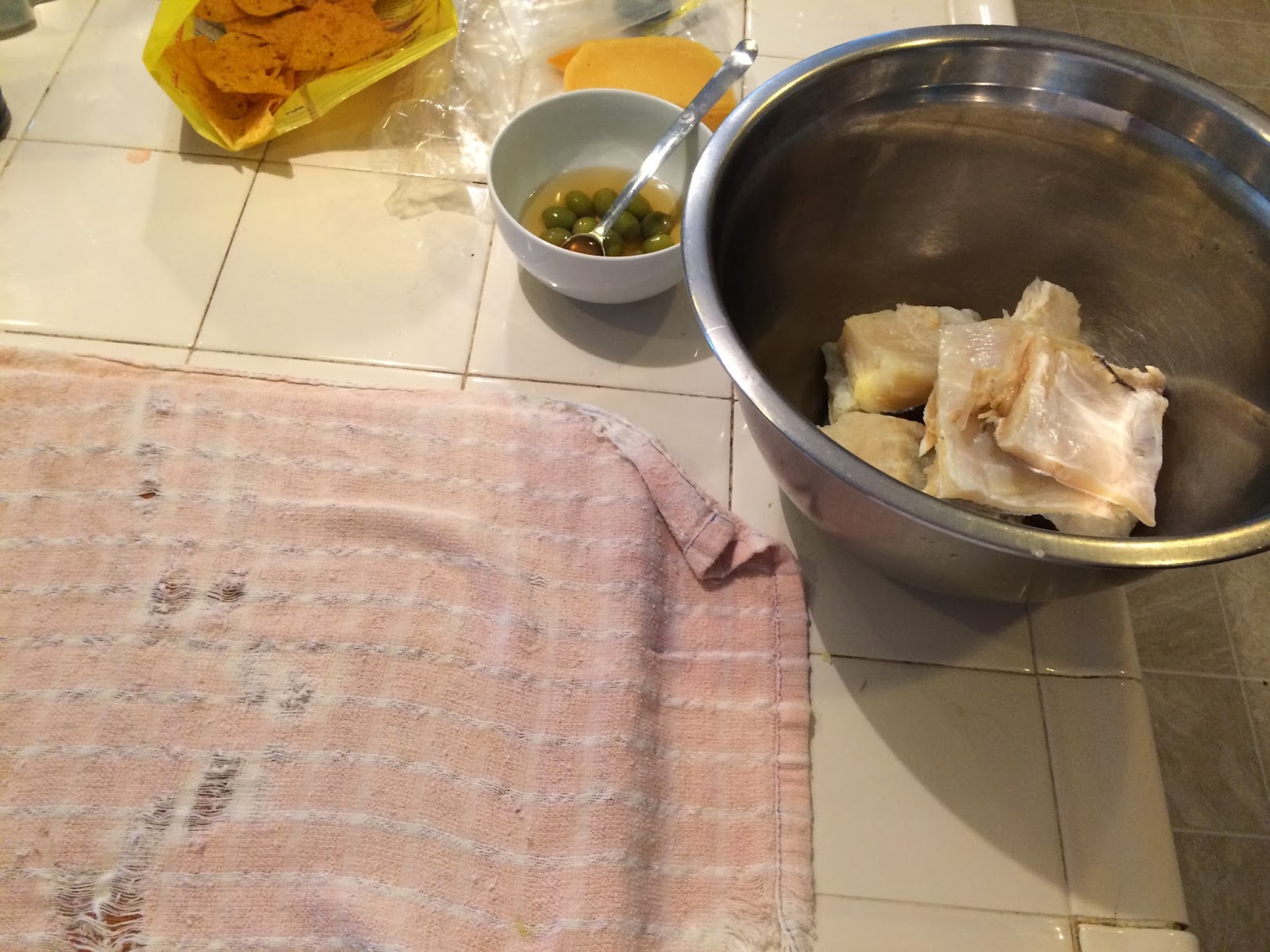 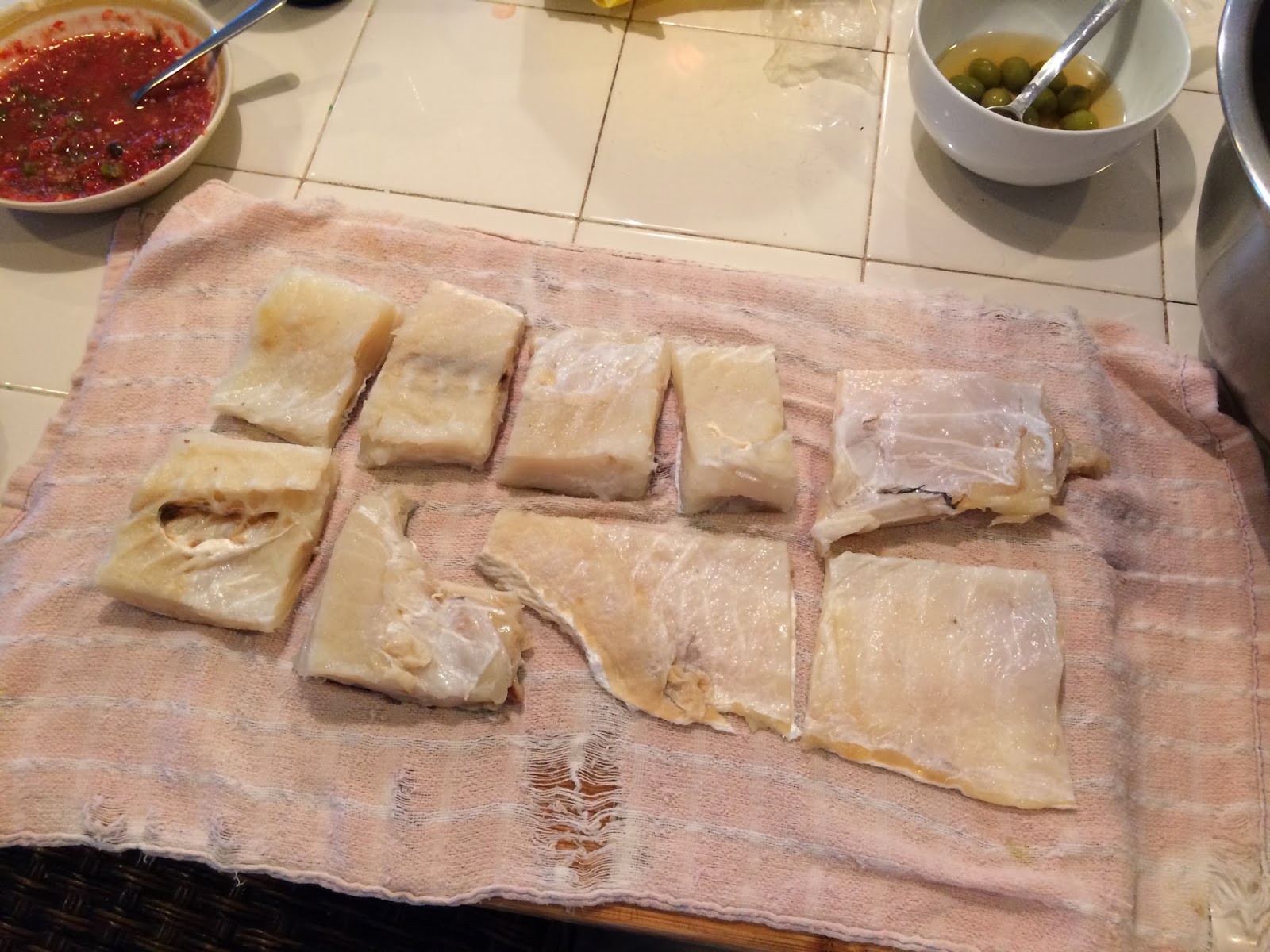 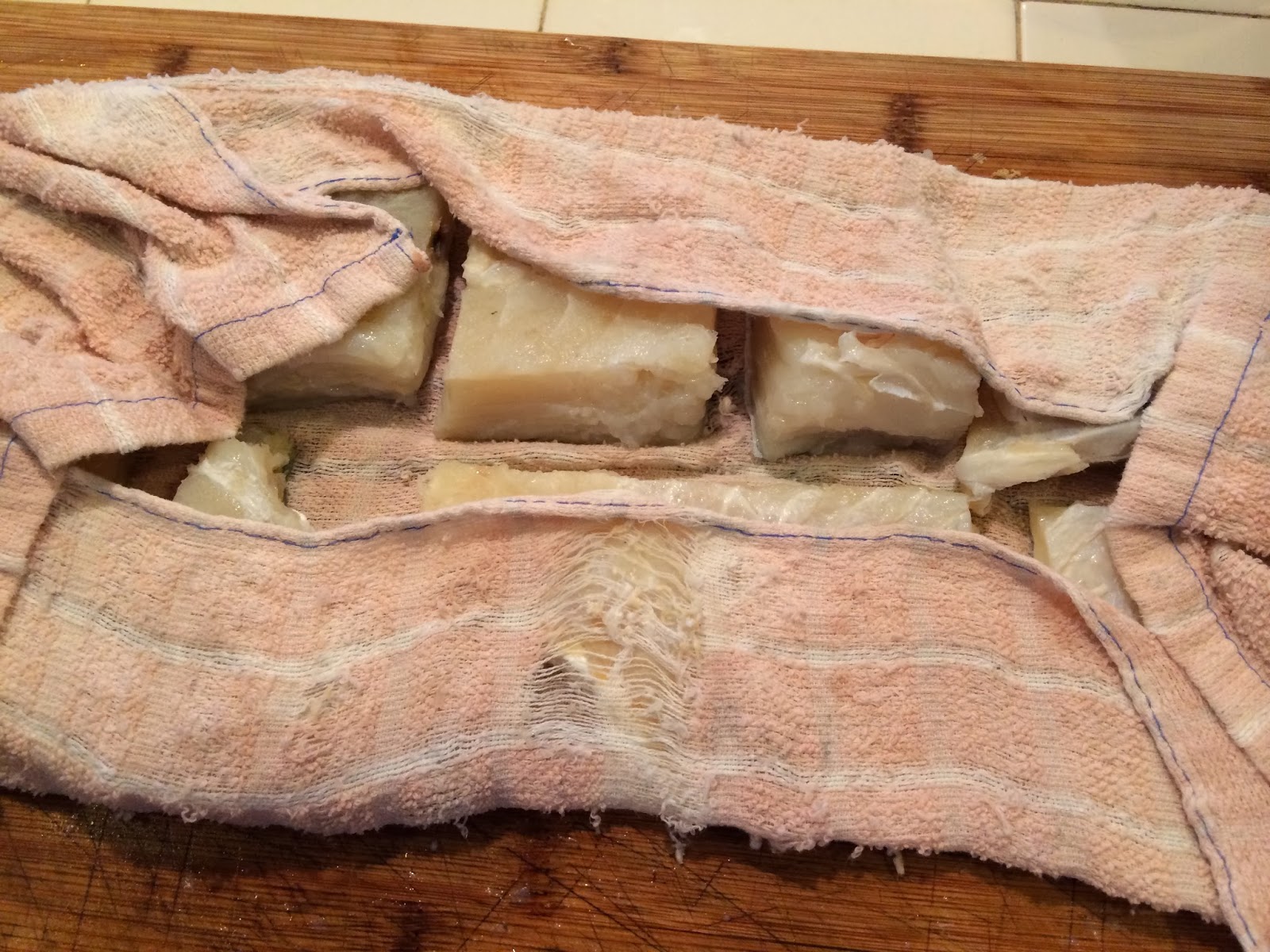 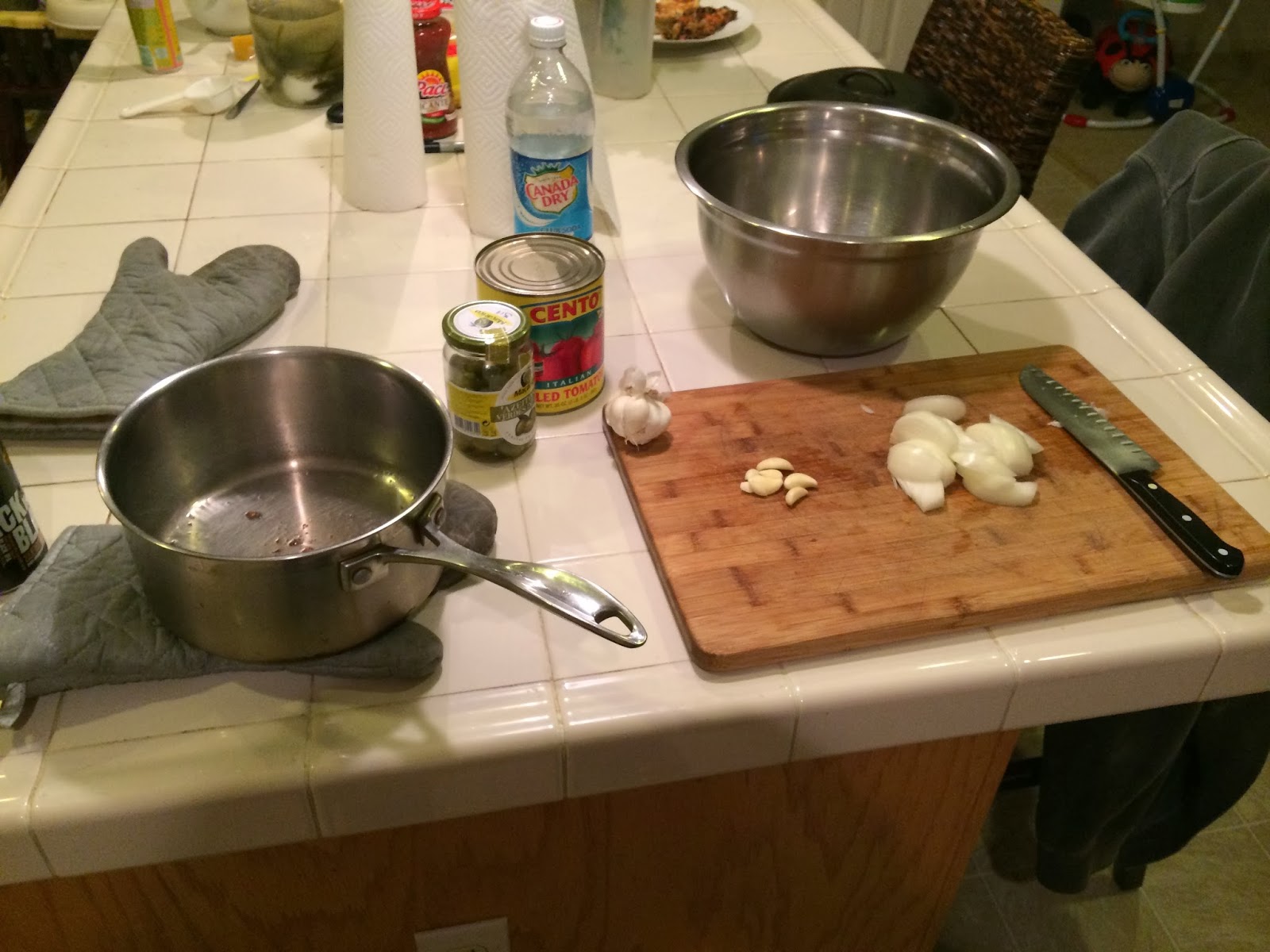 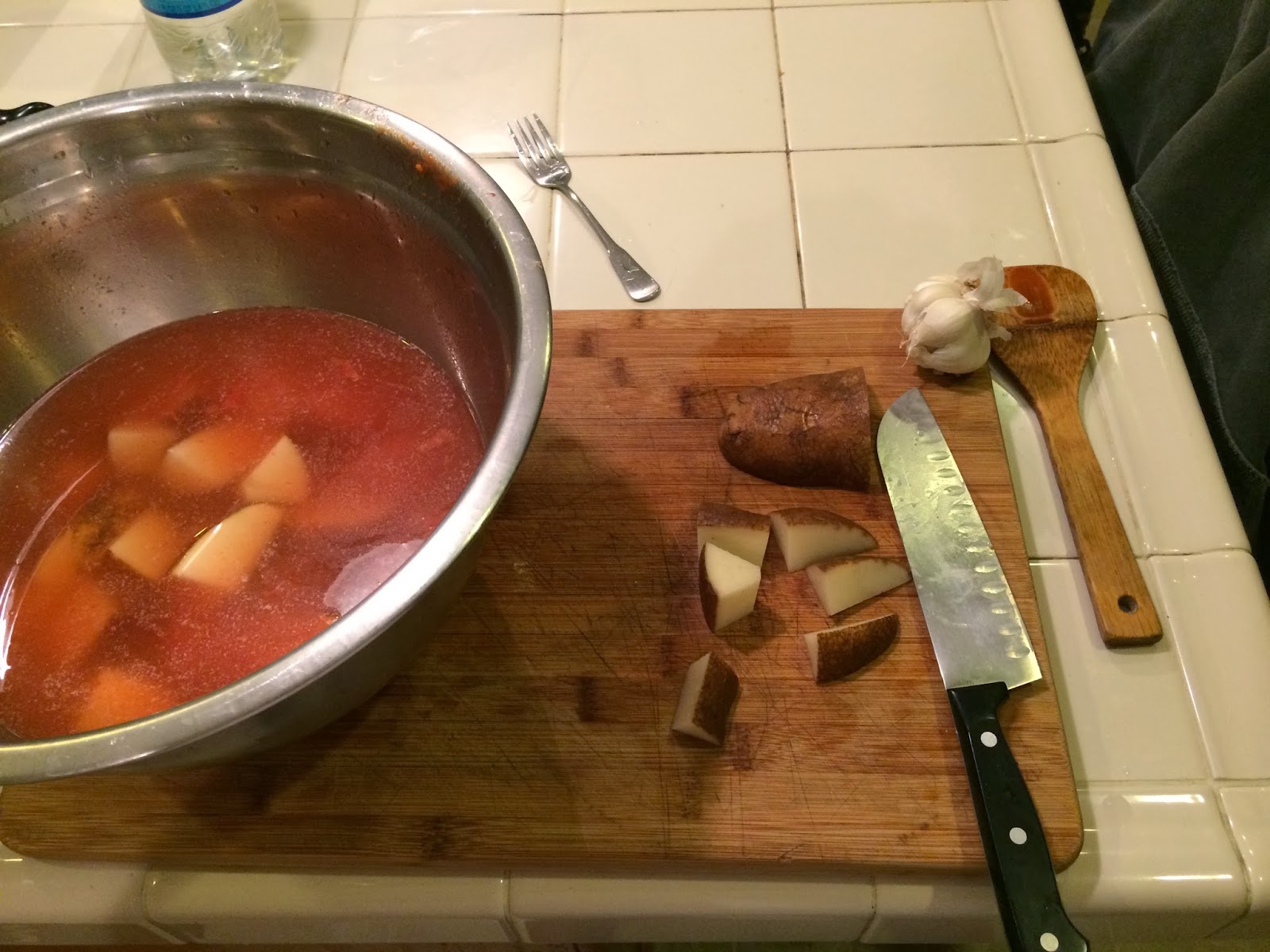 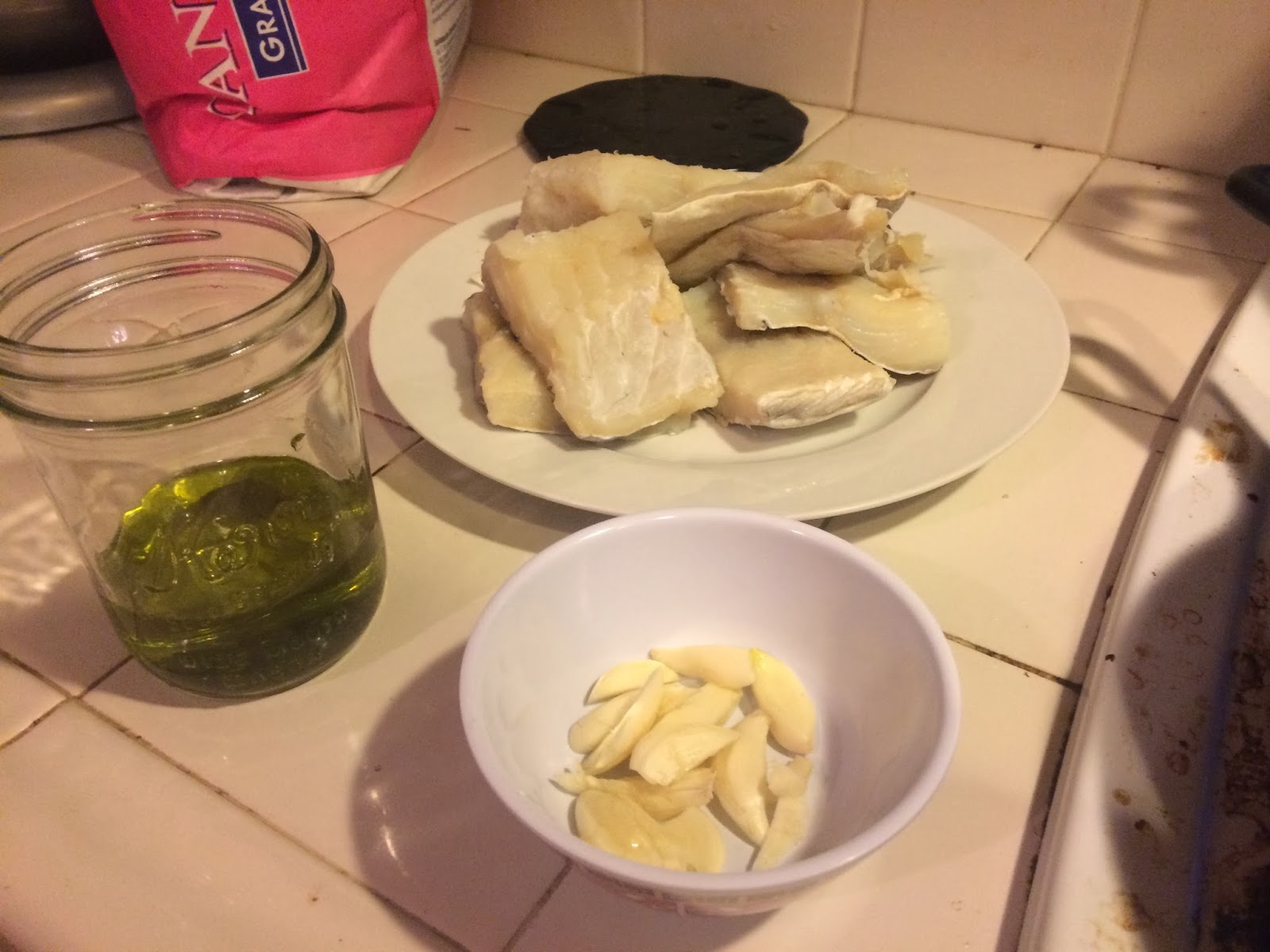 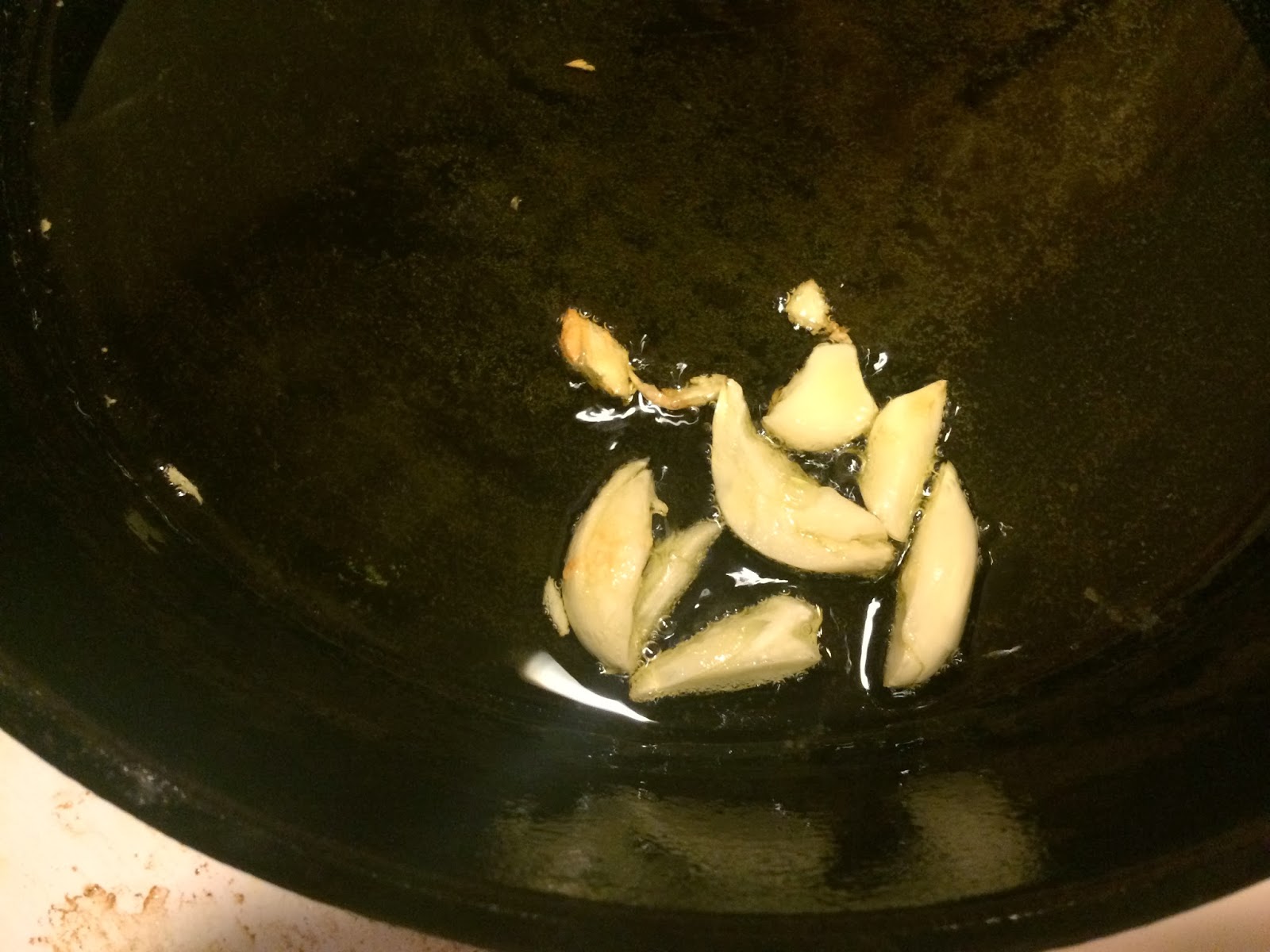 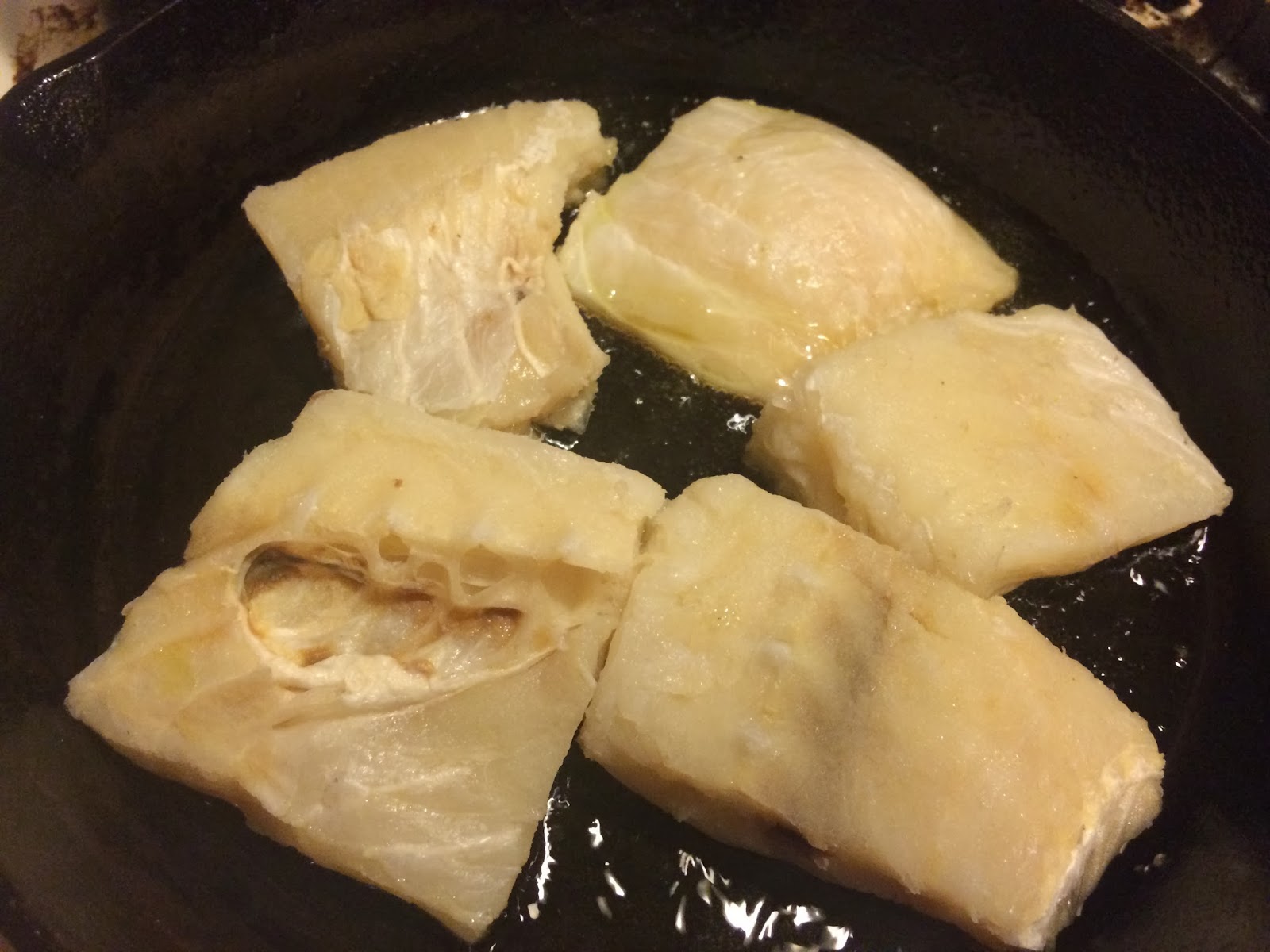 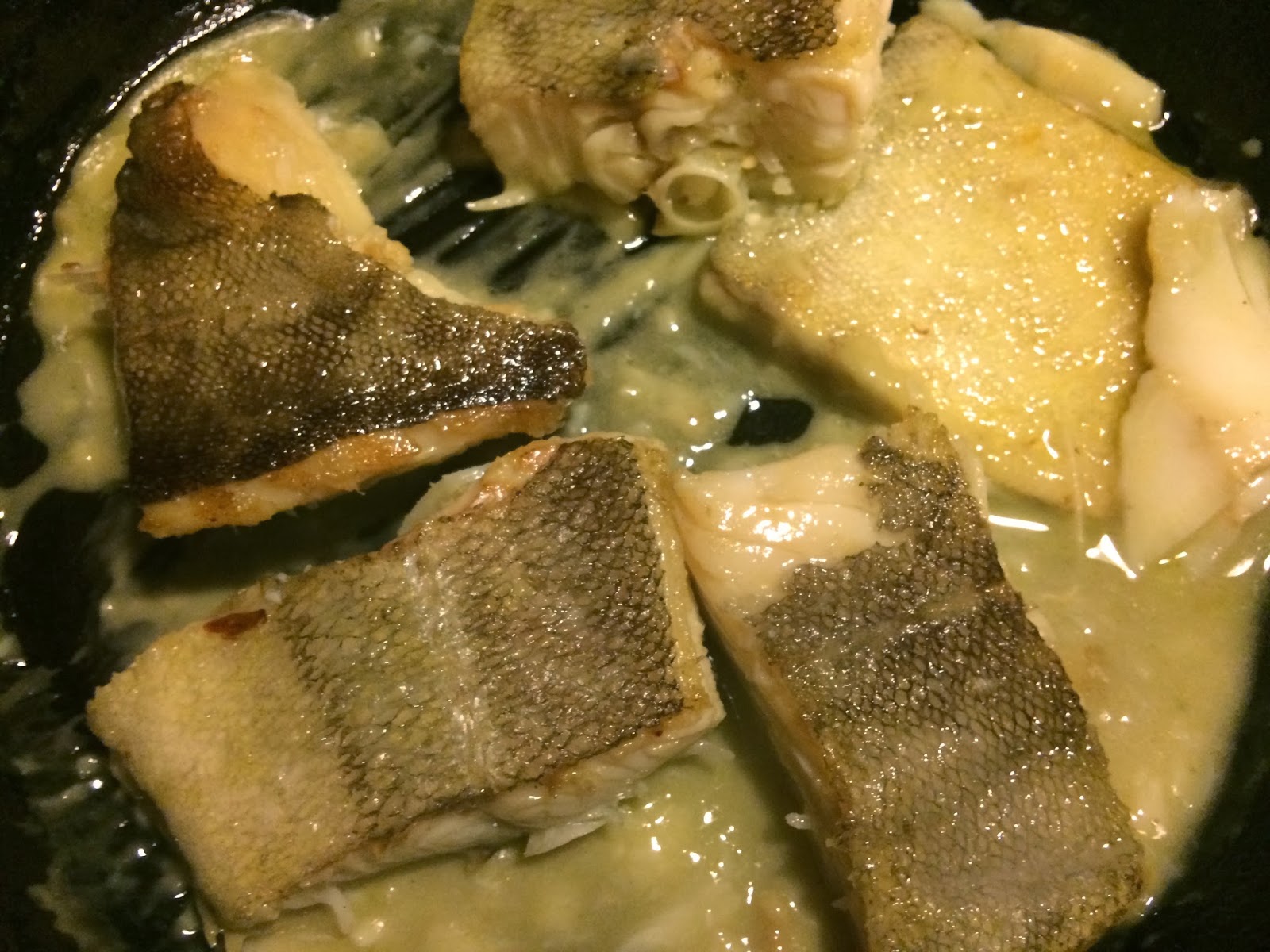 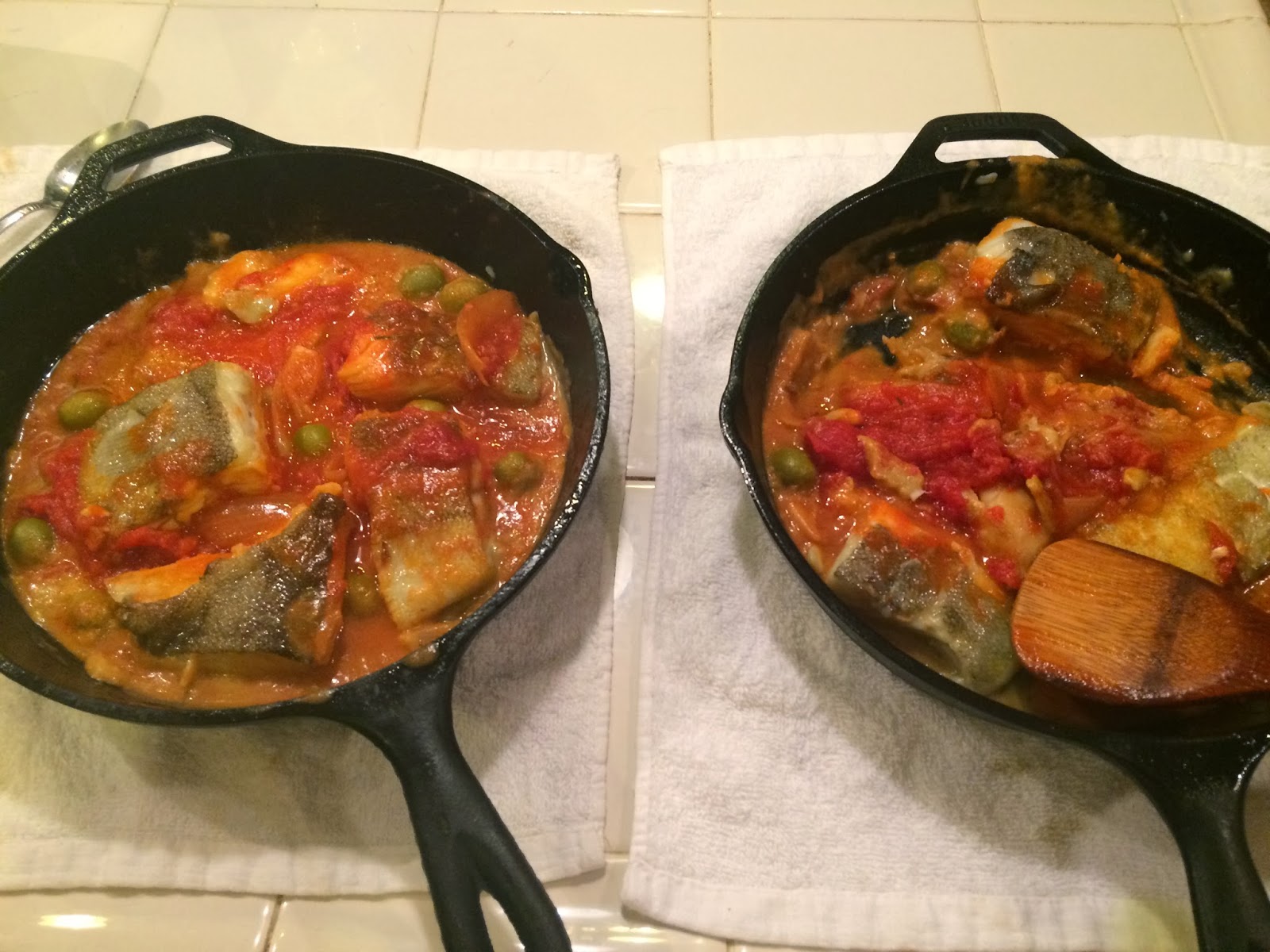 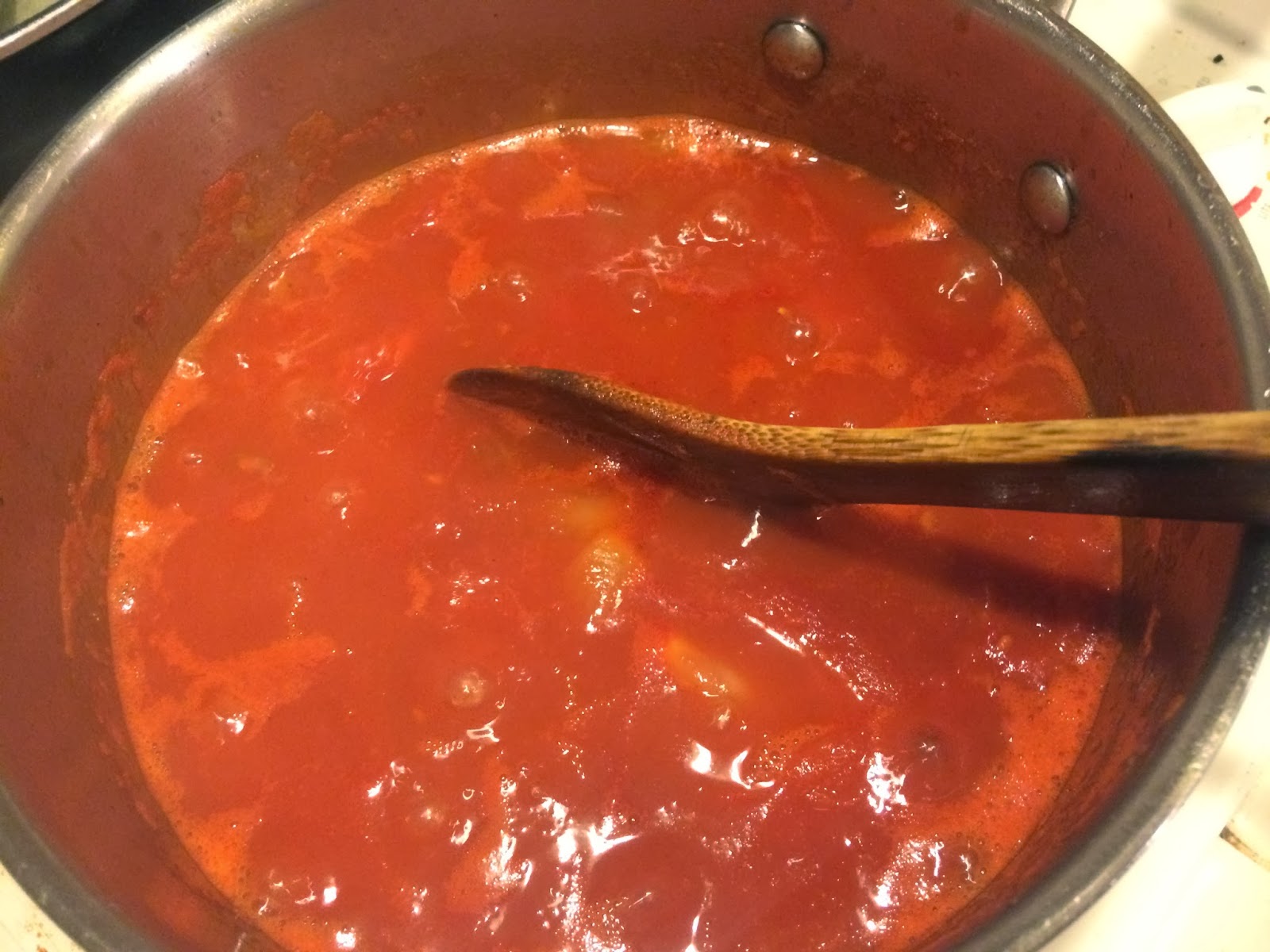 This is your basic tomato sauce preparation.

Start by sautéing the onions and garlic in olive oil over medium heat, adding some salt to help the onions to start to "sweat."

Once the onions begin to soften, add everything else.

Bring everything to a boil, cover and reduce heat. Simmer for about 20 minutes, then uncover. Bring back to a healthy bubble and reduce slightly so that the sauce "tightens up," or about another 10 minutes of cooking. Stir occasionally to prevent the sauce from burning at the bottom of your sauce pan.

Cover and set aside while you get your batata frita going. 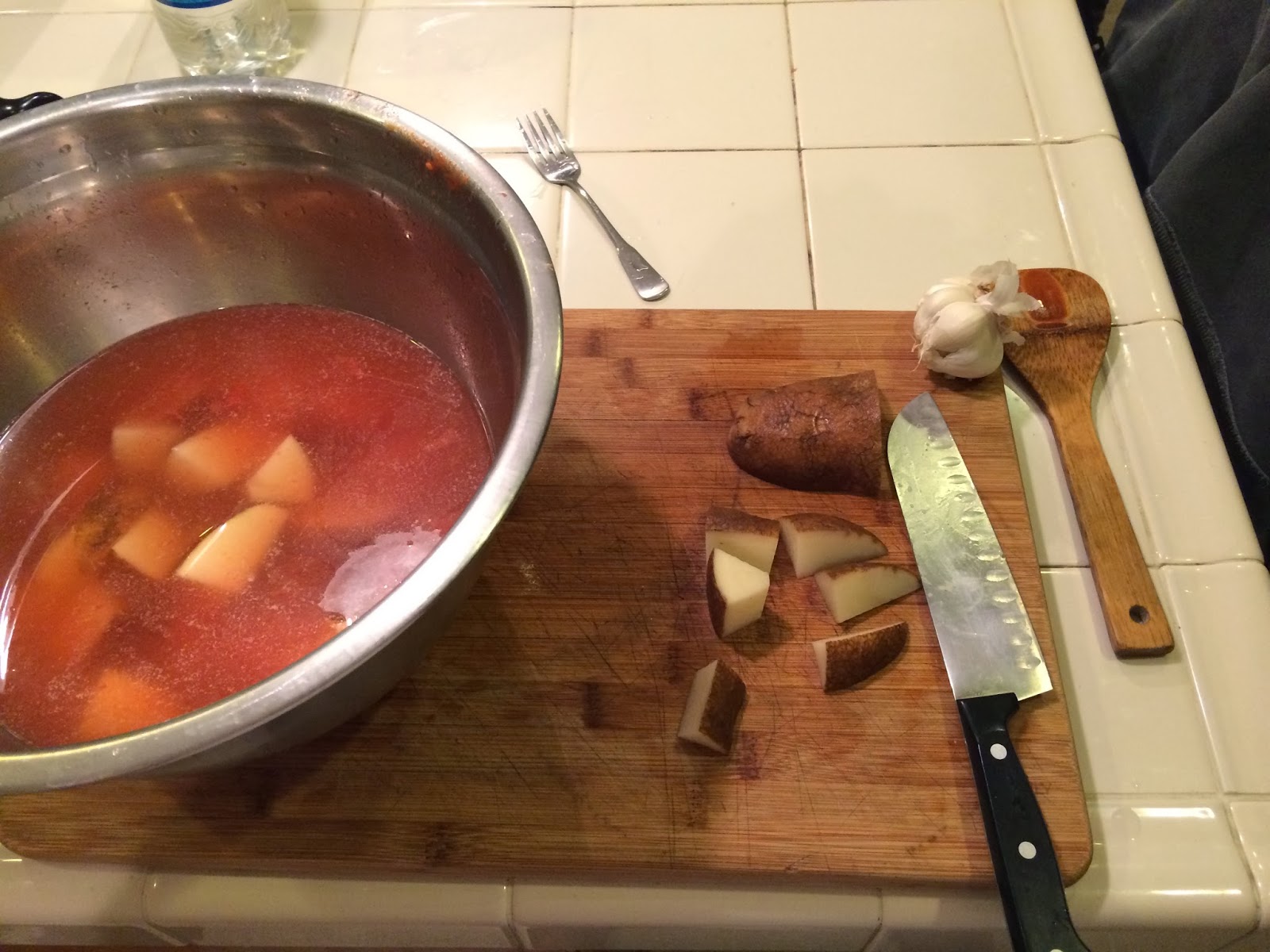 Speaking of stealing shit being inspired by others, this is the fry method used by Mad'M'Zelles Poutine:

Batata Frita (Fried Potatoes):
Brine your potatoes for up to 6 hours but for at least an hour before blanching.

Drain potatoes and all them to drip-dry for several minutes while you bring your cooking oil or fat to about 320ºF (let's say medium heat) in a straight-sided large frying pan or cast iron skillet.

Blanch potatoes for about 6-8 minutes until they begin to cook through but do not brown in the oil, working in batches so as to not crowd the pan.

Remove potatoes and set aside in a metal work bowl.

Set your frying pan and oil aside while you work on the cod. When the cod is assembled, set those pans aside and return your frying pan to the stove, this time heating to about 375ºF (let's call it high heat).

Fry potatoes in batches for about 10 minutes over high heat until they are GB&D (golden, brown and delicious). On the last batch, when ready, return all of the potatoes to the frying pan to reheat them all evenly for about a minute.

Scoop them out with the spider onto a sheet pan lined with paper towels while you clean and dry your metal work bowl.

While still hot, toss potatoes in work bowl while sprinkling with kosher salt.

Arrange potatoes on your serving dish and grate cheese over potato (if you use a microplane grater you get a lovely "snow" effect).

Reheat your cod stew and serve! 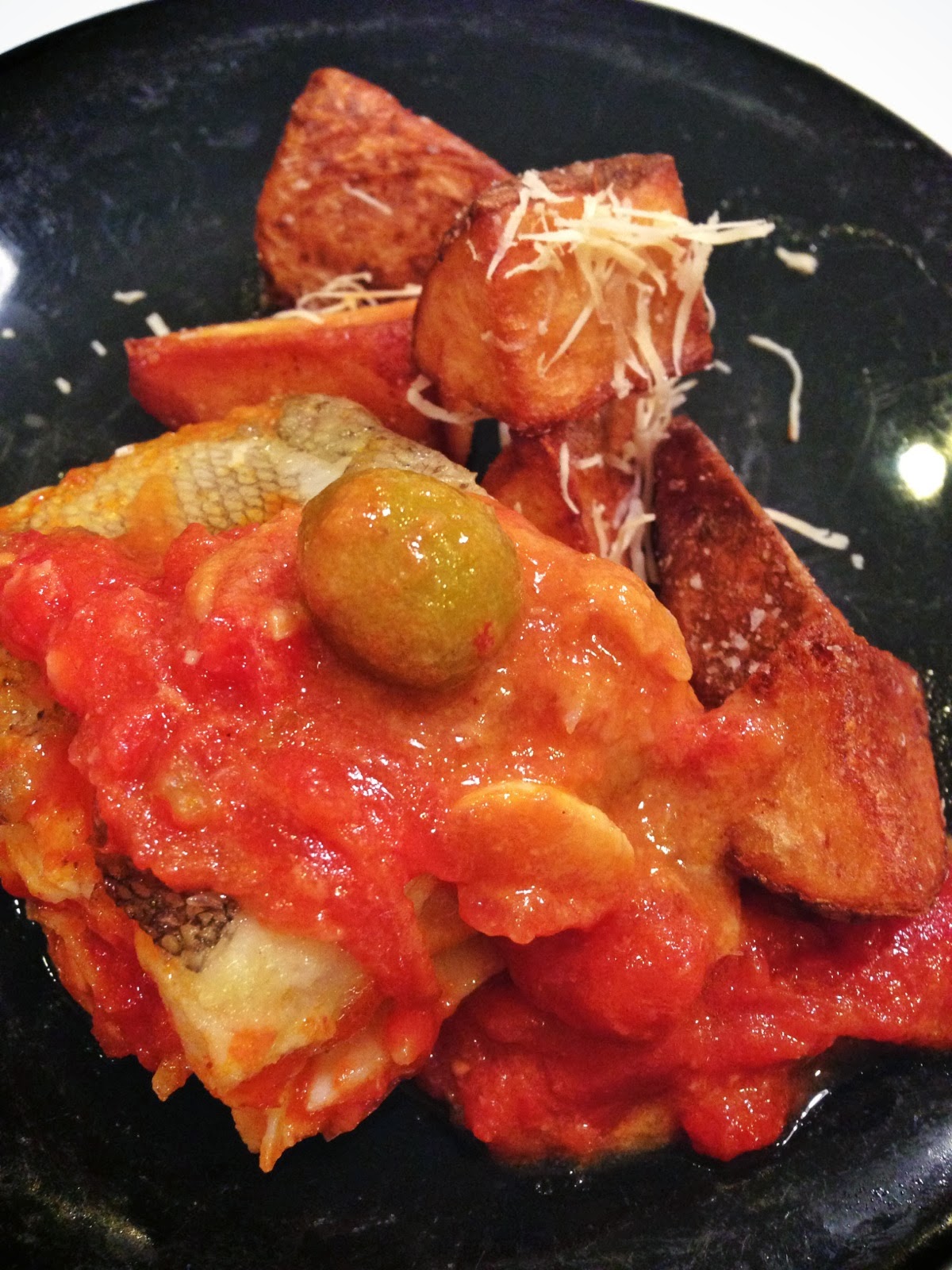