Skip to main content
Labels
Posted by Dottore Gus May 08, 2014

Photos of the Day: Lee's Deli and Med Café

The Up Band (by Jawbone) encourages you to take pictures of what you eat.

Well, you have the option, then you have to enumerate what it is you actually ate.

Normally I have a salad for lunch, but I mean that in the loosest possible definition of the word.

Still I like to think I get more vegetables than the average FiDi dine-and-dash salary worker.

Café Med, around the 1st of April and hence my birthday. Two weeks, no drinks. I had just discovered this joint ($6.75 for the buffet).

The tuna salad was a disappointment, as I (should have) guessed.

I was wondering when I was going to start sleeping normally, if that was a thing that sober people do.

Early visits to Lee's Deli had me eating a lot more dumplings, but I'm cutting carbs where I can now.

I allow myself a near-beer or two at Lucky 13 to feel like a normal person. 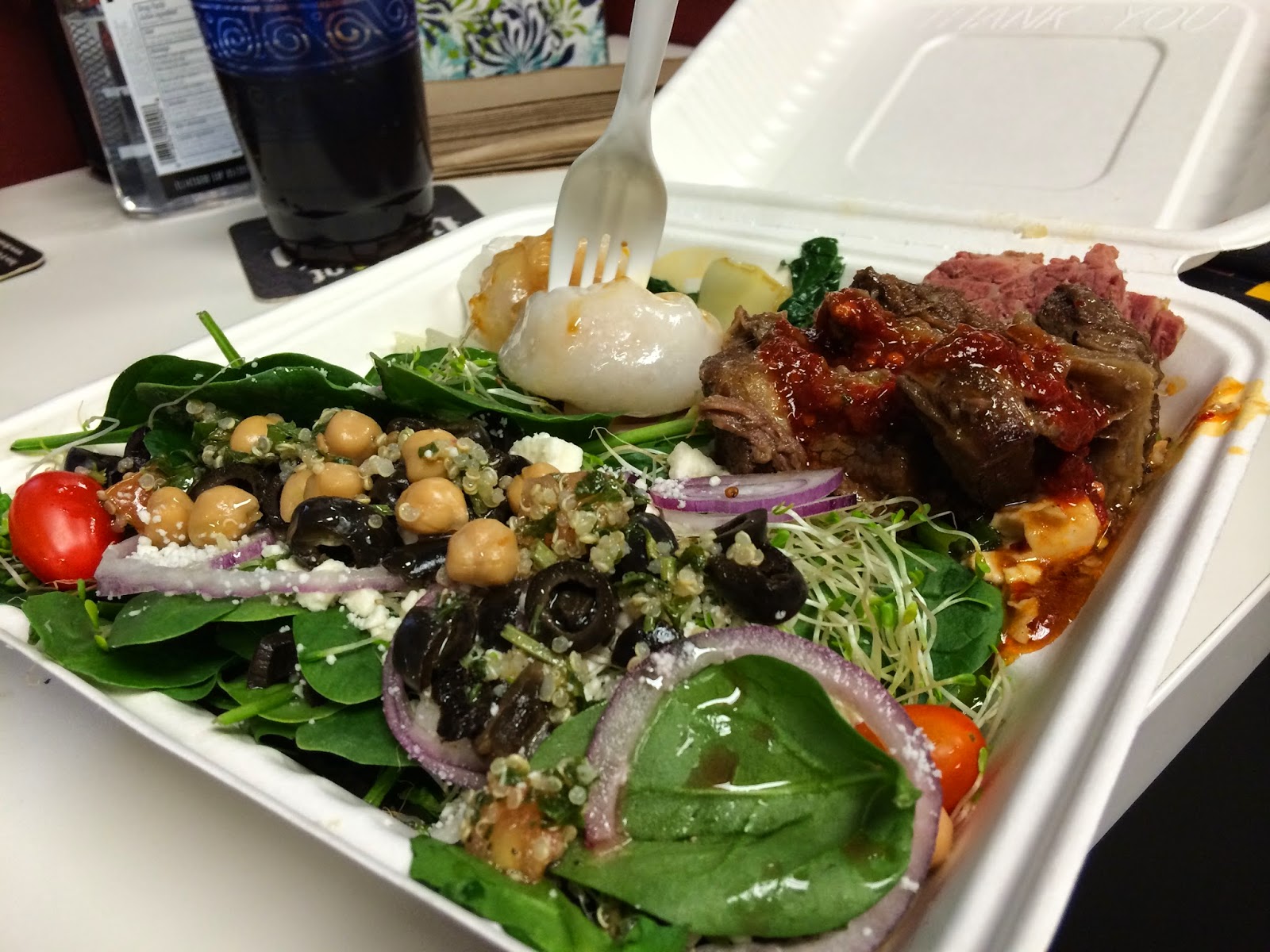 My friends take me to the Russian River for my birthday. 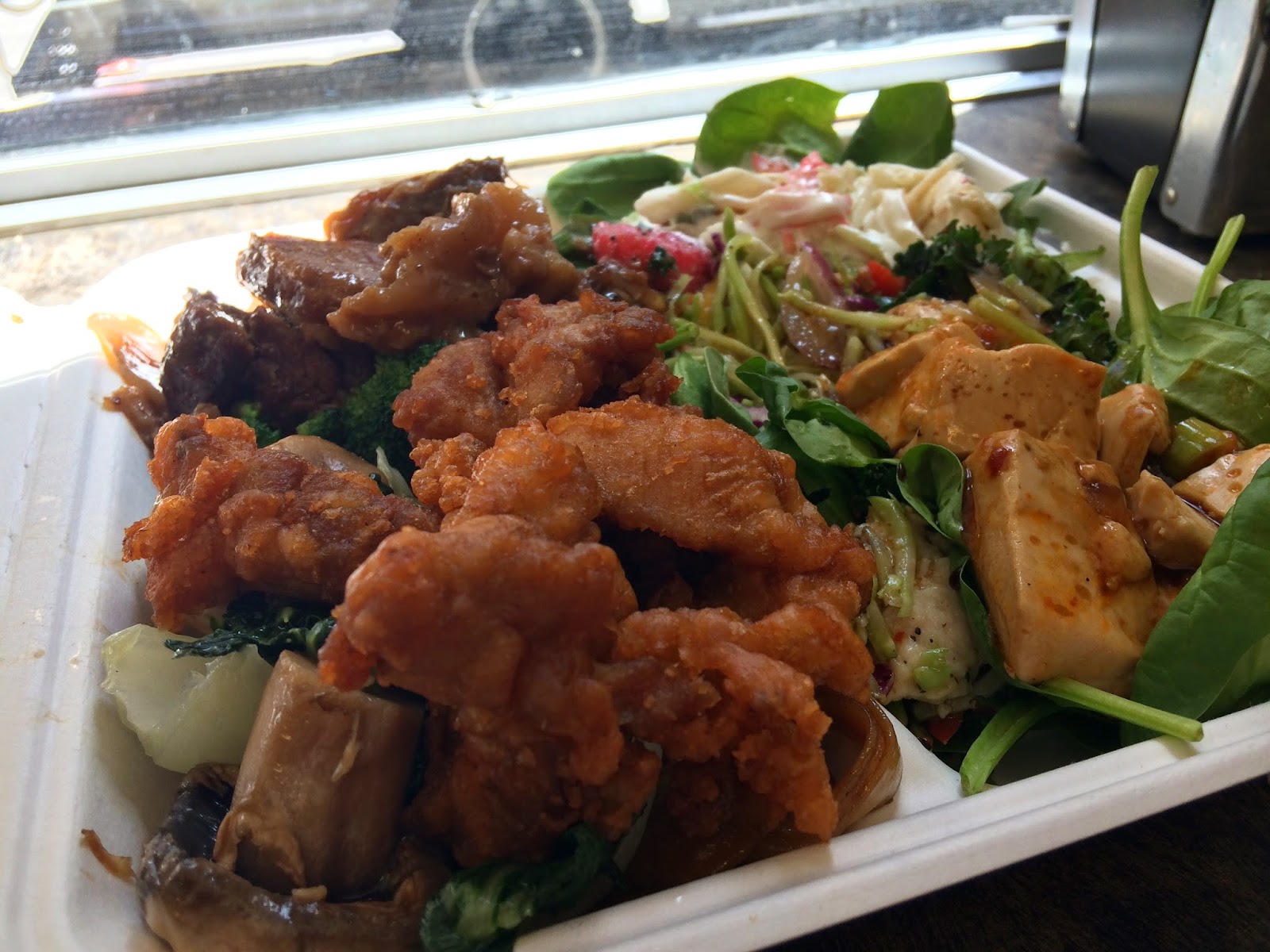 Got up to bike in early - Bike To Work Day - and proceeded to just trip all over myself all day long like a friggen amateur. In front of my new cow-orkers, in front of my new boss: a Director of IT who looked like he belonged outside a SOMA bar bouncing underaged girls and hangers on.

Of course, I was an actual bouncer (on occasion). Maybe I should re-evaluate my career? I felt like it by the end of that day.

No. Bar work is good, honest work. And I have no business working in a bar.

Not any time soon at least, I hope.

So I pedaled to the gym after work, past bad drivers, right turns in the bike lane, people who can't signal, pedestrians crossing in the middle of the road.

I passed a model, a "booth babe," in candy red stiletto heels with 6" spikes and a matching mini skirt passing out flyers at Moscone Center. Nearby a more sensibly dressed body-man, a large Pacific islander in black khakis and a windbreaker, made small talk and kept a hand on a two-way radio.

I regarded her with sympathy and smiled weakly as I pedaled past, a chill in the wind that whipped her straight black hair.

I didn't go to the gym to work out but to soak in the hot tub with the old men, the Chinese ladies, the tattooed neighborhood dudes - Latin boxers whose other qualifications probably remain best unquestioned with tattoos whose meanings I deign not to ponder.

I left and made my way out of the garage, a semi-cavernous lair resting atop the buried ruins of Seal Stadium, and into the evening air, now thick with mist - as if Karl himself were giving the city a hug.

I stopped in to Mission Hill Saloon and was greeted with a bitters and soda and an array of buffet food.

Buffets, I can't escape them.

It was NFL draft day.

"Drafts," I thought to myself. "I write a blog. I should write something."

I ate some chicken wings, watched the Portland Trail-Blazers fall behind the San Antonio Spurs in the first quarter and walked my bike up the hill in the mist.

I guess writing's healthier than drinking.