Once Again In A Pickle

Some bloke, I think it may have been K'ung Fu-Tzu, said "may you live in interesting times."

Confucius, as he is more commonly known in the West, can suck on an egg.

These have been interesting times for yours truly, so what better time than to make a big batch of pickled eggs.

It was time anyway: I had nothing better to do; I needed to clean out my big glass pickling jars and consolidate whatever was in them; my kimchee supply was running low – and it's just the right time for daikon and napa cabbage to be in full swing; I wanted some pickled summer beets (these tend to be more delicate and a little sweeter) and well... I just love pickled eggs.

To be fully honest, the first time I'd ever encountered a pickled egg was on the shelf of a bar we affectionately referred to as "Trees Lounge" (due to it's resemblance to the film), The Knotty Pine, an old-man dive-bar pool hall for retirees and daylight hours coke dealers.

Whole chicken eggs were suspended in an industrial, Costco-sized glass jar behind the bar with a respectable film of dust on the outer edge.

My roommate at the time, Sparky, dared me to eat one. I begged off. He said he'd eat two if I bought him a round ("...make me another boilermaker..."). This is when I began to realize the depths to which Sparky would plummet in order to, first, get a free drink and second, gross people out to impress them.

What I didn't knew then is that pickled eggs are delightful!

When I finally got around to eating a pickled egg it was in the much more manageable form of a pickled quail egg at an establishment where I was sure they had not been sitting in a jar for years.

That was at Riki's old job, The Alembic.

I emptied these into two bowls, one containing the remaining pickled matter (a scant amount of kimchee and a dozen and change carrots and dragon radishes cut lengthwise, some shallots and some rosemary) and the other containing the run-off brine which I strained through a fine latex mesh strainer that 99% Bittersweet had gifted me on my last visit to Camp Newman.

I let the gaskets, or washers, soak in hot bleach-y water with some other glassware I was sterilising and soaked then washed my large jars in scalding hot soapy water.

While soaking, I started prepping a large batch of kimchee and boiling my eggs.

In a 8-quart stock pot I placed the eggs, room temperature, at the bottom of the pot then slowly filled with hot tap water to the "knuckle" (the rivets where the two handles are fastened to the pot). I added a generous amount of kosher salt.

I placed this directly on a hot burner and let it come to the boil. I closed the flame and kept the water and eggs covered with a lid for about 5-6 minutes while I finished cleaning the jars.

I peeled my beets and cut them in half radially, and cut the beets into segments like oranges.

Those I lay on the bottom of my jar, followed by peeled medium boiled eggs (the trick I have found is to peel them submerged in water, although there's a cooler looking trick that involves using a spoon to remove the egg like an avocado that I haven't quite got the hang of yet).

I added a little Korean chile flake salt mixture and then topped the eggs off with my carrot pickle brine (which I am assured is not only very high in acid but also salinity).

Eggs should be ready to eat in a few days, refrigerate after 5 or so days. Eggs will keep for months, and when you're done you'll have delicious pickled raw beets. 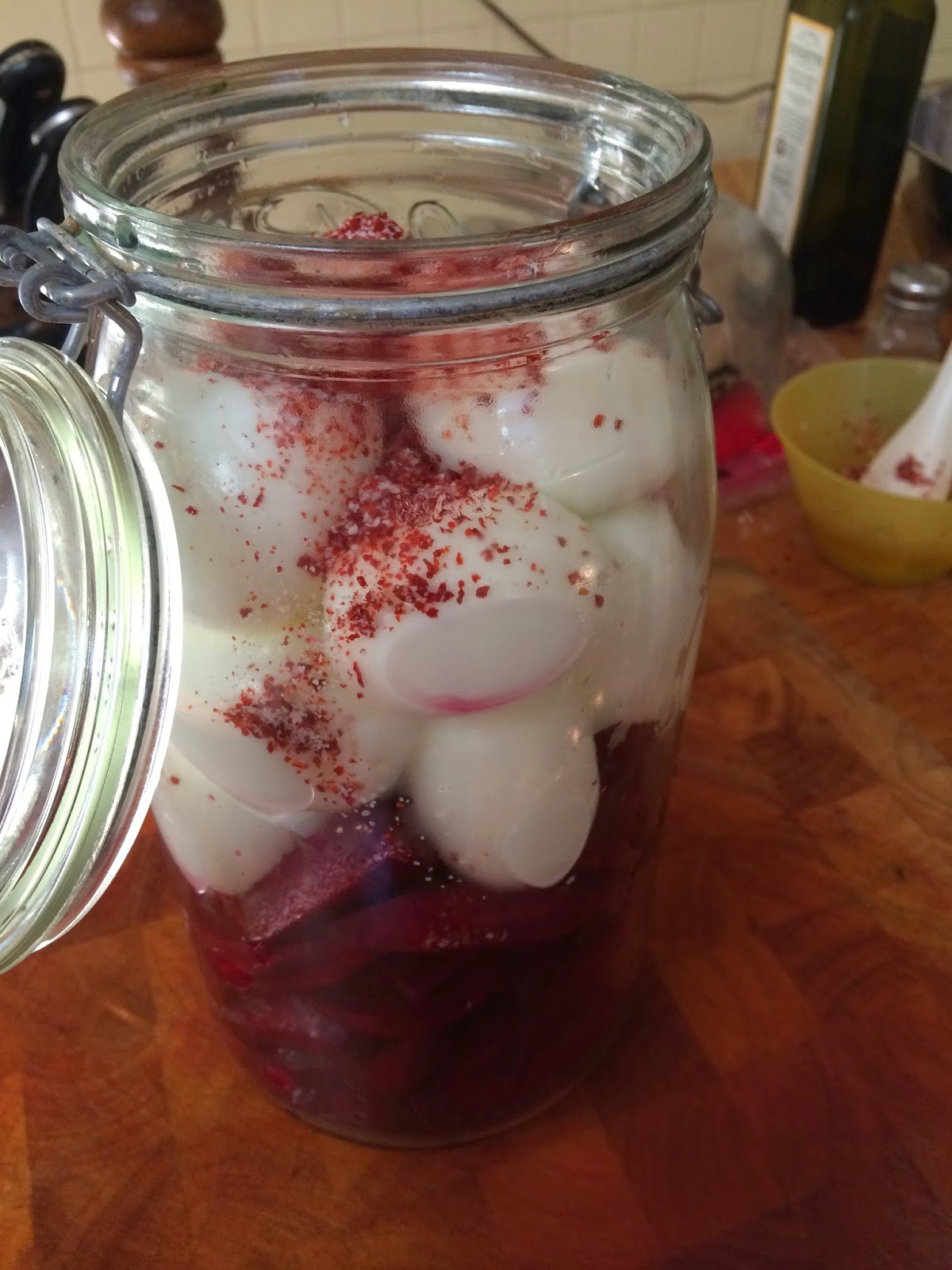 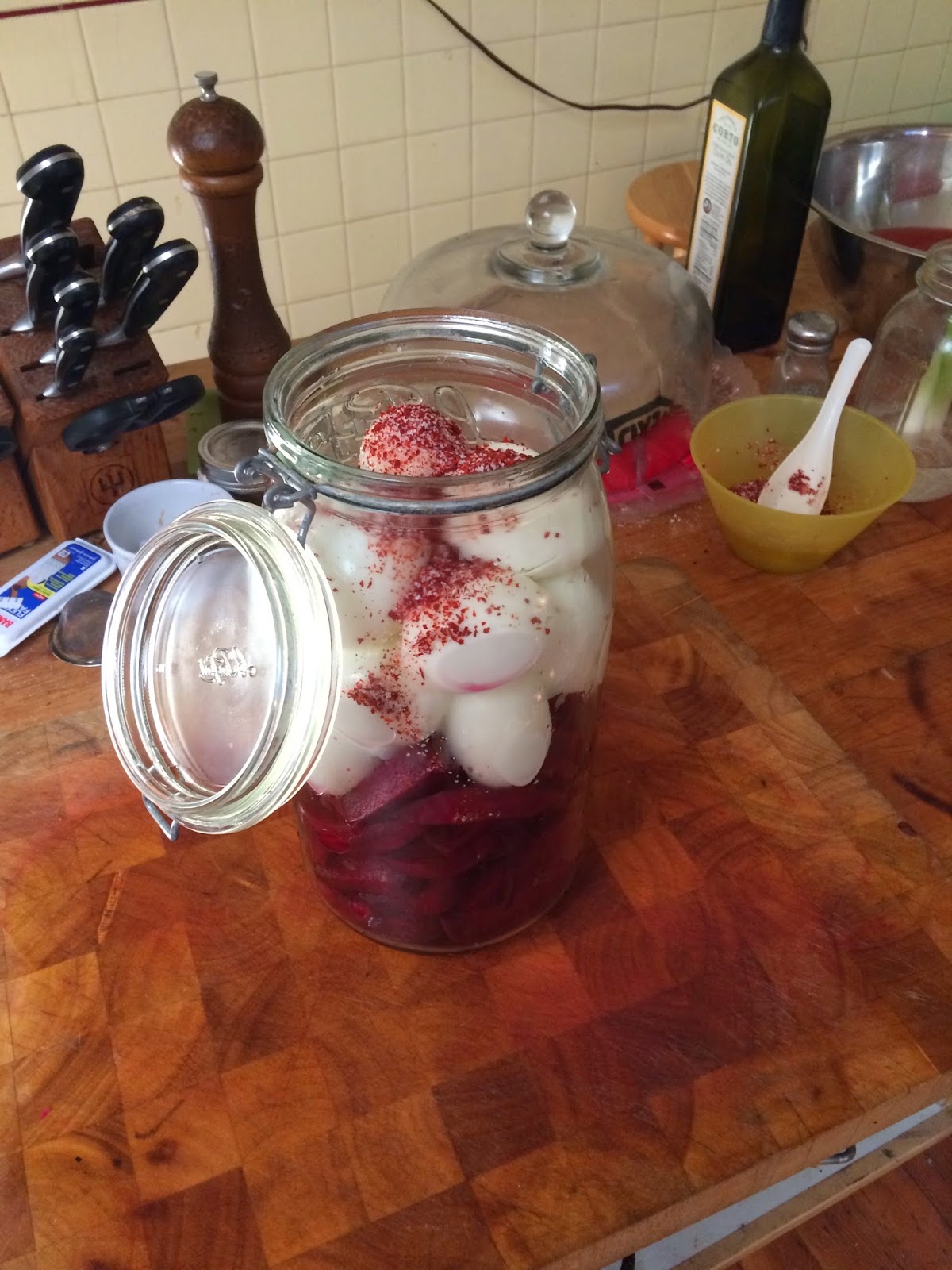