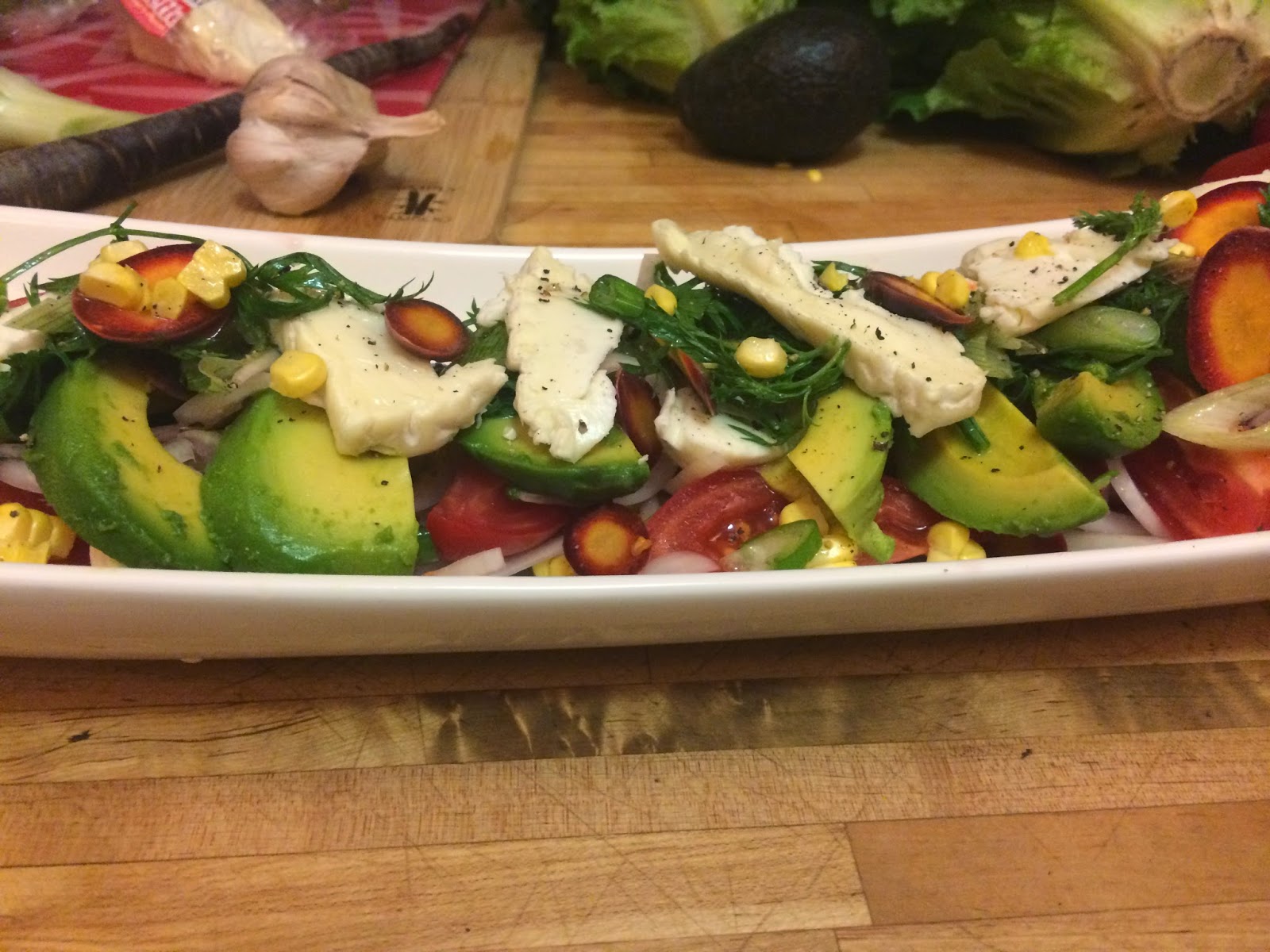 I had planned on joining my father, ISM, my older sister Jenny and her husband Mike and my little sister Missy on a day trip to the Willamette Valley to visit a handful of wineries on a sunny Saturday afternoon in Oregon. Fate had intervened to make this impossible.

I spent the day instead in a dizzy state, drinking multiple glasses of Tito's Handmade Vodka and orange juice and trying to recover – from what I shall discuss in a later post.

Let me say this: no matter who you are, you should always keep an eye on your drinks when out on the town, you never know when some psychopath will slip something into your glass.

The last time I was in the Pacific Northwest with my father we were in Seattle visiting my sister and brother-in-law.

He had business in Portland, and I tagged along with him. We would drive south to Portland, stay overnight, then visit wineries the next day. At the end of the day I would pick up the Coast Starlight headed southbound (Train Number 11) in Salem and return home.

Our grand scheme hit its first snag after leaving Seattle proper when we drove past King County Airport.

The airframe had not yet entered service, plagued by a series of setbacks. Later, it would continue to suffer setbacks. (An engineer friend with inside knowledge of the debacle told me, in confidence, "this is what happens when the bean counters and sales people dictate specs to engineers.")

"Do you want to take a closer look?"

As a child my father collected model trains, sometimes building them from kits. He also built model airplanes and some cars, many of which were on proud display at his childhood home in Akron.

Dad is a tinkerer. My first radio was one that he had built as a school project – a mono AM/FM receiver that he soldered with his own hands and installed in a stained wooden cabinet that he also built.

As a child I learned that I could tune the radio to UHF/VHF signals and "listen" to shows I was forbidden to watch: The A-Team, Airwolf, Simon and Simon or Dallas.

When he would put me to bed, in the early 1980s, he would tune the radio to 95.5 WCLV, Cleveland's Classical Music station.

Already demonstrating a strong rebellious streak that would both serve me and get me into great trouble in the coming decades, I would change the dial to Power 108 (FM 107.9), a Cleveland FM channel that would play the nascent (and verboden by my parents) art form of hip-hop.

So it was my father's 1960s-era hand-made radio receiver that I cut my teeth on Grandmaster Flash, LL Cool J, The Sugarhill Gang et al.

Dad and I would construct models together as well, and I had a particular fascination with airplanes.

Dad bought me a Radioshack breadboard kit to build my own radio, Erector-sets, Capsula kits and – after seeing E.T. The Extra-terrestrial – a Speak & Spell. I promptly disassembled it just as Elliot had in the movie, to his consternation.

I was a tinkerer as well, and I have a good idea where the tinkering gene came from (hint: on my Y chromosome).

Fast-forward a few years and I was subsidizing my income at high school modifying Radioshack Auto-Tone-Dialers to sound off payphone coin tones (probably not my father's idea of the best use of my skills).

The point is, my dad is a bit of a nerd, and so am I (perhaps I am understating my nerdiness).

We found an access road that ran along the fence to King County Airport and proceeded to snap pictures, walk around and talk about airplanes. Just up the road was the Boeing Museum of Flight, and one of the Holy Grails of plane-spotting: the very first Boeing 747 prototype ever flown.

Dad and I rolled into Portland late, obviously, but neither my dad or I regretted a second.

The experience of exploring Boeing Field and sneaking into the Museum of Flight was a bonding experience of immeasurable value – an intangible moment between and man and his son spent in mutual wonder of the miracle of flight worth more than the biggest pile of cash or the greatest larder of gold.

The plan for the next day was to visit a series of wineries before I would be dropped off to catch the Southbound Train Number 11. Soon we would discover the folly of that plan, too.

Our first scheduled stop was a winery run by a vintner my older sister Jenny had come to know and work with named Ken Cancilla.

The Cancilla vineyard grows 39 acres of pinot noir and, that year, a single acre of chardonnay.

We wove around the backroads of the valley into the foothills of the Cascades just south and west of Hillsboro, into Gaston, Oregon.

The visit was a private one, arranged by my sister. Just my father, myself, Ken and a couple of  high school interns on an independent study program to work at the vineyard were in attendance.

We toured the hillside on which Ken grows his fruit, Ken pointing out the minutae of growing the grapes, the difficulties of harvesting and brewing wine. He brought us to a large tree stump that had been inhabited the previous year by a large colony of honey bees.

We sat on his porch and drank several samples of his wine – which was fantastic!

We discussed his background – an Intel retirée that immigrated to the PNW from the Washington, DC area. I told him about my career and my experiences with Microsoft and IBM as a full time employee and also a contractor.

The time had flown away from us.

Visiting any other wineries was going to be out of the question if I was to catch my train home, and I had to work the next day.

Our plans for the rest of the day would have to be scrapped.

Dad and I didn't regret a second of it. 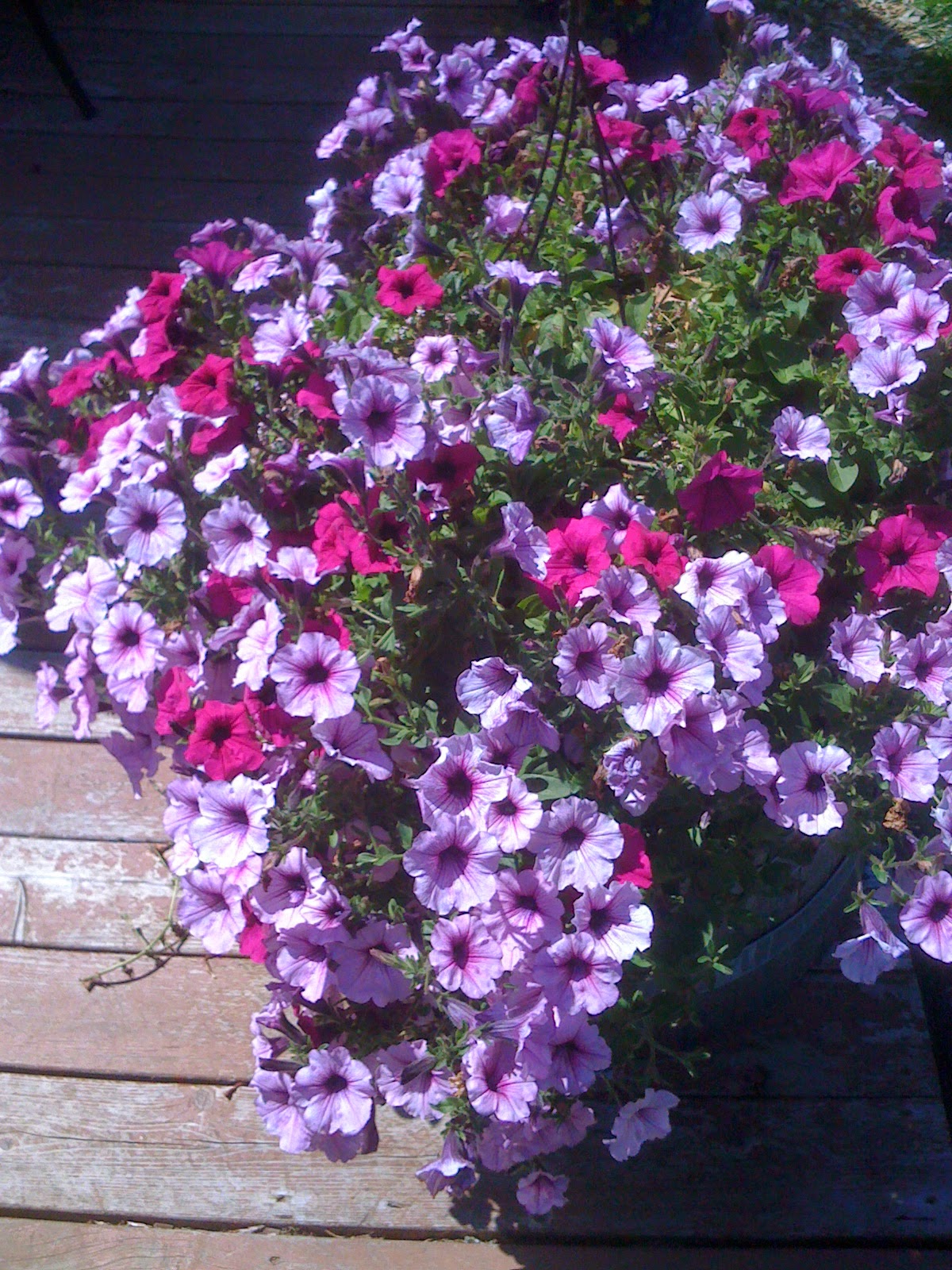 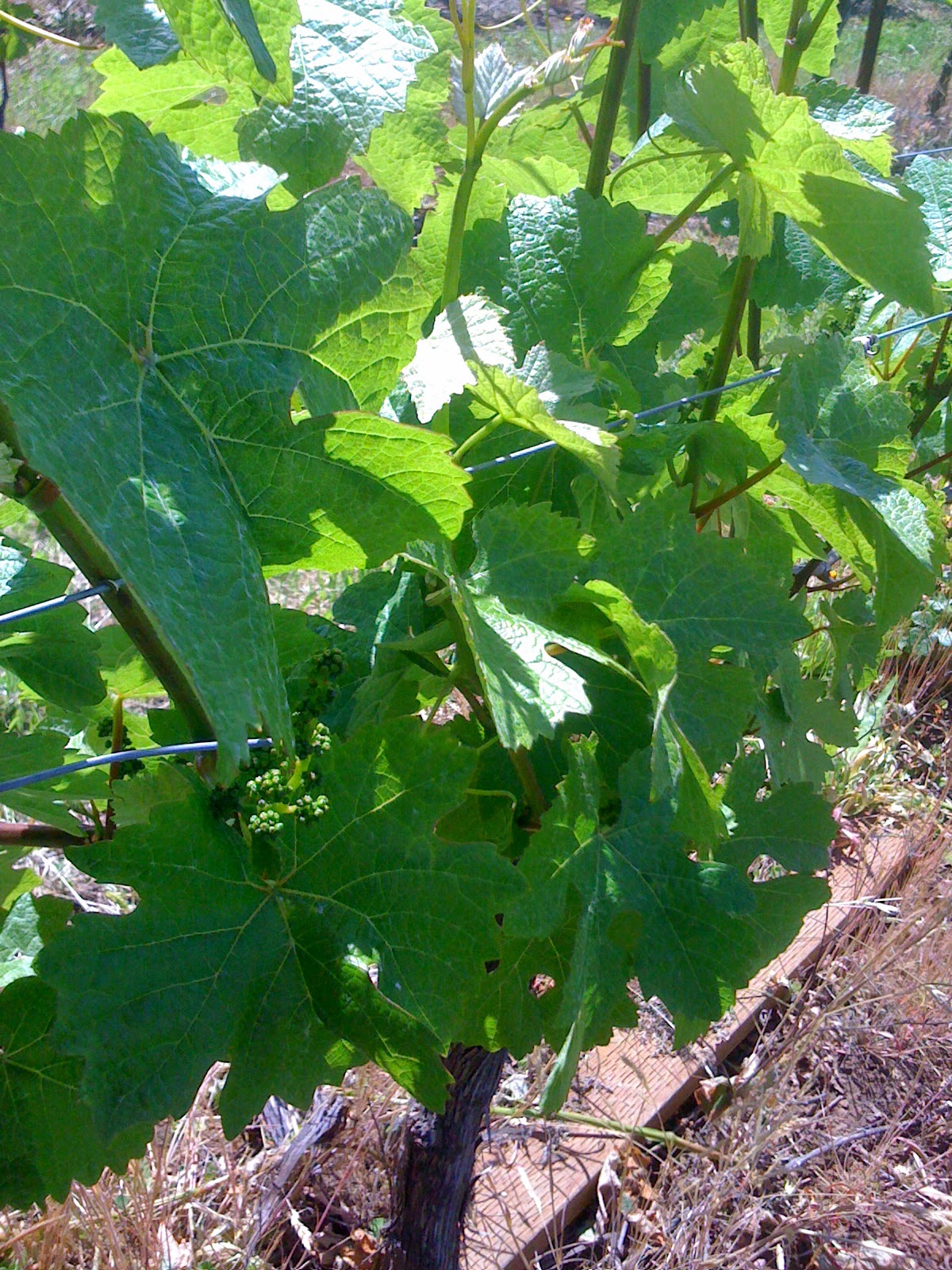 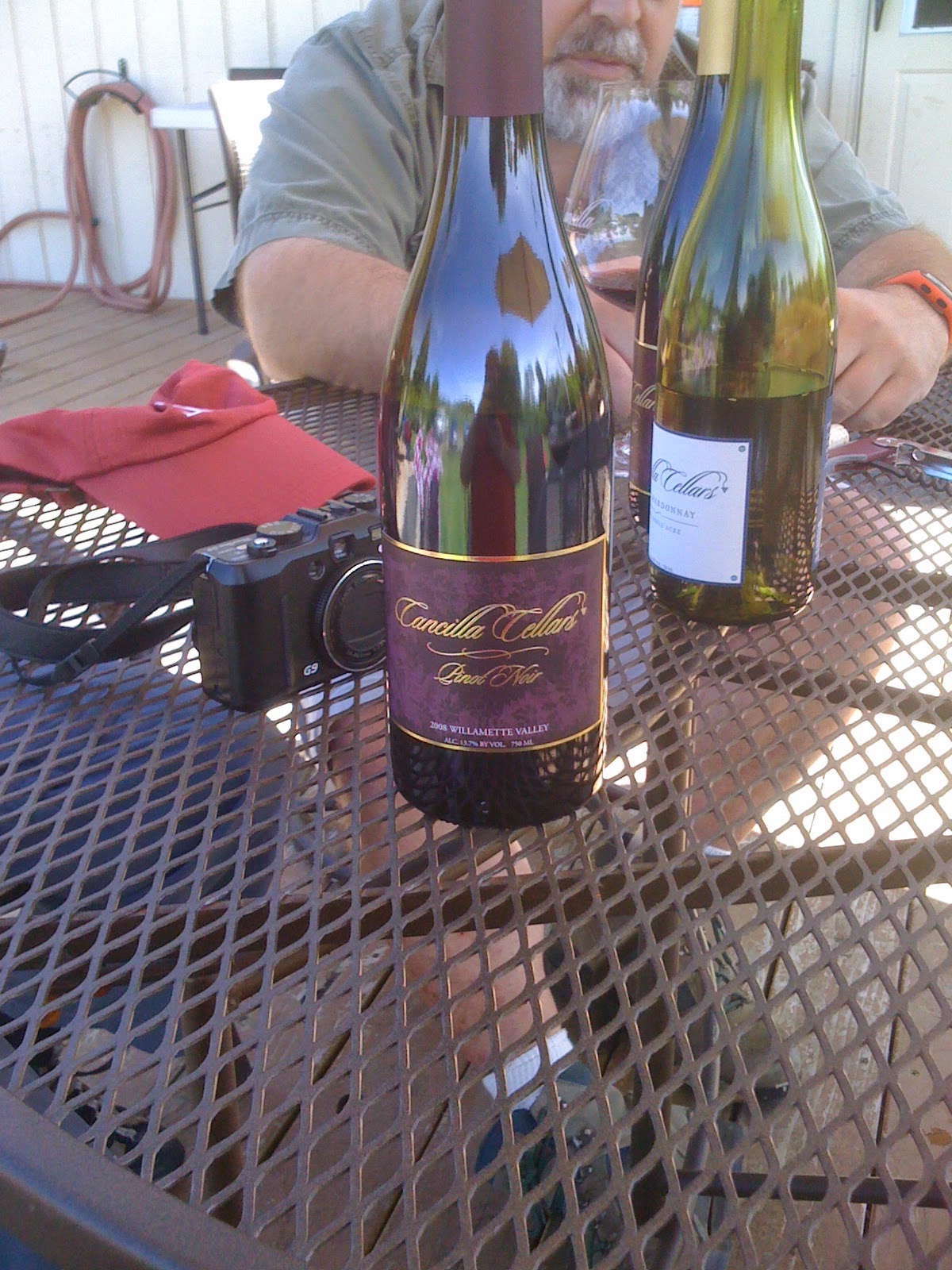 If I had made it to Willamette Valley last weekend, Cancilla's vineyard would have been the last stop.

I couldn't make it, as much as I would have liked to, and I'm angry at the anonymous stranger who ruined my plans.

The rest of the party returned that evening with ingredients bought at a grocery in the Alberta Arts District of Portland called "New Seasons."

(Non-sequitur: for some reason this makes me think of the penultimate track on The Church's album "Starfish.")

We were missing a few pantry supplies to accomplish what I wanted so I set out for New Seasons.

When I returned I assembled this salad in honor of my father's 70th birthday. 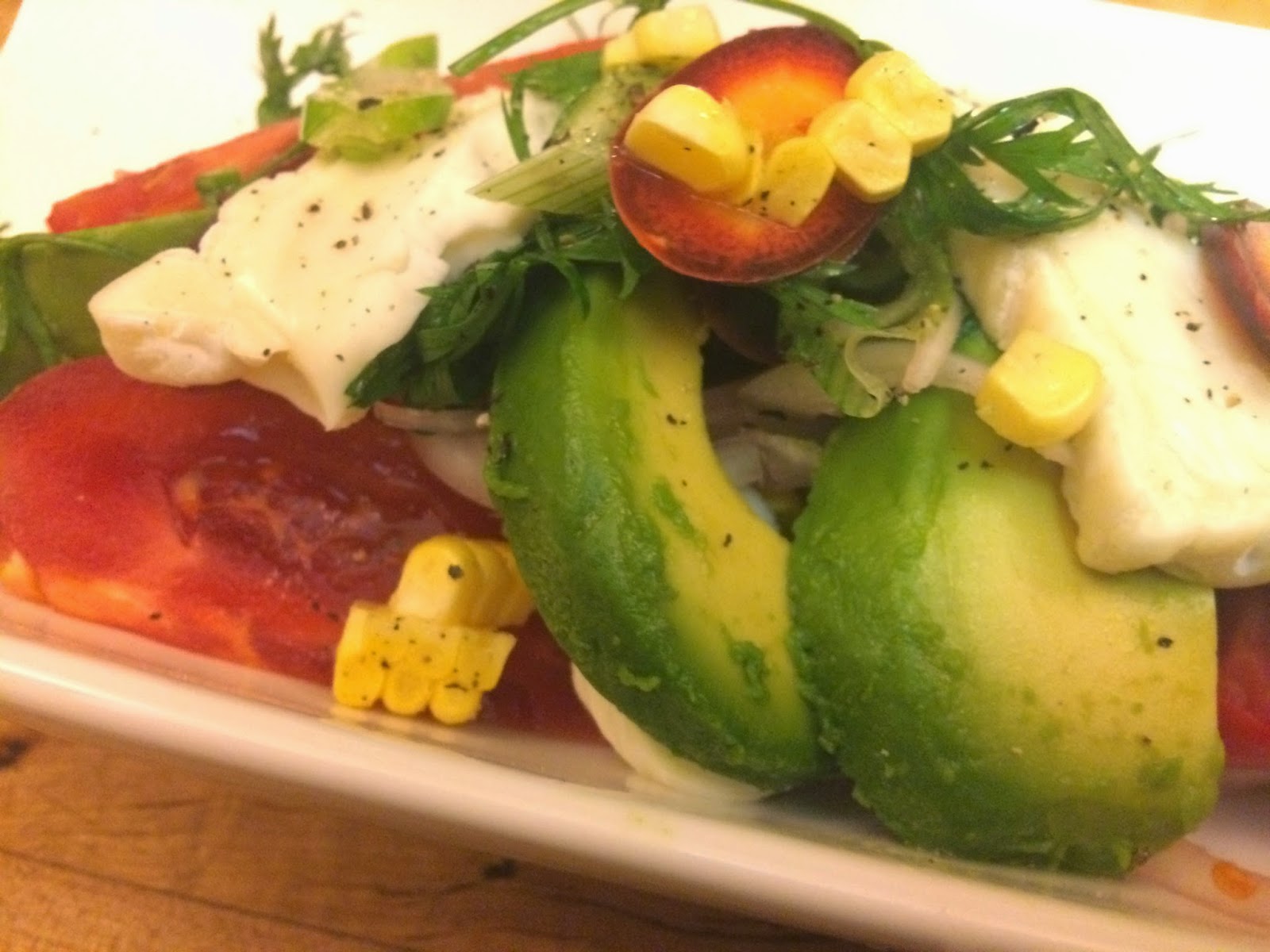 When I was just a teenager my father surprised me with a trip to a club in Cleveland Heights called Peabody's Café.

The club is long gone. The artist I went with him to see, Warren Zevon, is also sadly gone.

Dad brought me because of my interest in his album "Excitable Boy."

The album's producers are Jackson Browne and Waddy Wachtel (who was also a famous session player in the 1960s and 1970s).

I mentioned The Church earlier. I was surprised to find out that Waddy Wachtel produced their most famous album, and one of my favorite records of all time, "Starfish."

Here's "A New Season", by The Church:

This one's for you, dad: