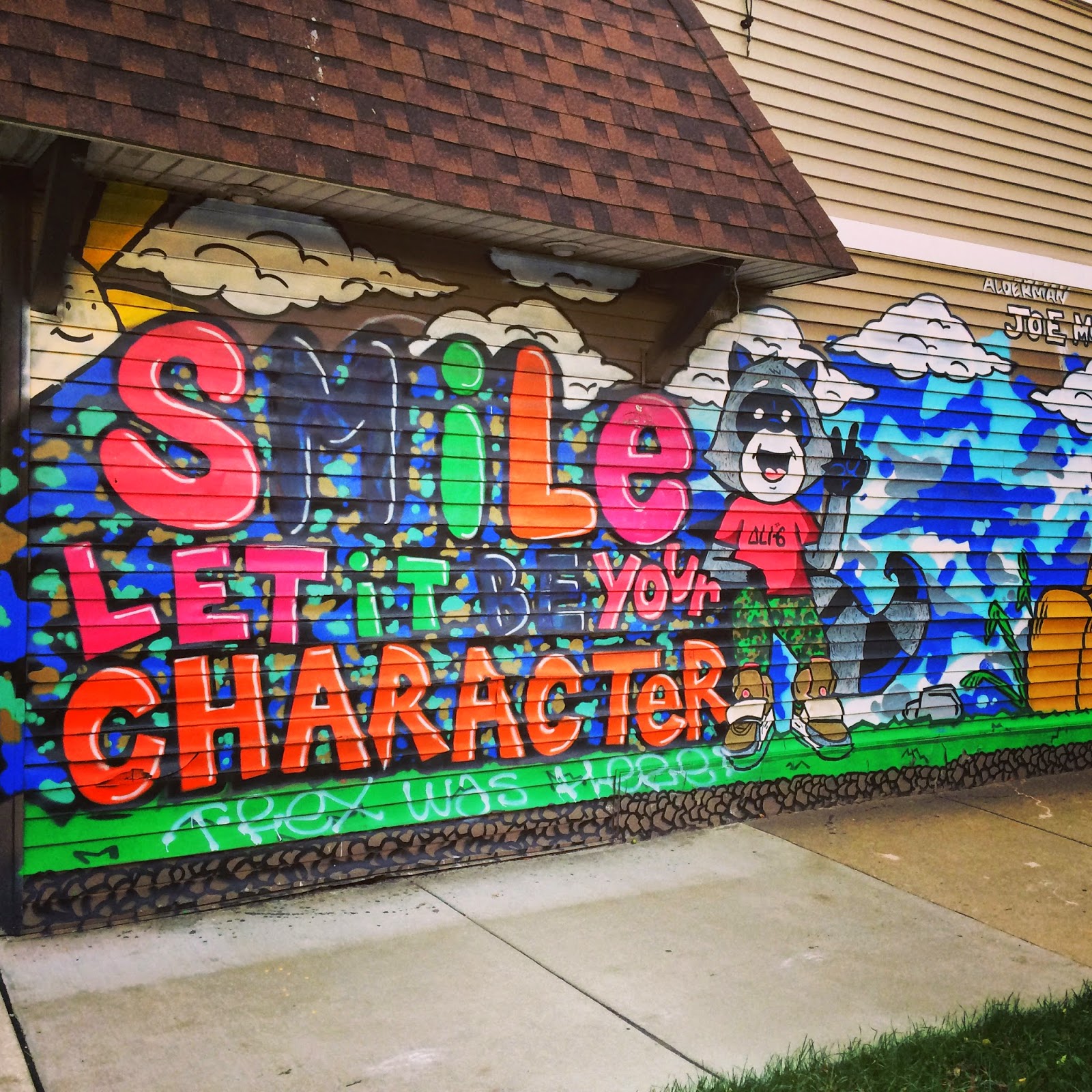 The city of big shoulders. The second city.

Cleveland's river was on fire? Bah. Chicago itself was on fire. City of the Bulls, the Bears, the Cubs and the White Sox.

It's easy to loathe Chicago if you grew up in Cleveland – I have felt pangs of jealousy whenever Chicago is spoken of in hushed tones of reverence, when it is flashed on television screens all glass and steel, when it announces its presence like an uninvited guest "hey fucko, I'm Chicago who the fuck are you?"

Broad shoulders, brass balls. A rust belt city that somehow dodged the bullets that struck at the hearts of Gary, Milwaukee, Saint Louis, Buffalo, Youngstown, Pittsburgh and Cleveland. Some cities were struck more than once.

Chicago, a former cow town that came to be the hub of the meat industry in the 19th century. Chicago, a city so corrupt Washington, DC deigns to mock it. The city in whose meat packing district Upton Sinclair toiled to expose the dirty secrets of how the sausages are made, lighting a match under Congress to enact tougher food safety laws and eventually create what we now know as the Food and Drug Administration.

It's easy to want to put Chicago in it's place, but the city truly is a marvel and is every bit as much the all-American town that people in hushed and reverent tones speak of, so I shall hear my better angels and I will build-up and not tear-down: on this day I do declare that I kind of like Chicago! 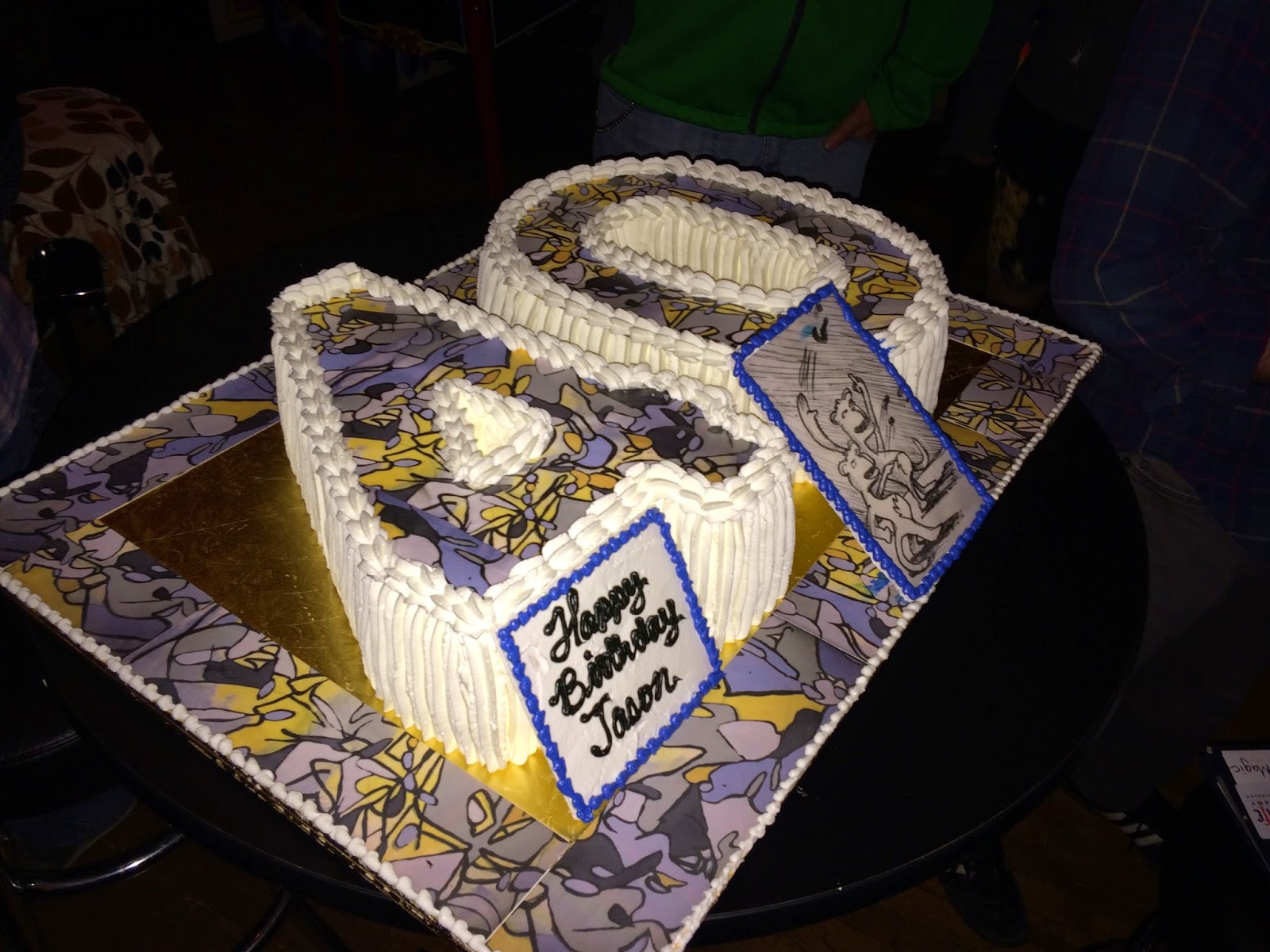 After coming back from Cleveland early this month, after travelling 5 out of the previous 7 weeks, my body ached, my feet and ankles swollen and riddled with gout, struggling to walk up a steep hill I realized that I had lost track of my physical fitness and decided that I would become a vegetarian(*) for the rest of the year.

To that end I have had some success, and some failure.

I am eating more vegetables, I've dodged temptations like delivery pizza and Chinese food, soda and junk food (with some exceptions):

I had to buy some meat to finish the Hannibal Lecter entry, so, waste not want not; I had a pizza one particularly hung over day, cooped up at home (Zante's, which does a terrific Indian pizza on naan-based curry flavored dough, delicious but terribly, terribly slow service); Kathy, the owner of the Grog Shop visited and I absent-mindedly ordered a double cheeseburger from Red's Java House on the Embarcadero because that's what you do at Red's Java House; I put a healthy amount of bacon in a large batch of kidney beans I made for myself and my roommate; I will slice off a few small pieces of soppressata I was given last time I visited Drewes Brothers Meats and I am currently curing a tri-tip in coffee grounds and salt which I will either air-dry and eat raw or smoke in the near future.

To add injury to that insult, I knew that all bets would be off when I recently visited the City of Big Shoulders earlier this month to celebrate my pal Jex's birthday in an elaborate surprise that his girlfriend had spent months planning (co-conspirators myself and Jex's sister – the surprise was spoiled at the last minute by a mutual friend who had the dates mixed up).

Nevertheless, it was a great way to bring Jex into his 5th decade on this earth. 40 years... my temple furrows with that number looming in my own calendar.

The night before I was scheduled to return to San Francisco I wanted to take Jex out somewhere special. Just about everyone I knew who knew I was in Chicago told me the same thing, in (somewhat frightening) unison: you have to go to Longman and Eagle.

Longman and Eagle it was... and I made a hasty late night reservation for four (my old roommate Smarty, wiped out from the train ride from Cleveland to Chicago, slept through dinner – leaving me, Jex and his girl) at 11:30PM on a Saturday night. 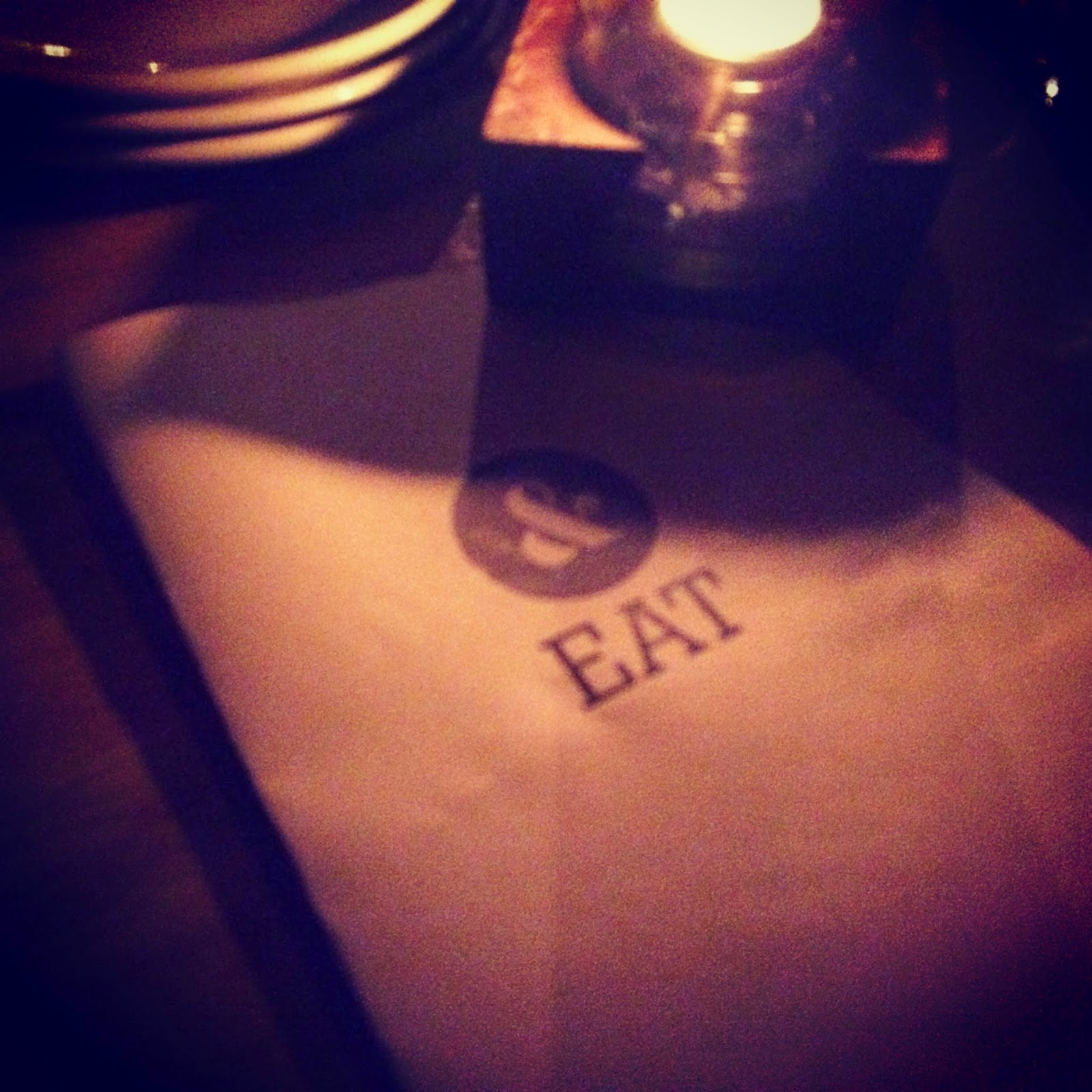 Touted on Google Places as an expensive restaurant ("$$$$" out of 4), I donned a button down that was reasonably clean and hoped I wouldn't appear too dressed down going into the dinner blind.

I had scanned the menu and saw a few things I knew I'd like (and my joints, feet especially, wouldn't): sweet breads, bone marrow, steak, foie gras.

I walked to the O'Hare Blue Line stop and made my way on the CTA to Logan Square, Longman and Eagle just a short walk from the station.

Expecting to see a fine dining establishment with a coifed maitre'd and starched servers I instead found a bearded man in skinny jeans (I won't use the "h" word) and a noisy bar full of revelers. I scanned the room, there may have even been stickers adorning the walls behind the bar serving local brews on tap plus a dazzling array of liquors, mostly whiskey.

Jex and his lady showed up and the bearded man at the host stand went to seat us in the main room, however Jex's girlfriend asked if we could be seated in the dining section, a room adjacent to the bar but not quite as noisy (although still fashionably quite dark).

Our waitress arrived to explain the menu and take our drink orders. Think 1990s "Manic Pixie Dream Girl" updated for the aughts with the appropriate hair, tattoos and makeup and you'll about have the right look. I swooned.

As dinner trickled out of the kitchen, first as small shared plates, then more formal (mini-entrée) appetizers and finally a shared entrée of pork loin, I found myself swooning over more than the waitress. 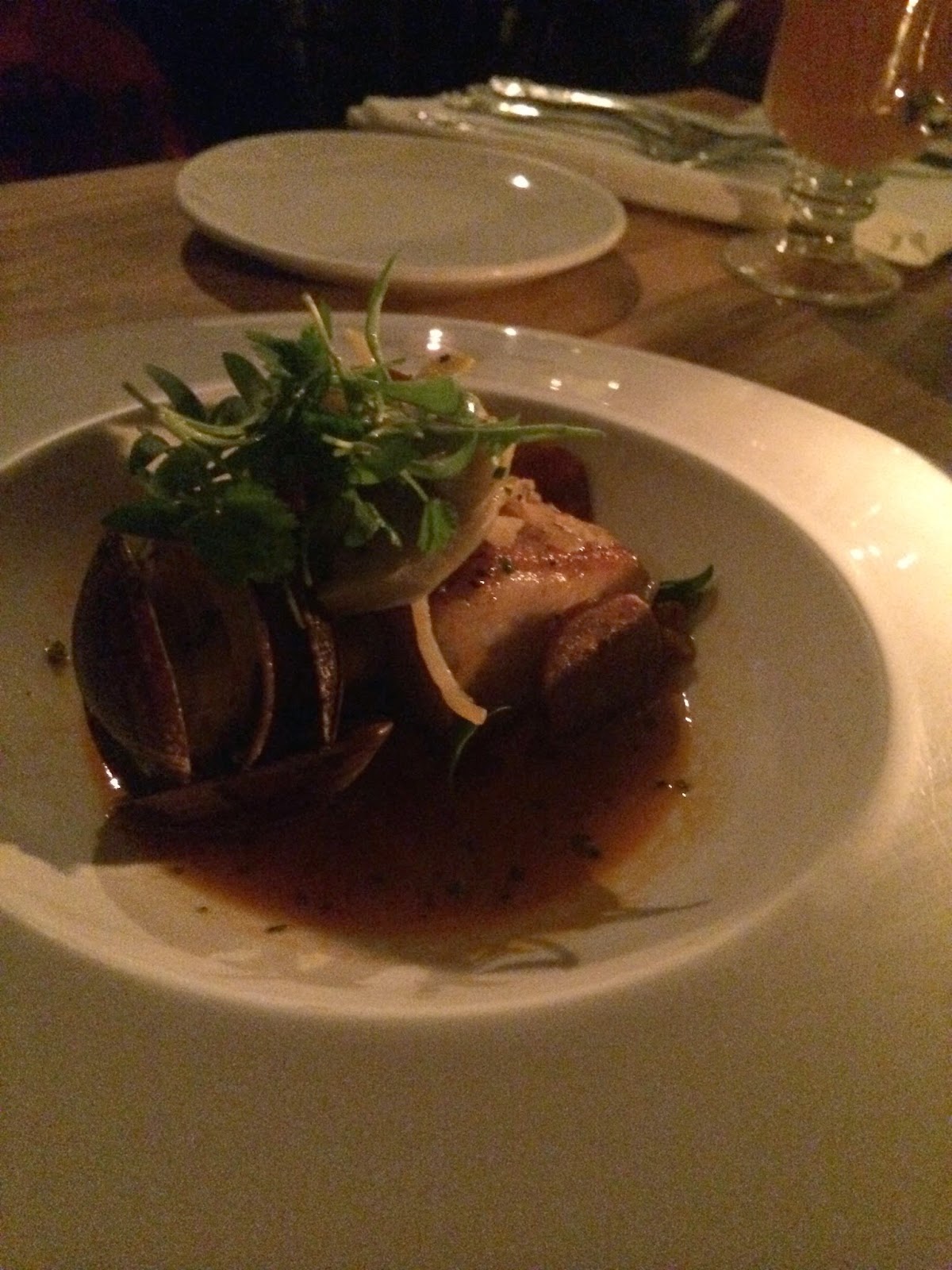 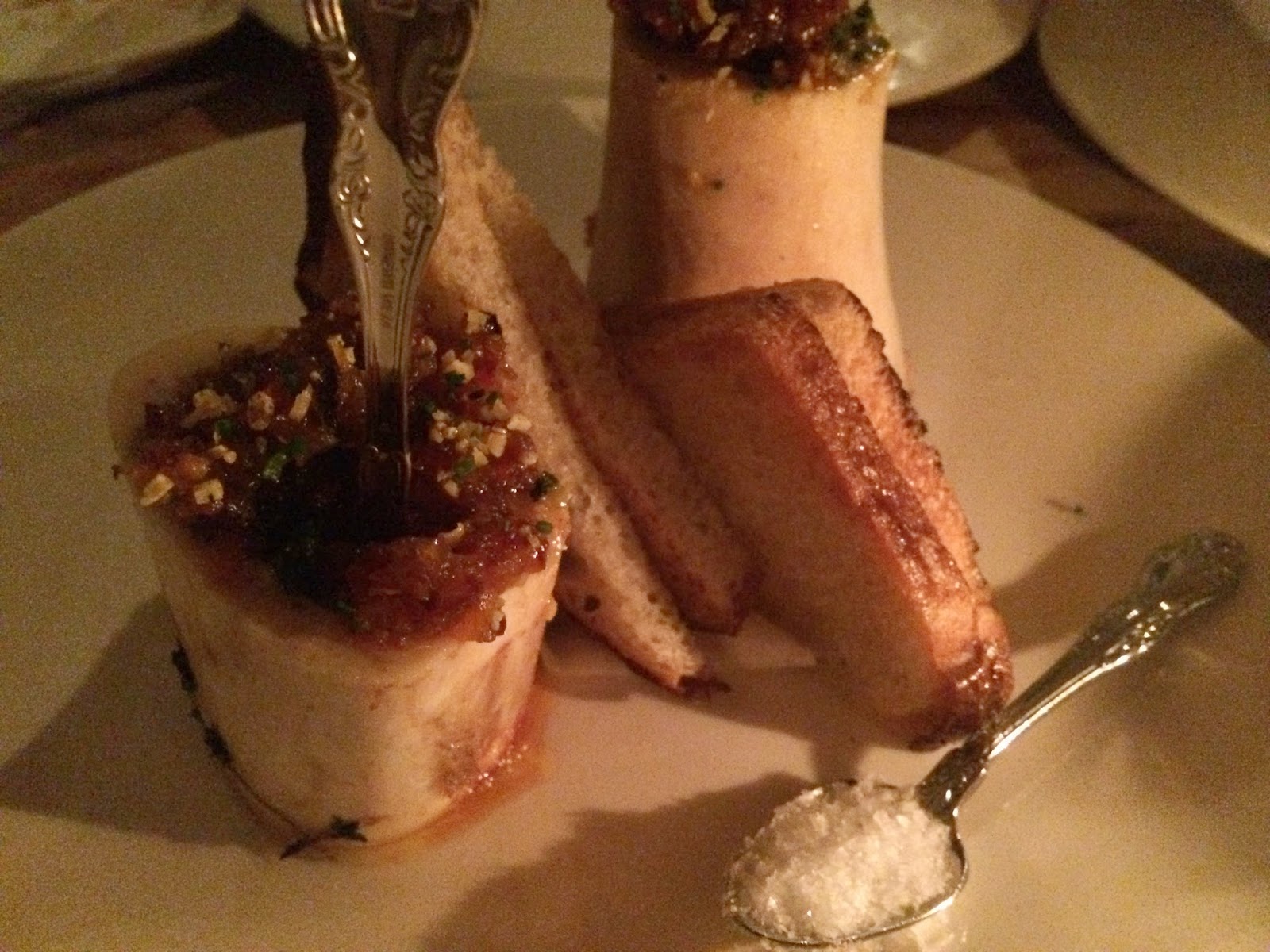 As seemingly decadent as everything was, it occurred to me that Longman and Eagle subtly adapts a silent trend in contemporary American casual cuisine that eschews large portions of starches and replaces those with a better balance of thoughtfully prepared vegetables and the protein. This of course is a dismissal of the stodgy meat-veg-starch formula of the classic steak and martini joint. While pretzels and Welsh rarebit are not health food, we aren't piling on an additional bread course ("The Sucker Course"), pasta, rice, potato or some other heavy white starch. Where a sprig of curly parsley would suffice in bygone times, rich food's accoutrement here are composed little salads of herbs or apples or radishes, lightly dressed and intended to be consumed not tossed aside and eventually disposed of.

To my thinking this has two immediate benefits: first, to the diner, you do not feel gross after eating what is arguably decadent food. Second, to the establishment, guests that are not in discomfort if not pain at the end of a lengthy multi-course meal are more likely to order another beer, perhaps dessert.

Dessert, by the way, was on order (our waitress did not have a hard time convincing us, especially me). I asked what her favorite was and she said "oh you have to have the Fernet milkshake." Fernet? Milkshake? I like all of those things. The dessert did not disappoint.

All told, the meal was not too expensive (just around $200 for three for several small plates, a couple of appetizers, a split entrée, several drinks and dessert).

A note about the music: throughout the meal I enjoyed perhaps the most schizophrenic Pandora radio station ever, spanning Nas to Elliott Smith, but I particularly enjoyed it whenever a steaming pile of meat would appear in front of us and either The Smiths or Morrissey would pipe out of the house speakers.

Whether or not you or I personally agree that "Meat is Murder" there are definitely compelling reasons to reduce your intake of meat in your diet – not strictly for health but for economic and political reasons. So Morrissey may be an insufferable gasbag (who revels in his own sanctimony), but his position is not entirely without merit.

For myself, staring down the barrel of 40 years old, I've learned that if I treat my body like an asshole it will be an asshole back in the form of soul-crushing hangovers, prolonged infections, uric acid cysts in my joints, aches and pains.

So back on the meat wagon I go, and as I write this my hair is air-drying after I went to the gym, spent some time on the stationary and then treated myself to a dip in the hot tub.

* Ovo-lacto. Not including Thanksgiving or Christmas. Or whenever the urge overtakes me. But, you know, mostly vegetarian.

I'm starting a new thing: every time I make it to the gym I'm posting a "selfie" on Selfie.com (available on iTunes). Anyone can follow my progress by joining Selfie (it's free) and following me, DottoreGus.