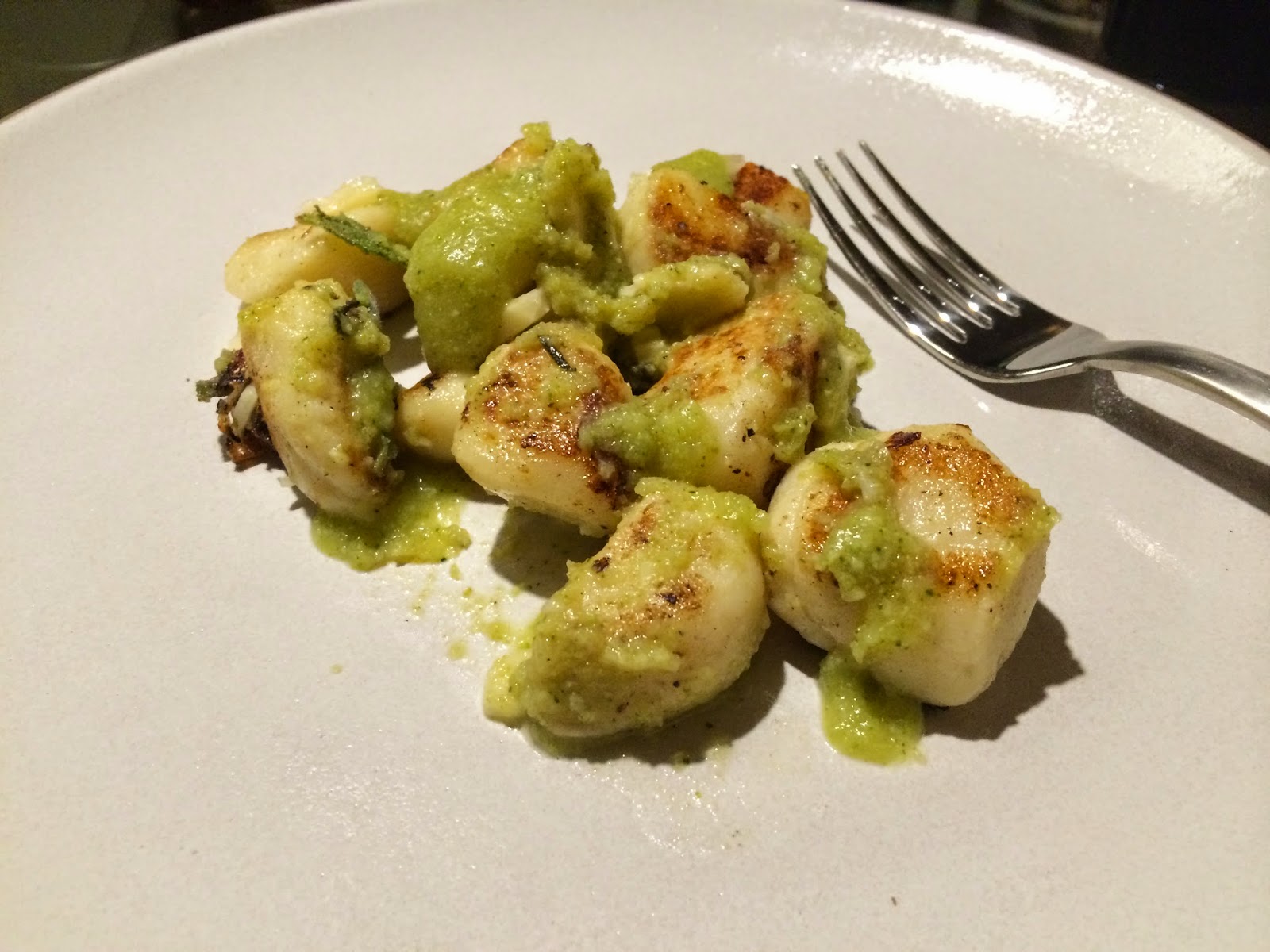 The conversation played out something like this on private Facebook cooking group of which both I and Dr. Adam J. O'Donnell (PhD) are members:

AJO: I have a bunch of broccoli soup, I think I'm going to make gnocchi.
Me: That sounds good can I invite myself?
AJO: I wouldn't have mentioned it (semi-)publicly if I didn't want you to invite yourself!
Me: Swell, I'll be over Thursday night.

Me and my platonic date set out for Adam's by way of I-280, his base of operations, home and home office located in the hills of the Glen Park neighborhood of San Francisco overlooking the bay.

"The cool this about this house is that I can see arrivals and departures from from Oakland and SFO," remarked Adam appealing to my shared interest in planes spotting.

"That's probably the last heavy of the night headed westbound over the Pacific," I mentioned, as wide-body turbojet lumbered northbound over San Bruno mountain and turned west to head out over the golden gate.

It was now dusk and airframes disappeared against the slate blue-grey of the evening sky, leaving only fait outlines. Was that an Airbus A340? A Boeing 777? Perhaps even the king of jumbo-jets, the majestic Boeing 747... I couldn't get enough of a glimpse of the profile to see if the plane had the 747's distinctive forward double-decker "hump."

We were outside plane spotting because it was a swamp in Adam's kitchen: pots of boiling water, oven on roast, soup heating on the stovetop. Even with the screen door open to Adam's back yard the room was a steam bath.


Work the 250 grams of the flour gently into the riced potato just enough so that it holds together as a mound.

Create a divot as shown below for the eggs (the "volcano method") and mix, working in additional flour to control the stickiness of the dough.

Form a cohesive log and section off portions of dough the size of a softball and roll out until a rod of dough that is uniform to about 1" in diameter is formed, using extra flour as needed.

Cut into 1" pieces, dust and set aside on a cookie sheet with wax or parchment paper.

Use about 12-15 pieces per person if you are serving this as your entrée, freeze the rest (freeze on the cookie sheet then transfer into plastic lidded containers).


Place the broccoli stems and cauliflower in a pot and add water to cover. Place lid on pot and bring to the boil.

Once boiling, remove lid and add florets, salt and pepper.

Taste for seasoning and remove from heat. Replace lid and allow florets to "cook" using residual heat for about 10 minutes.

Remove lid, add zest of about half a lemon and then blend the mixture with a stick blender.

Adam had over-seasoned a prior batch of broccoli soup, so we agreed that we could "water it down" by adding more broccoli.

Adam had read somewhere that if you slice a raw potato into whatever sauce you are trying to desalinate the potato will absorb the additional salt.

We gave it a try and it worked brilliantly. I suggested to Adam that he take the potatoes and turn them into fries.

To prepare the gnocchi, bring a pot of heavily salted water to the boil. Heat a large sautée pan on another burner.

Harold McGee suggests only using as much water as is needed to be absorbed by the noodle to cook pasta, but gnocchi is really more of a dumpling than a noodle and it's structure would not hold up using McGee's method (not to mention the starchy mess that it would create in your frying pan, and so on).

Working in batches of 12-15 gnocchi at a time, boil until the noodle floats and using a spider type strainer, remove to a work plate. Drain off the excess water.

Remove your sautée pan from heat, add 2 or 3 teaspoons of ghee or butter and some freshly chopped sage. Cover the entire bottom of the pan with butter and introduce your cooked, drained gnocchi into the pan. Return the pan to the stove and sautée the noodle (dumpling) until nice and golden.

To plate family style, reduce the broccoli soup slightly in the sautée pan then cover the bottom of a large plate. Arrange fried gnocchi on top of broccoli purée. Garnish with fresh thyme and pecorino cheese. 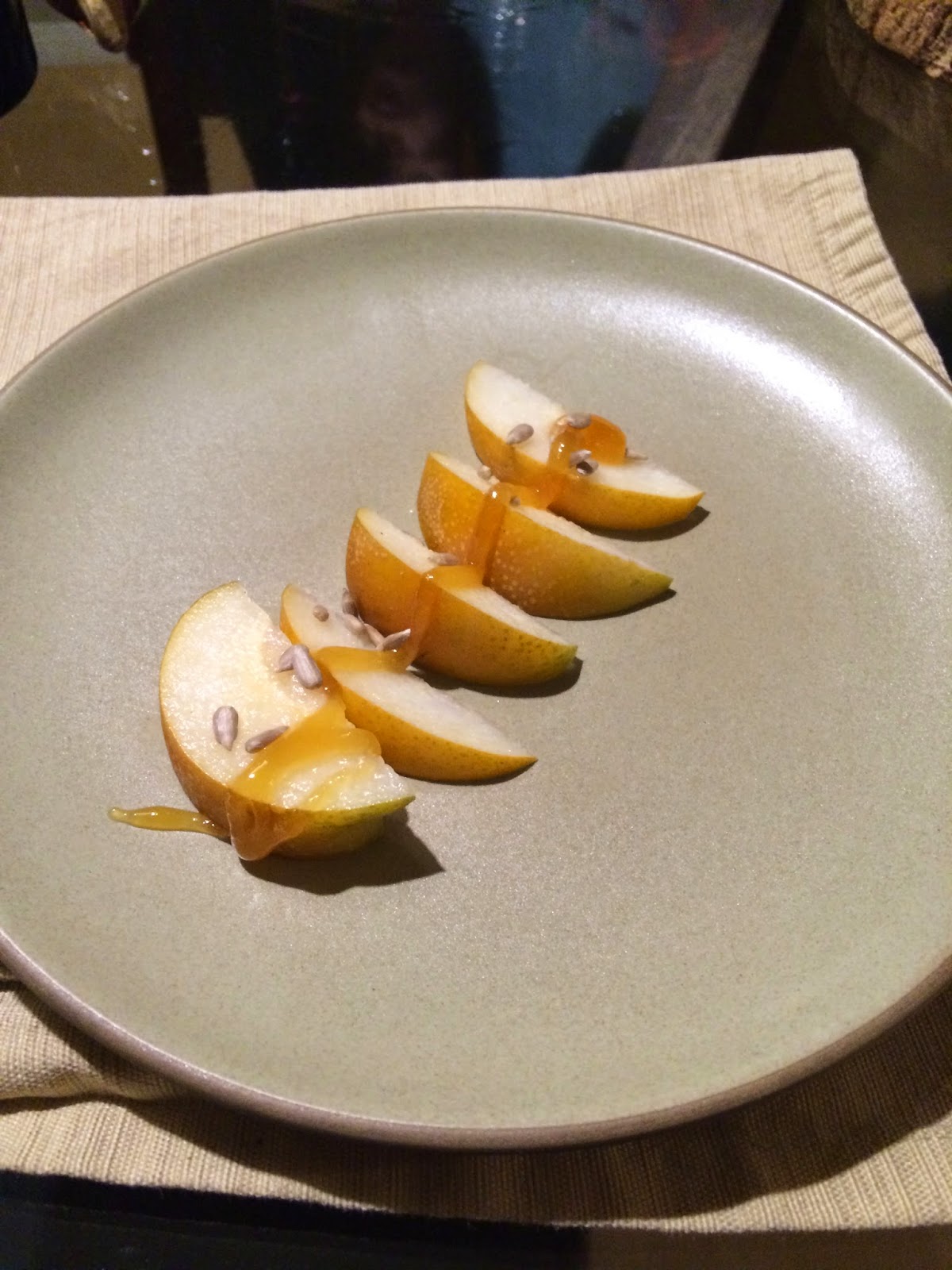 As we cooked dinner, we had the NLCS blasting on iTunes radio.

By the time the dumplings were hitting the water, the Giants had clinched the National League pennant.

We took a brief moment to stand out on the patio again and listen to the sounds of fireworks, cheering, car horns and gunfire coming from the valley below us.

I guess I was wrong about our October chances, having spent weeks teetering on the edge of viability in the post-season.

Now we were going back to the World Series for the 3rd time in six years.

Here's some Fuji apples with honey and sunflower seeds for a sweet post-season.