Such a deal on allegedly wild caught allegedly mahi at Costco right now. It must be fish taco time again. Having done un-battered tacos lately I decided that batter was better this time out. I prepared the filets in my go-to panko and ground pork rinds coating (following the four and egg, of course). Some garlic slices found their way onto the tops of the breaded filets.

I served the tacos with green beans, fresh tomatoes, rice, and butternut squash mashers with ginger. 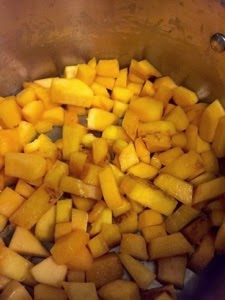 So, I Googled a cure for my blasé and made mashed potato-like squash that I'd found on my favorite ex-con's site*. The thing is, I had a lot going on for that meal and I didn't have time to really play with the butternut mashers. In the end I tasted them and ... dang ... they really needed ginger, which wasn't in the recipe and I'd also forgotten to pick up at the store. The squash mashers (squashmash?) was .... okay ... but it would have been so much better with some ginger. So, I stuck them in the fridge and got myself to South Coast Farms for a bit of the old organic and served them with today's featured fish tacos.

Here's the recipe from Martha's site plus ginger tweak.


The other day I bought a kabocha and I'm looking forward to some time to play with it. Have I mentioned that I love squash?