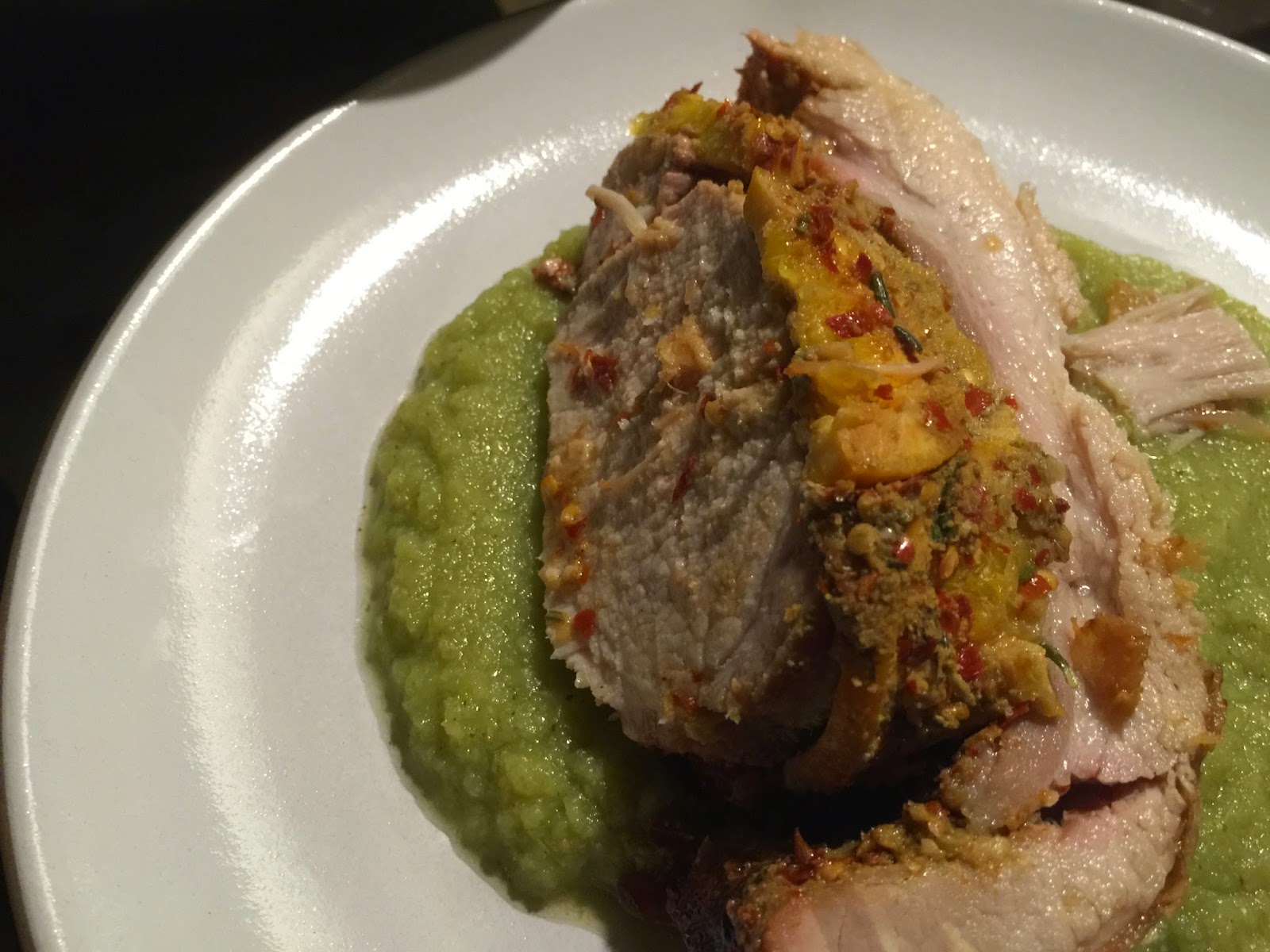 "So, were you there when the wall came down?" Adam O'Donnell asked our dinner guest MT.

"Yes, and let me say this: you would have had to have been the ugliest person in the world if you didn't manage to get laid during that time. Everything was a free-for-all. It was great."

MT, who split time between schooling in San Francisco and his native Germany, is definitely an international gentleman of leisure.

Leisurely was the pace of conversation over a few glasses of petit Syrah (which is neither "petit" nor a "syrah" as one of my wine friends once quipped to me years ago) and a pork roast prepared by the good doctor.

Porchetta is a preparation that is most closely associated with Ariccia (in the Province of Rome) in particular and Lazio in general. Porchetta is one of the region's two most famous food items, the other being Pecorino Romano – Rome's sweet, salty, grassy, nutty sheep's cheese.

The roast was like a silent fifth guest at the table, prodding a roiling discussing that spanned tragedy, memories of growing up in steel towns (our guest from Germany, our host from Philly and myself from Cleveland), tales of dating woes, bad jokes, corny jokes and dirty jokes ("Say, do you know the difference between jam and jelly?..."). 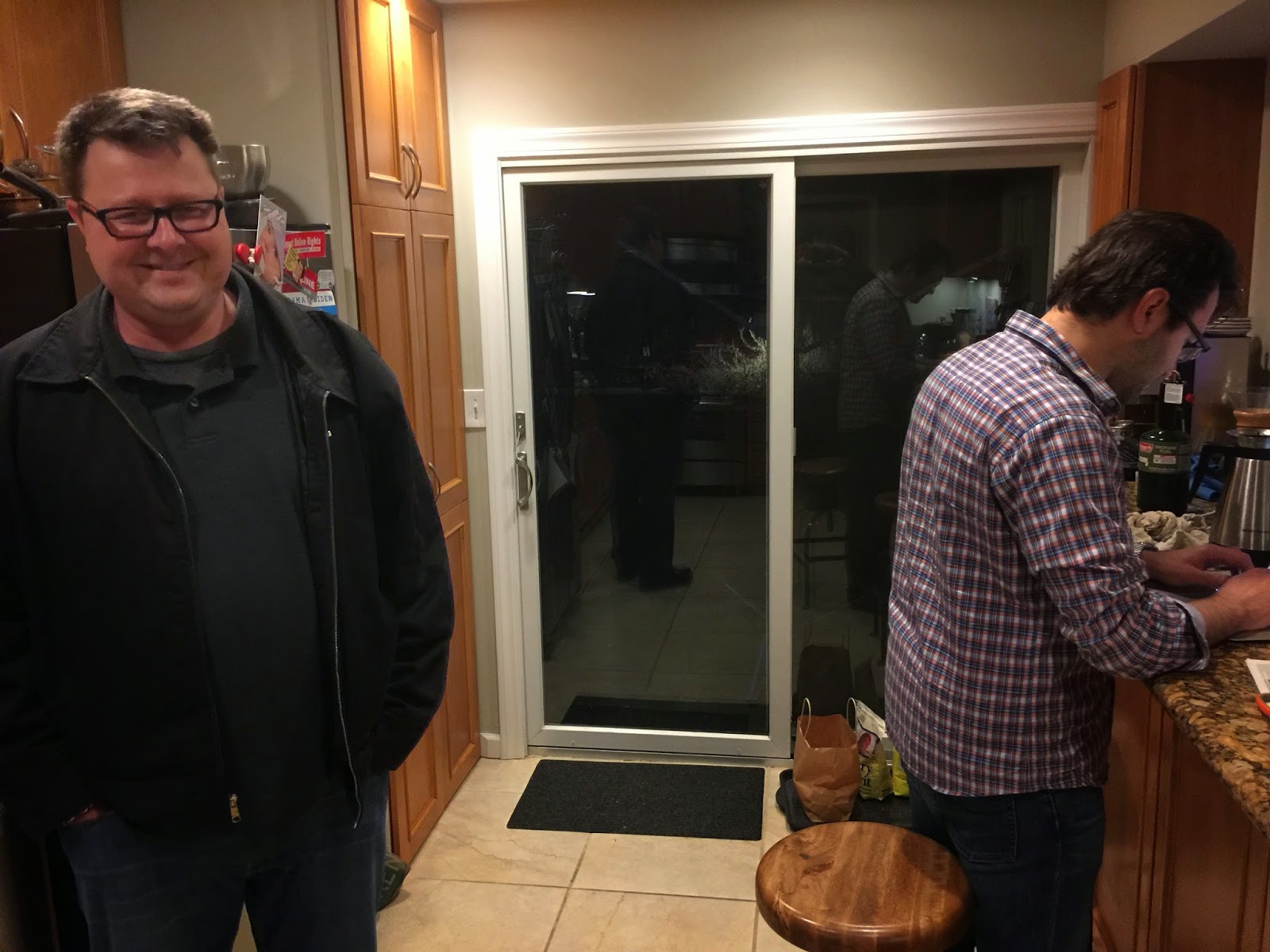 For a thin instant I found myself feeling a tinge of guilt when, after dinner, we pulled all of our gizmos out of our pockets to swap photos and video – data invisibly sublimating into the air then reappearing several feet away in a blink of an eye. Had technology encroached in dinner, or did it merely complement it?

In truth technology has its role, and it, like the pork roast, was a silent accomplice in bringing our dinner party together and the discussion that spanned decades, geography, good and bad taste in anecdotes.

On the way home, watching the city lights undulate in the valleys below the freeways connecting hilltops of San Francisco I thought about the 22 year old version of myself stepping off the train at Pennsylvania Street, the station not much more than a ditch that ran through tent cities, along side houseboats and abandoned warehouses (save for a smattering of ravers and outsider art fabricators). 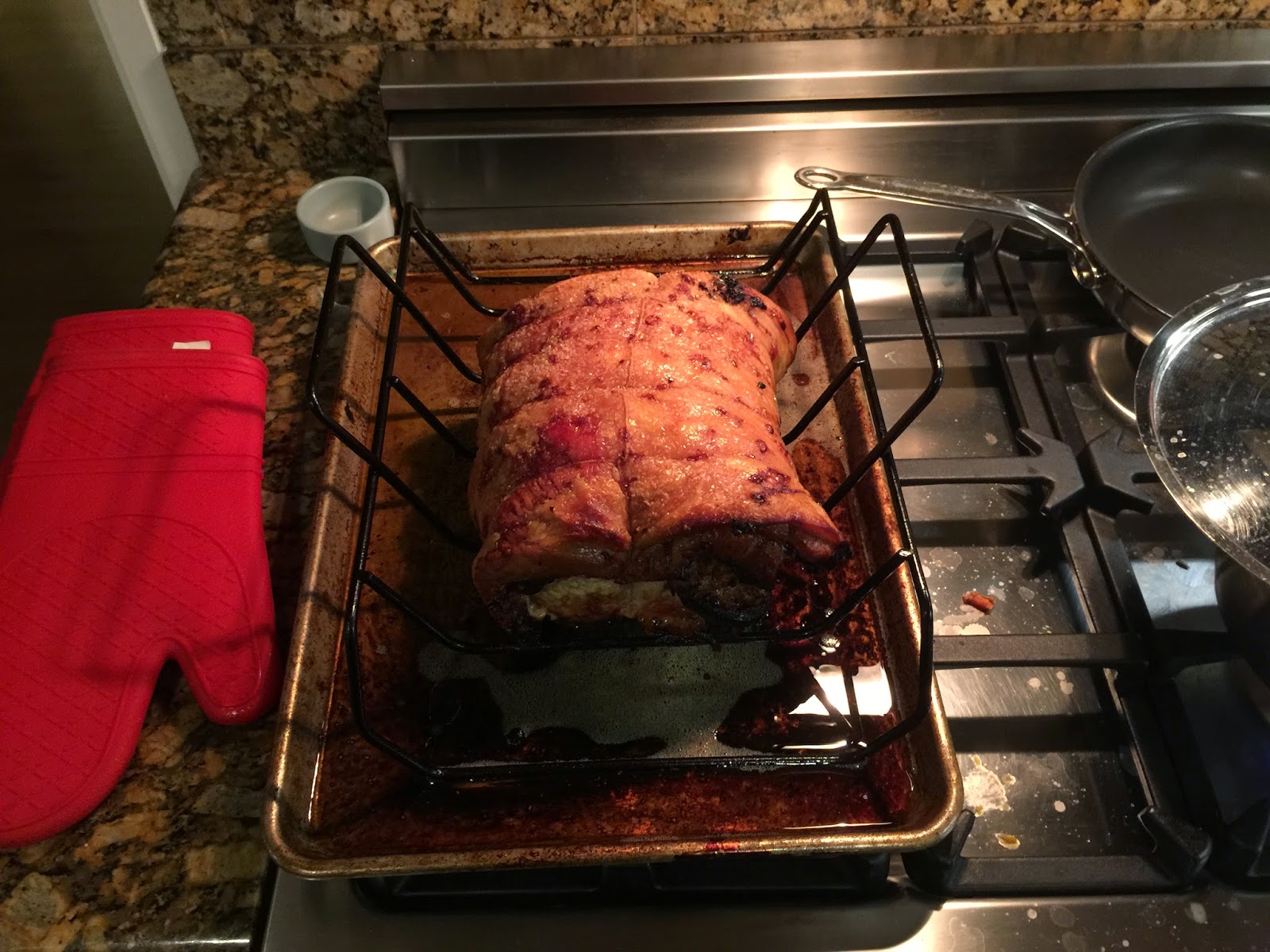 All I had with me was a box of second and third-hand computer gear which when properly assembled made a functioning workstation, a duffel bag full of clothes, my trench coat and a pair of army boots.

I would take all my worldly possessions and hoist them up two flights of stairs where I loaded them into a beige 1979 Volvo named Diane driven by a kid with blue hair who called himself Panic.

Although tonight's dinner and that moment in time, late summer 1997, are separated by many years the throughline was the kinds of community dinners, over lots of wine of course, that had always been part of geek culture social life in San Francisco.

Food is memory and communication. 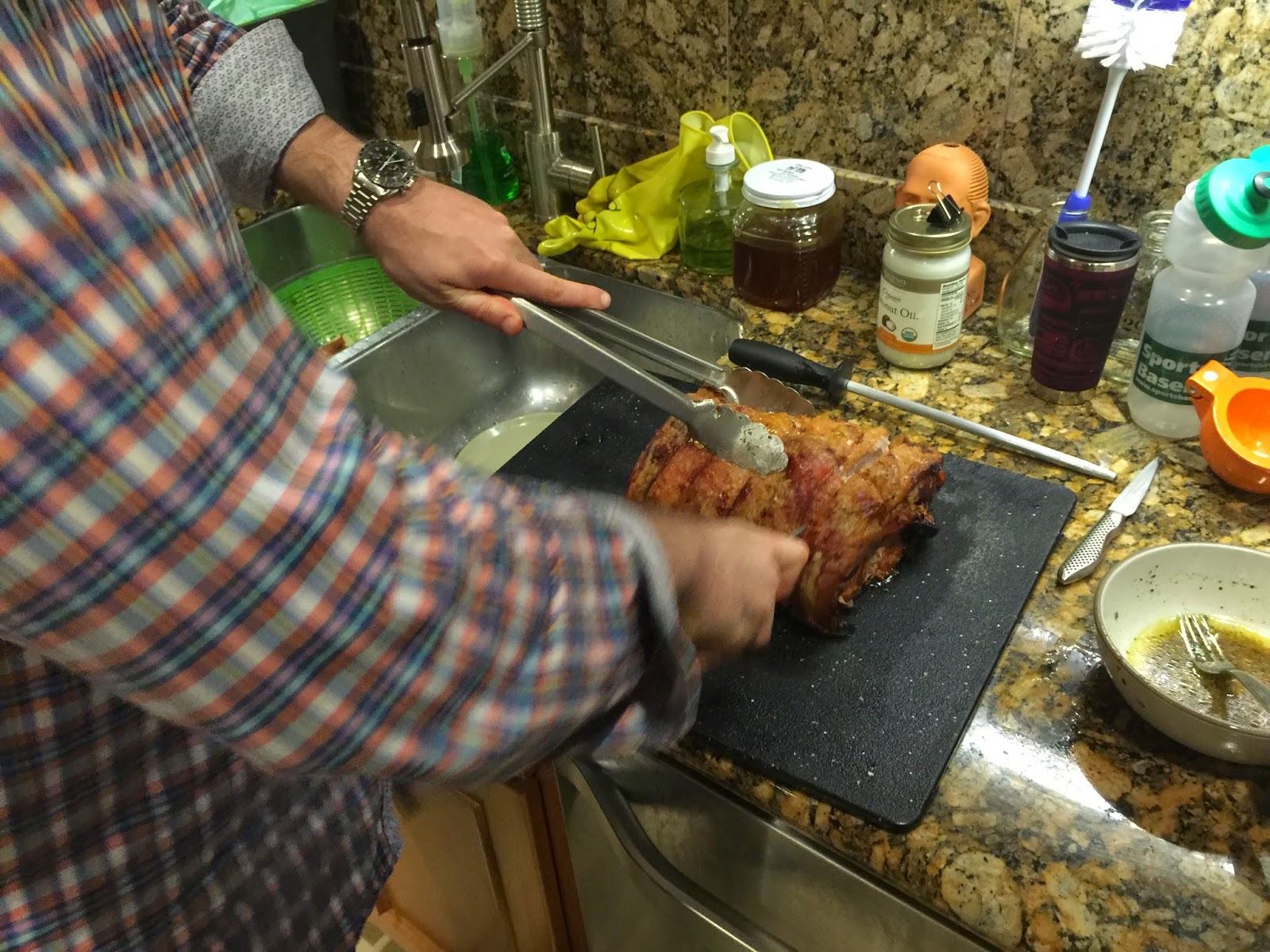 "So we went to our favorite pig purveyor, Drewes, and I told them I wanted to do a porchetta, and the guy said 'I've been getting a lot of requests for that...'"

You can listen here to me and Adam O'Donnell discussing the preparation technique, which I will try to transcribe as faithfully as possible in the recipe below.

Porchetta (adapted from Bon Appétit):
Lay belly skin side down and score the fat on the opposite side about 1/2 inch deep in a 1" by 1" diamond pattern, then turn belly skin-side up and perforate skin with a paring knife at 1/2" intervals just enough to break the surface of the skin. 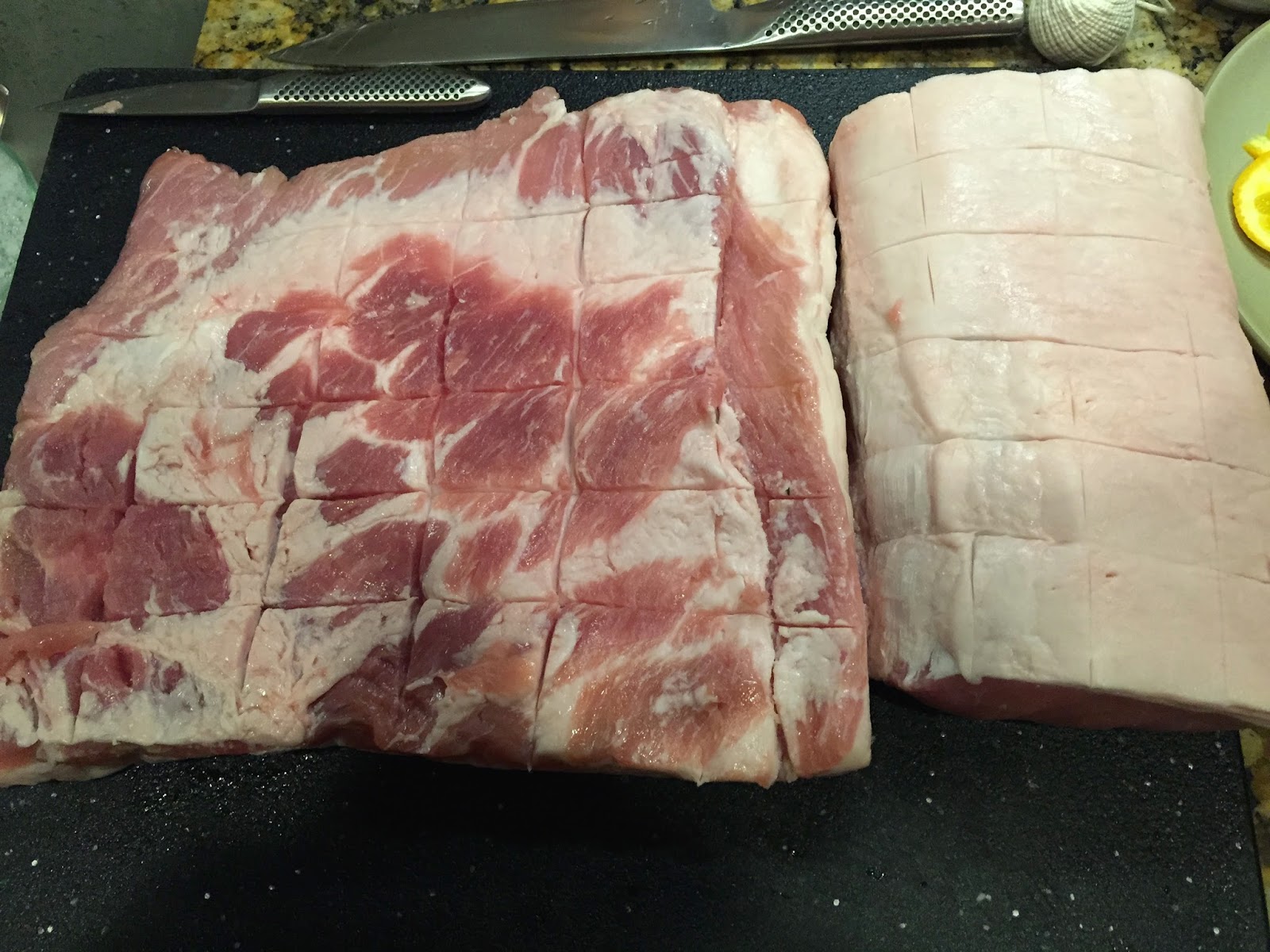 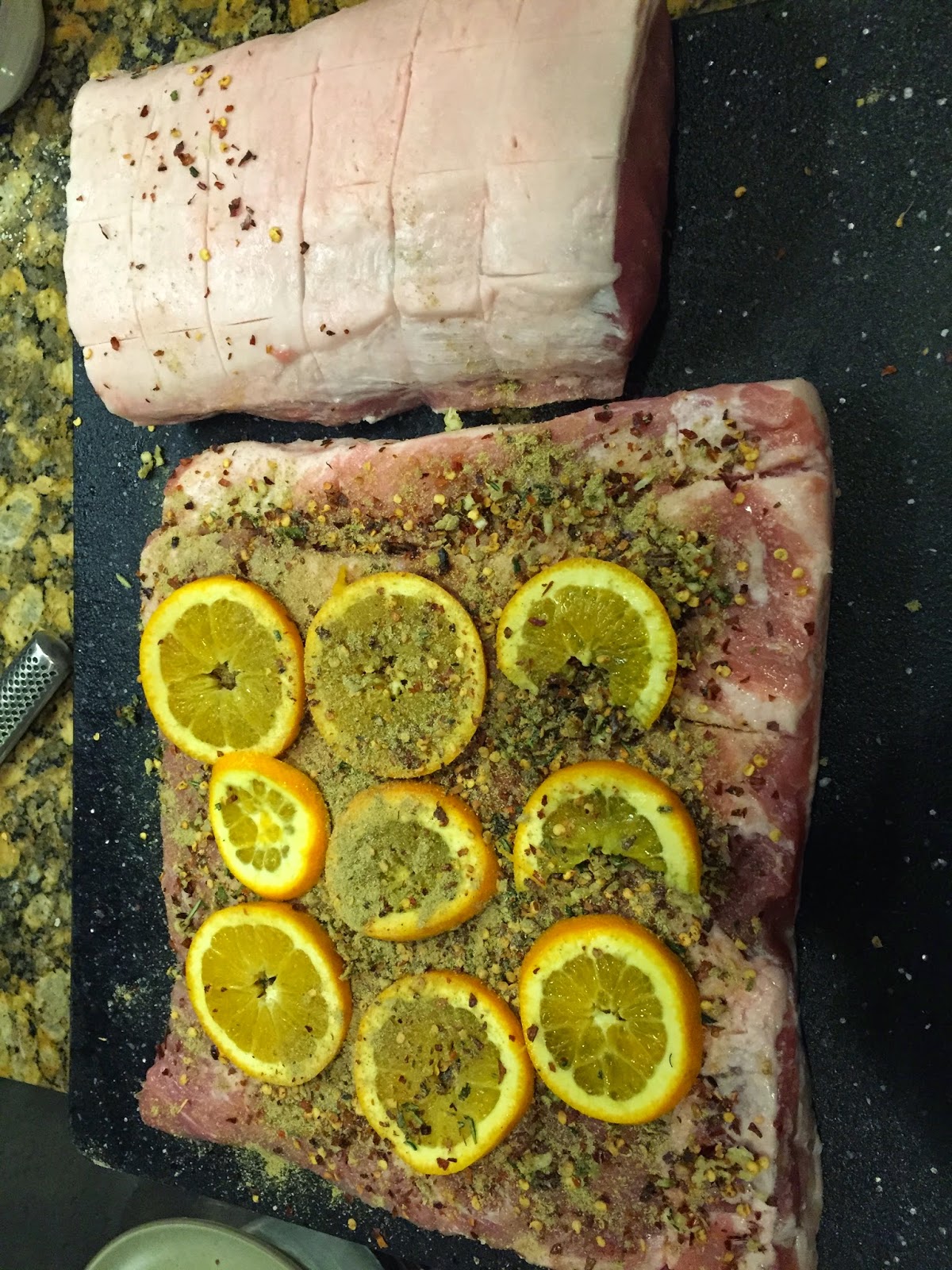 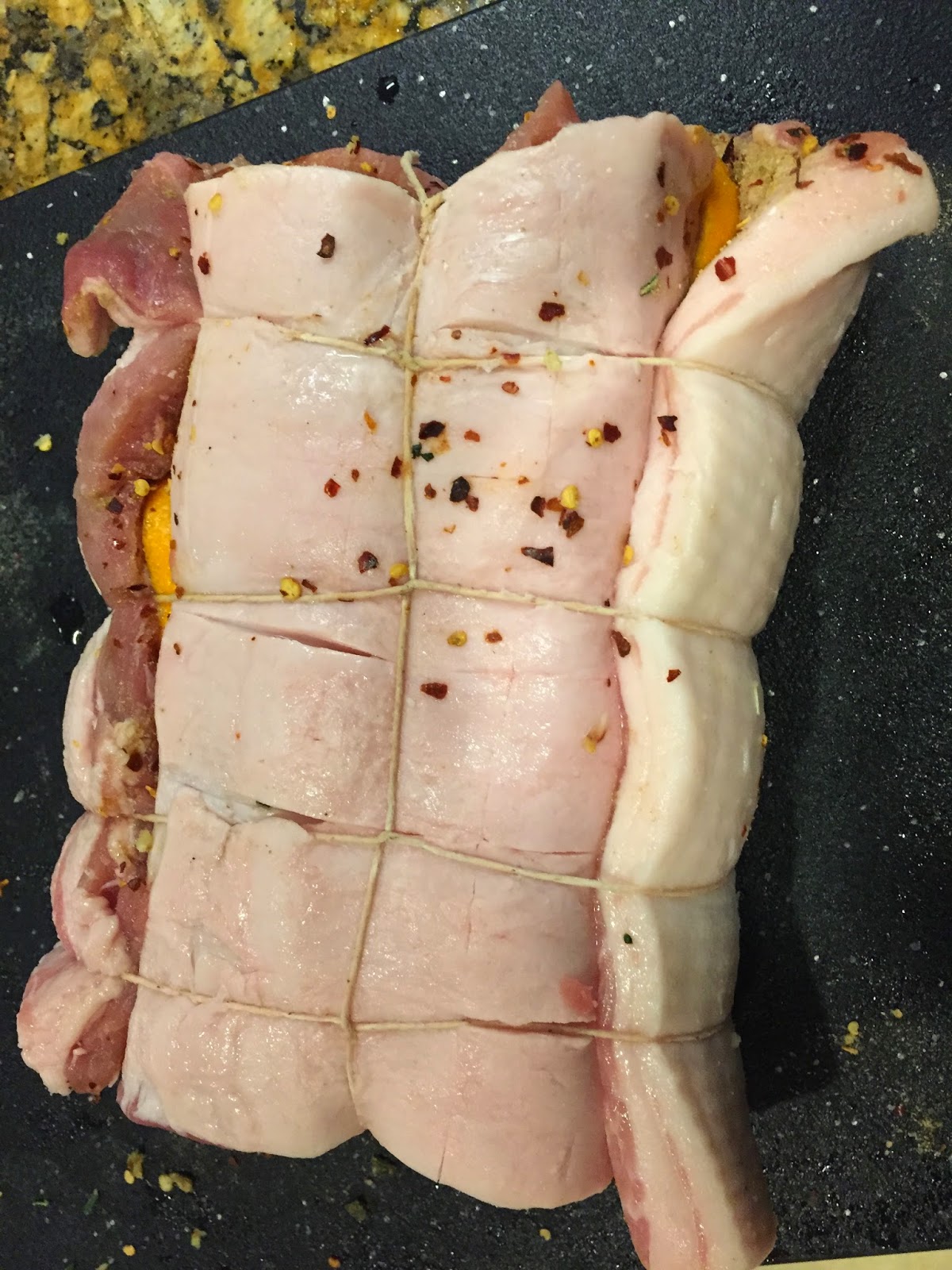 Rub outside of loin and inside surface of the belly with herb, spice and salt mixture (about 2-3 tablespoons of salt for the interior), arrange slices of orange along the inside of the pork belly, wrap the belly over the loin and truss using the technique demonstrated by Chef Pepin below.

Allow this to rest for 2-3 days in a refrigerator before roasting.

Remove from refrigerator 1-2 hours before cooking. Rub outside with another tablespoon of Kosher salt prior to roasting.

Preheat your oven to 500ºF and roast skin-side up for about 25 minutes, flip, and roast for another 20.

Reduce heat to about 300ºF and continue roasting skin side up for about another hour and ten minutes, or until a thermometer reads 145ºF in the thickest part of the loin.

Rest for at least 20-30 minutes before slicing and serving.

I swear I've seen this demonstrated by Chef Pepin dozens of times, and if you own any of the DVDs I'm sure you can find an example, but I cannot for the life of me find it on YouTube so here's Chef Edward Leonard for Le Cordon Bleu demonstrating trussing a roast:

As an added multi-media bonus, we couldn't help but avail ourselves to the "slo-mo" feature of our new smart phone... I couldn't decide with treatment I liked more, so here's both of them.

I give you Adam J. O'Donnell, carver of roasts...