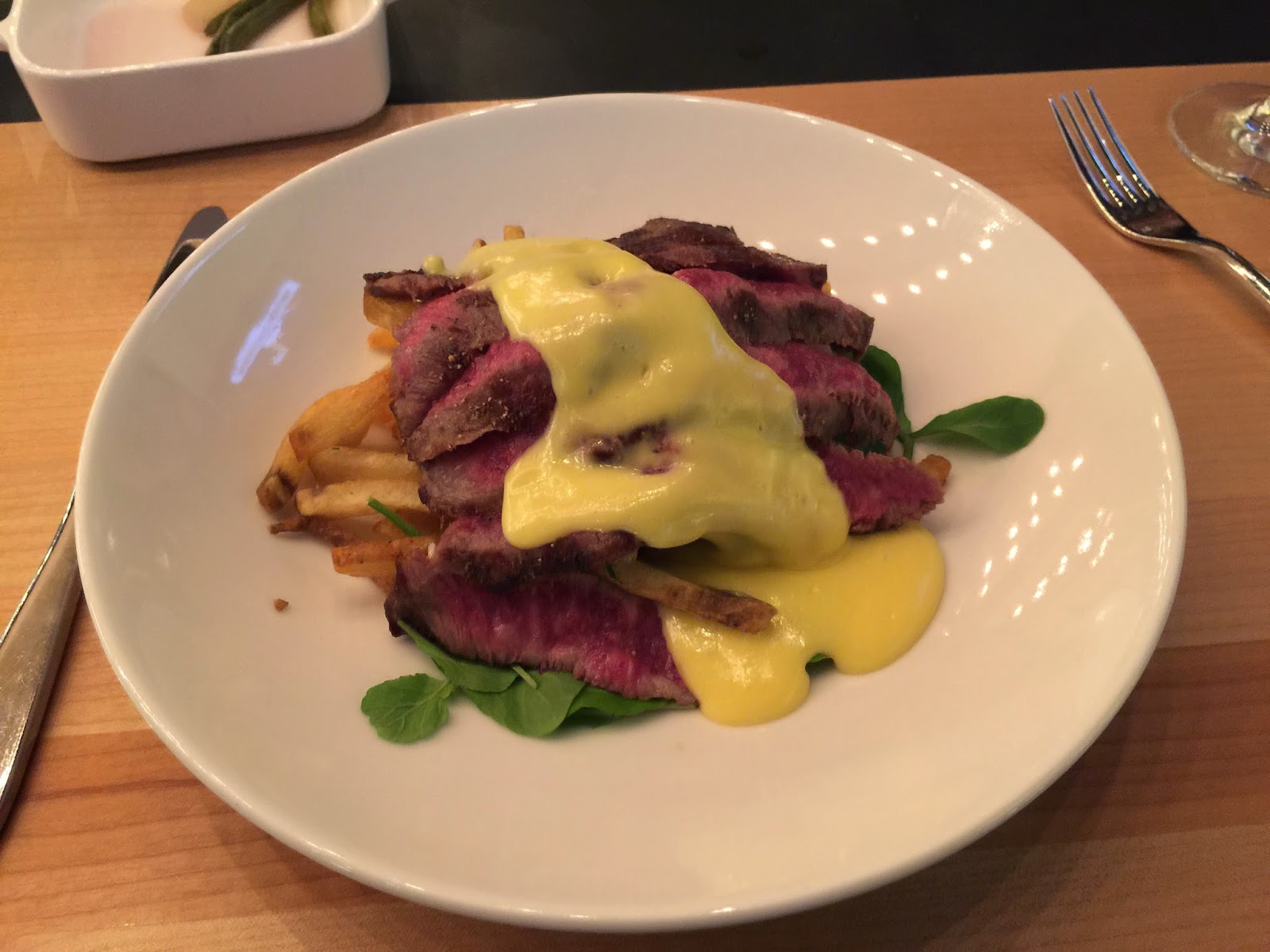 "It's not in the mall. It's under the dome, on the top floor with all the other higher end dining. But, yeah, it's in a mall," said Tap [415] general manager Nathan Sheeran last autumn as he was explaining the concept of the new restaurant to me.

Brought to you by the same folks that opened and operate Twenty-Five Lusk, where Sheeran worked previously as assistant general manager, this was a step up for Sheeran a few casual steps down from the haute cuisine, fine dining approach of Twenty-Five Lusk. Chefs Chad Bourdon and Matthew Dolan, of Twenty-Five Lusk, bring their much lauded skills to the Tap [415] kitchen.

Where Twenty-Five Lusk would be a good place to take a first date you aim to impress, Tap [415] is a good place to feed the kids while mom and dad knock back a few adult beverages after an exhausting afternoon of shopping. Yin, yang.

Tap [415] features casual pub-style fare with a San Francisco twist: farm to table bar food. Tap [415] is the kind of place you can enjoy a pint of a local microbrew, snack on pickles made from local produce and watch the local team on one of many flatscreens arranged around the periphery of the dining room (which feels, again, much more like a pub – wooden tables and bar stools in an open floor plan, with additional bar seating which peers into the kitchen just beyond a stainless steel pass).

I met my aunt and uncle there with a few friends of theirs who live in Noe Valley, sat down and made a point to lay my gigantic smartphone face down although I had just bought it the previous week and was still exploring its capabilities like a kid with a new toy. You see, I was running late in part because I was lost but also because I was strolling through the mall at a steady deliberate pace eyes affixed to my phone grinding down enemy portals in the smartphone "capture-the-flag" game Ingress.

"I'll take something sour," I told my server when I joined the table, their first round of drinks already half consumed. He returned with a Rodenbach Grand Cru, a barrel-aged Flemish-style amber ale and it was just what the doctor (me) ordered: a complex but easily drinkable beer evoking sour cherries, oak and caramel from the aging process, and just enough of that ethereal Flemish barnyard funk to keep things interesting.

What the beer was not was one of those boorish West coast hop monstrosities that are thankfully falling from favor (who wants to drink beer you can't taste after the first few sips?).

My elementary school classmate and Nathan's older brother, let's call him "Judas"*, doesn't like to pull punches when he criticizes a menu, especially if he can score a few low blows in the name of sibling rivalry.

We sat down for a drink after gorging at the not-long-for-this-world Yo Yo Restaurant to discuss Tap [415].

"I know, the texture was a little gummy."

We continued on in that manner like Statler and Waldorf for about another ten minutes, mostly theorizing how we'd approach Tap [415]'s signature appetizer: mix the meat into the tater tots then top with sauerkraut and Emmenthaler, or serve with a Welsh rarebit with chopped cornichon to mimic thousand island dressing, etcetera etcetera.

The appetizer in its current form is good, but could be made better.

Other starters include the now ubiquitous pickle plate – a carte blanche for showcasing all things briny and bubbly was here an opportunity missed by team Bourdon and Dolan. Of all the things in the world that can be made into a pickle you choose to give me beets? Haricot verts? I got three bottles of that at home next to my cold brewed coffee.

A "corn dog" preparation for Gulf shrimp which was probably my favorite appetizer: a satisfying, crunchy, salty bite of steaming hot juicy shrimp dipped in cornbread batter and fried.

I would have had occasion to order some of the other appetizers if I wasn't running late, but on a return trip I will certainly be trying the aged cheddar macaroni and cheese, arbol chile molé chicken wings, bacon wrapped miniature Frankfurters and, well, all of the appetizers sound pretty tasty.

Here's hoping these other appetizers stick their landings better than the Reuben tater tots.

* Everyone reading this from Sheeran's home town knows exactly who his brother is, still even to this day we insist on greeting one another using various noms de plume and so he shall go on being shrouded in mystery for the purposes of this blog.

Shifting into main courses, I ordered a glass of Argentinian malbec to go along with my steak frites, rare.

The steak, a seared flat iron, is laid across the crisp pommes frites and a scattering of arugula then topped with a Hollandaise.

The two most noteworthy things that I picked up on was first that the fried potatoes were particularly crisp and flavorful, no doubt fried in some kind of animal fat. Vegetarians, I would hazard to ask before assuming otherwise.

Second, the Hollandaise was perfectly executed and certainly looked to be a sauce a'la minute but I really felt that a dash of hot smoked paprika would have rounded out the look of the dish and added a nice little jolt.

Still, I found dipping my fries into the sauce to be quite relaxing, and I had gone into a sort of zen trance of starch, salt, fat, egg and lemon that while I was still working on my steak everyone else was getting up to leave.

Pretty good, but for $26, give me a dusting of some fancy paprika.

There are several other main course selections, including chicken schnitzel with an herbed spaetzle, BBQ pork shoulder with sweet potatoes and Alaskan halibut with napa cabbage and apples, pomegranate and crispy parsnips.

If you are looking for something lighter, the sandwich list looks like it delivers and judging from the voracity with which my uncle "Stretch", a 6'9" mountain of a man, devoured his smoked BBQ burger, Tap [415]'s sandwiches deliver.

There's also a dessert menu that I will have to revisit at some later date, but hopefully I'll too someday experience cake on a lollipop.

Nathan started his introduction to my family as he always does, "Christopher first met me when I was two years old at my brother's fifth birthday party."

It was on this occasion that Nathan's brother saw fit to abscond with my gold headed Destro, a crime he would pay for by sacrificing to me via cunning sleight of hand his hooded Cobra Commander.

Later he, persons D.L. and M.G. melted the first of many Zartan figurines I managed to get my hands on (Zartan would change colors to "match" the environment, a master of disguise!).

I am still plotting my revenge, Sheeran. Zartan's powers were no match for a Bic lighter and illegal Chinese fireworks, however. My many other Zartans met similar fates... but the gold headed Destro was not so easy to replace.

Nathan studied sports journalism in college and could be taken for a kind of portmanteau of Sports Night's Dan Rydell (Josh Charles) and Casey McCall (Peter Krause): quick witted, speaking in a quick clipped rhythm as if he could be reading off batting stats just as easily as beer selections.

Aside from some minimal service gaps and the now overly maligned Reuben tots (really, they aren't bad per se, in fact their quite good, they could just be better), Nathan runs a tight ship and as we shift from football season and through the hockey and basketball seasons into the pitchers and catchers reporting to spring training I'm sure the menu will also go through several revisions (should advice be solicited, Statler and Waldorf will come calling toute d'suite).

So with that, perhaps you will find me sitting in at the corner of the bar at Tap [415] some breezy day in March, watching the ball game, drinking a Flemish red ale, plotting a 35+ year vendetta, grinding down enemy portals while being pelted with tater tots by the kitchen staff.