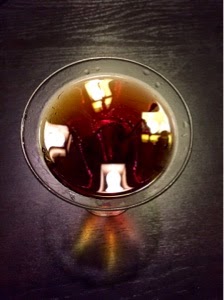 Today's cocktail contains two ingredients that might be hard to come by, but if you can find them the combination is magic. In fact, I only happened upon Cocchi's Barolo Chinato in BevMo at a ridiculous closeout markdown (listed at $45 I got my 500 ml bottle for around $9 if I recall correctly).  The last trip that I took to BevMo, however, found no more of this delightful Italian fortified wine.

With a base wine made from Piedmont's famed nebbiolo grape (from the Italian nebbia/fog) the source of barolo, Barolo Chinato has one of those bleary histories that types of alcohol and cocktails tend to have drunkenly thrust upon them, with several producers claiming it's creation. The debate hasn't harmed it's distinct and pleasing herbal flavor, though, and after a small glass beside its best pairing, (chocolate), I decided to try it out in a cocktail. After a bit of futzing with ingredients and ratios I finally hit upon the magic formula that both celebrated Chinato's distinctive flavor and made it smoother drinking. Yes, it still pairs wonderfully with chocolate. I tell you, this taste testing is hard work. ;)

Torani Amer, the other main ingredient, was just something that I'd started picking up once Amer Picon began playing hard to get in the United States (a friend and I once talked our way into our own reserved bottles at a favored restaurant as the U.S. supply was drying up). Produced to fill the gap, I'm told that Torani Amer is itself difficult to find outside of California. You'd think that with the popularity amer has gained in the last few years that it would be everywhere. You'd be wrong.

Something else that you might think is that mixing a fortified wine and an amer would make for a delicate and bitter cocktail. You would be wrong again. While the Cocchi Chinato, spiced with cardamom, callisaja bark, ginger root, rhubarb roots, wormwood, quinine, and other aromatic spices, does have a strong flavor, it's not overpowering (considerably less so, in fact, than, say, Fernet Branca). The citrus notes in the amer, as well as the sugar and lemon juice in the cocktail, smooth any bumpy flavors right out. As for delicate, with the Torani brand amer weighing in at 39% ABV and the Chinato bringing 16.5% to the party, this herb-infused cocktail is a heady combination. So, how to make it? See below.

Oh, and why "Allegory"? There is a reason. Can you guess?