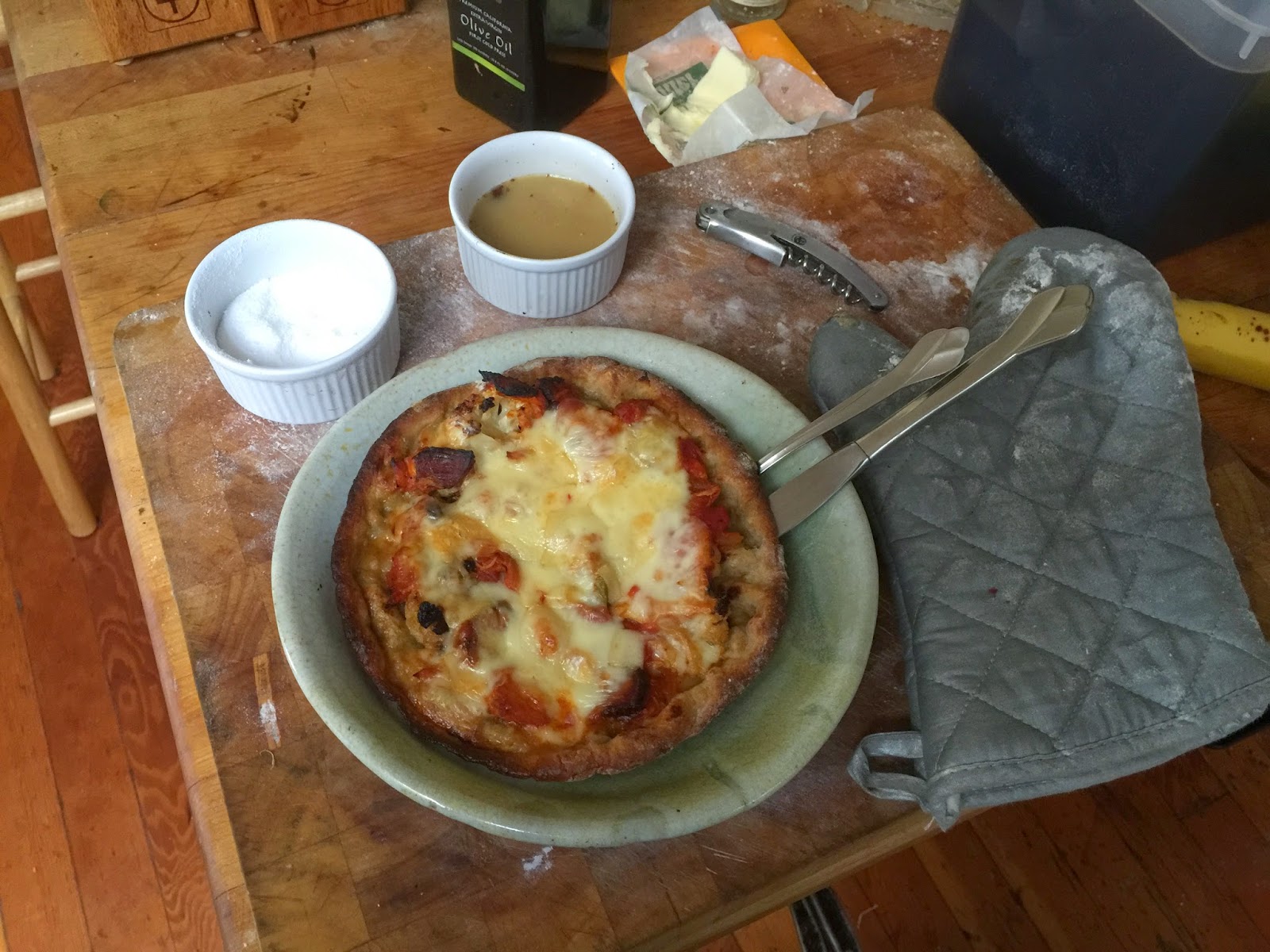 I took my roommate to Cleveland finally after she nagged, begged and pleaded with me to take her for years. Mostly this was to get her off my case but also to prove to the big city girl that there is life in the flyover states.

Most Clevelanders would not consider Cleveland to be a flyover city, but apparently people from the coasts do.

I consider most places in Iowa, Wisconsin and Nebraska to be flyover territory, and I imagine I wouldn't get much disagreement from folks in Des Moines or Lincoln, but I'm sure life exists there too. In fact, I know several interesting folks from Lincoln, Nebraska.

The point is this: don't take for granted that just because you grew up in some major metropolis that you are more cultured or better or even more interesting that anyone else. You aren't. You're just insufferably boastful.

Don't assume that everyone wants to escape from some town just because it's not New York, Paris or San Francisco. Don't assume people put down roots because they are backwards hicks.

On the way to the eastern suburbs from the airport, we passed through downtown Cleveland. We drove past Jacob's Field (now incorrectly called Progressive Field), next to which is the Aladdin Baking Company. Aladdin pita bread is ubiquitous in the rust-belt, especially Cleveland.

Children all over Cleveland grew up with pita bread as a staple in their diets. I was particularly fond of the pita pizza, which mom or dad would help bake in the early days in the oven. Eventually I was old enough to use the microwave, and the pita pizza became a go-to after school snack that I could make myself.

(Although I learned my lesson about putting the whole bag of pitas in the microwave, metal twisty tie included, because you will set the microwave on fire and definitely get a spanking.) 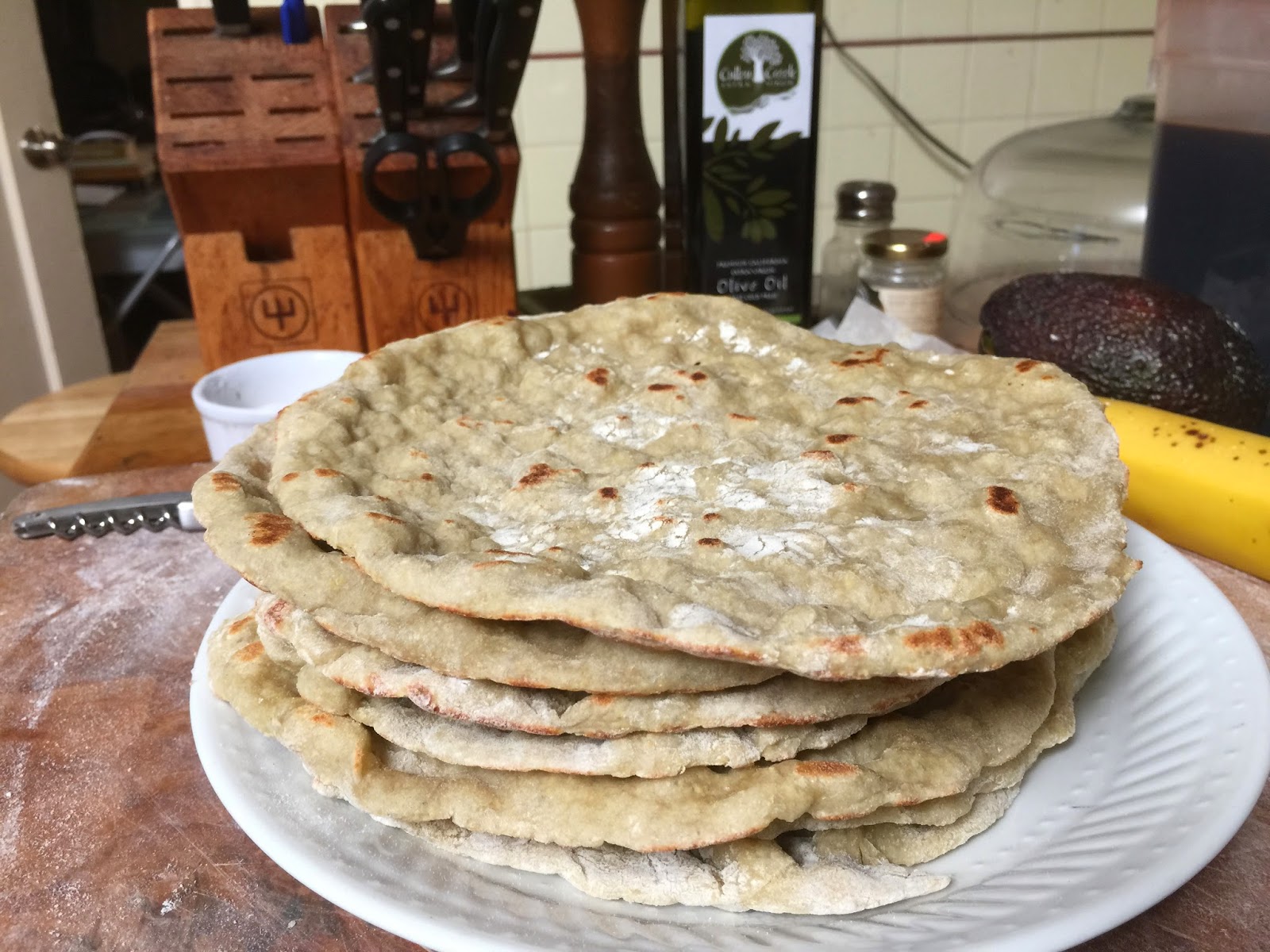 I woke up this morning pretty early due to my pager going crazy (I haven't carried an actual pager in year, some clever so-and-so came up with a "pager" app for smartphones; those of you unfortunate enough to be on-call in tech jobs probably know the exact app of which I speak).

So I worked through for several hours until I had a temporary fix in place and realized that I was hungry despite ingesting more than two pints of cold toddy brew coffee. I also realized that I had eggs, I had avocados, but I didn't have any tortillas or bread or even crackers or nachos.

That was the sort of starch I was hoping for, yet sadly lacked.

I was trapped at home for the next several hours.

I had flour, water and yeast.

I knew just which bread I wanted to make. 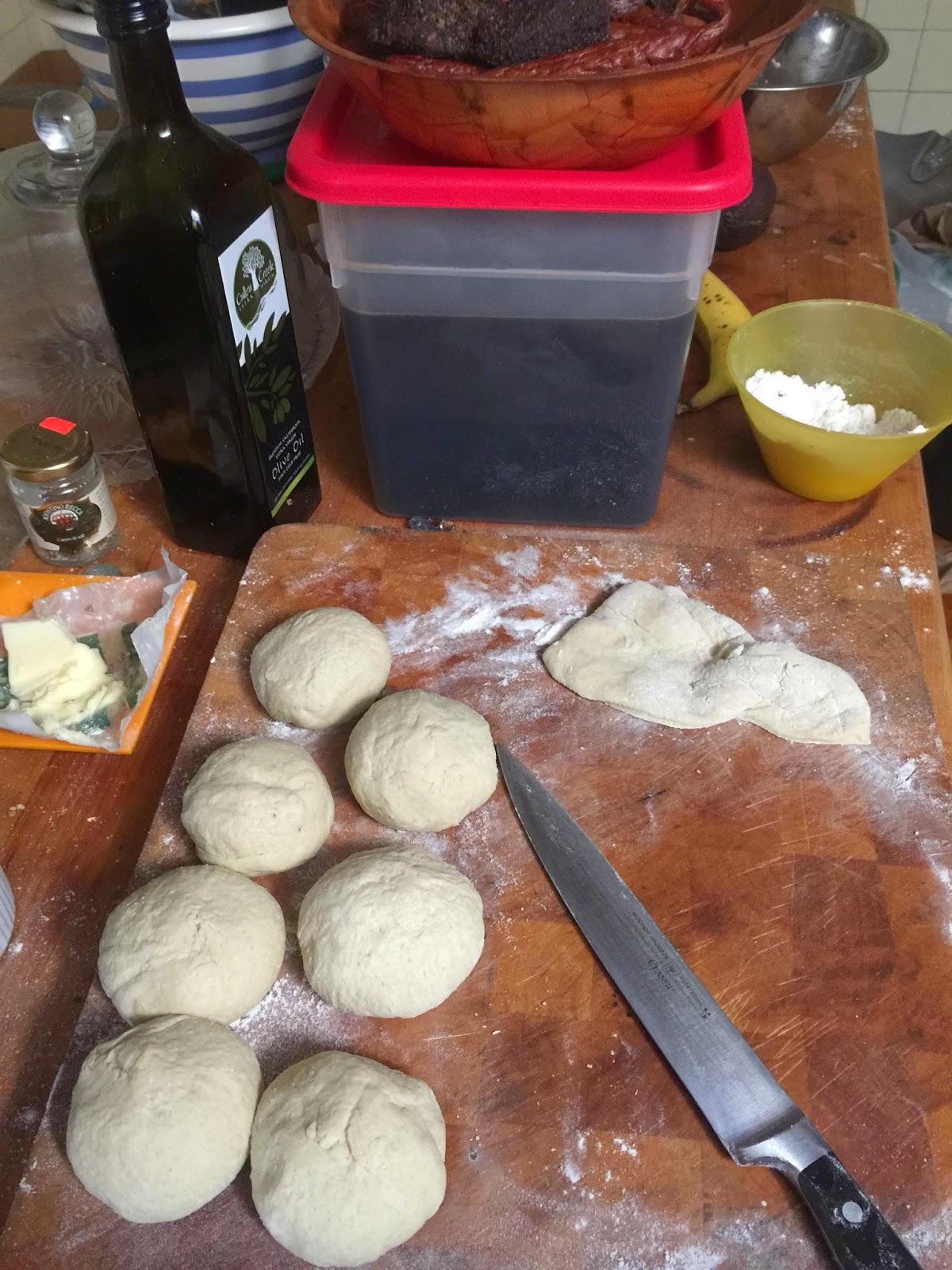 
Sift dry ingredients into a mixing bowl with the warm water. I'm using a KitchenAid stand mixer with a dough-hook, which I mix at increasing speeds (stopped the motor and scraping dry flour off the sides as needed with a silicone spatula) until I get it going at full speed and the dough forms a ball around the hook and does not stick to the walls of the mixing bowl.

Transfer this into a cleaned and oiled bowl and cover for about 30-40 minutes.

Turn the dough out onto a well floured work surface and fold the dough over several times, flouring as needed. 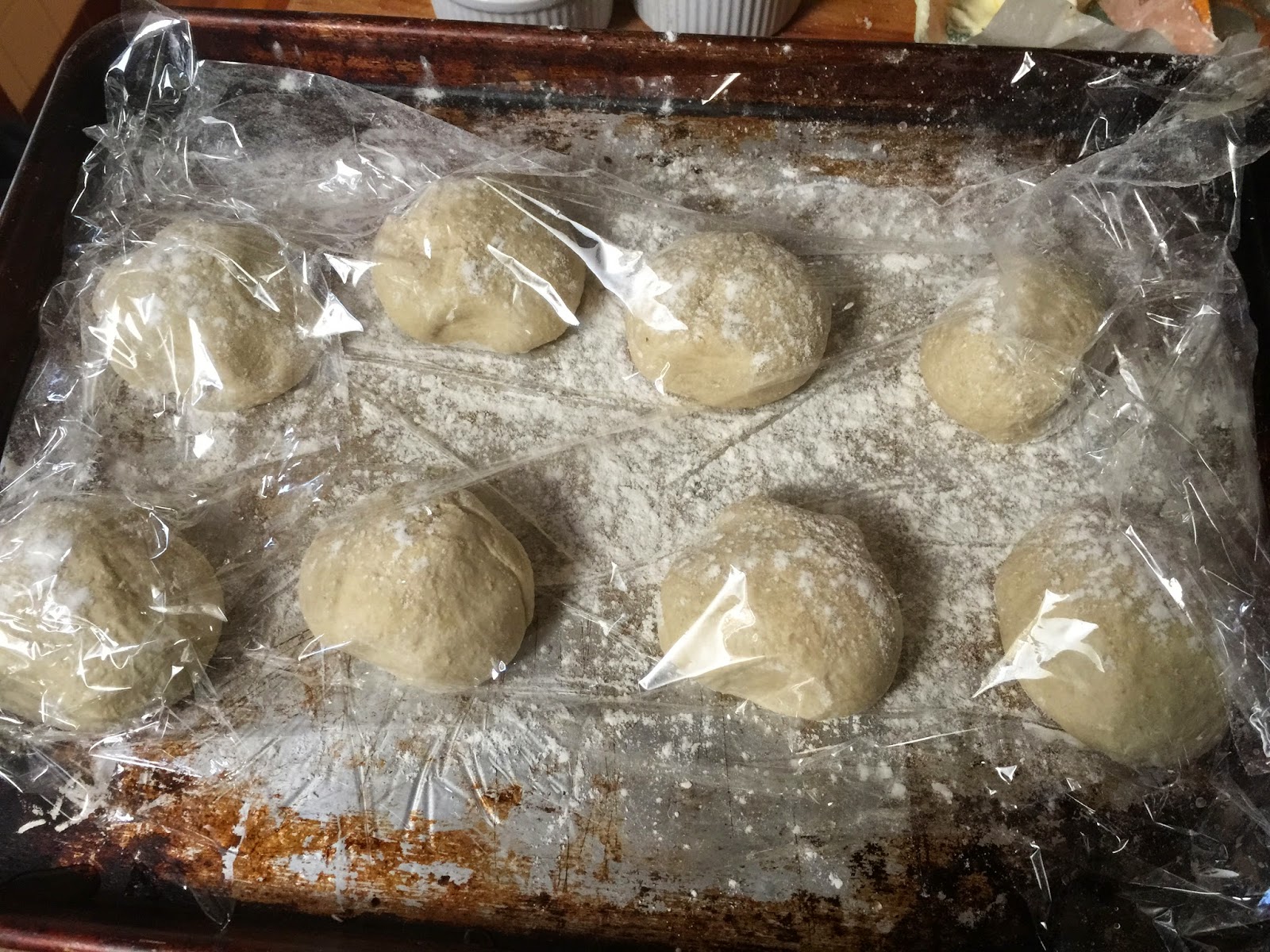 Divide the dough into 8 roughly equal portions and then roll each portion into a little ball. Arrange on a floured baking sheet, dust with more bench flour and cover. Store in a warm place for another 20-30 minutes.

Preheat a large skillet or cast-iron pan over the stove on medium to medium-high heat.

Working with each round separately, flatten the ball with your fingertips, adding bench flour as needed, flipping over a few times.

Place the flatbread into the hot, dry pan flat side down and cook, covered, for about 2 minutes, then flip and cook for about a minute more.

Stack on a plate like pancakes and cover with a towel to keep warm.

On a lightly oiled cookie sheet place your pita bread.

Brush the top of the pita with olive oil.

Sauce, top and cheese it up.

Bake for about 12-15 minutes on the top rack of the oven until cheese is melted and slightly browned.

Cool for at least 5 minutes before eating as you will burn your mouth. 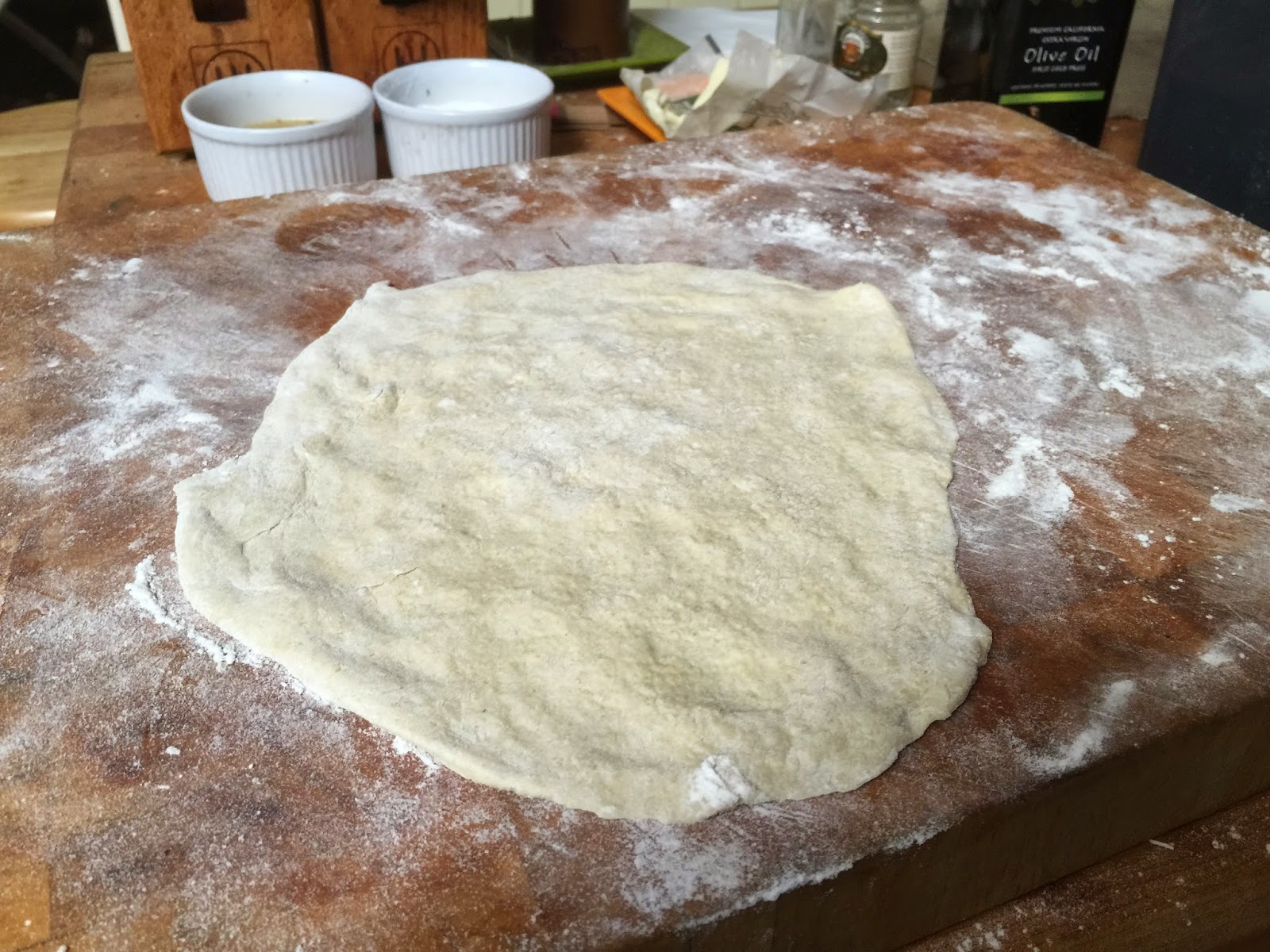