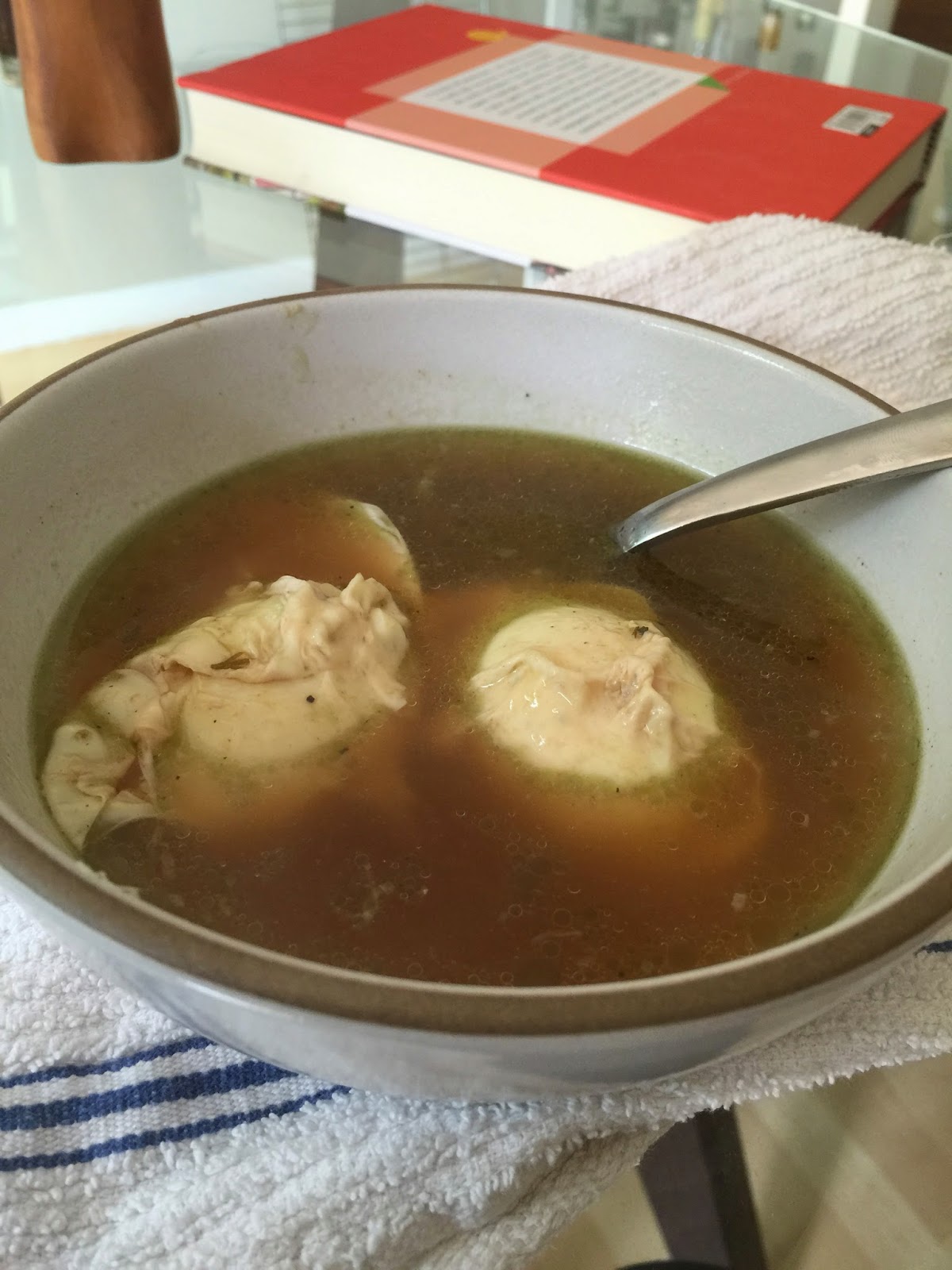 The planning for Porkpocalypse IV: The Forage Home began in earnest this Sunday with a light brunch over at Dr. O'Donnell's domicile (and the future scene of the crime).

Walking up to his house, Adam yelled "hi, girls!" over the fence separating his driveway and walkway from the back yard. It took me a second to realize he was greeting his chickens which he keeps penned in a large custom made coup (they are allowed to roam the back yard but at night they are safest sheltered away from raccoons, skunks and the occasional wild dog or neighborhood cat).

They produce a modest amount of eggs, some of which I was looking forward to eating during brunch.

A light chicken salad was had followed by eggs poached in chicken broth, seen above.

It's a light but fulfilling breakfast that fits in with Adam's proclivities toward avoiding carbohydrates – a trait that reminds me of my old man and his wife, the ISM (Inexorable Step Mother). Had I my druthers I would have added a nice buttered piece of toasted sweet batard or olive bread to dip into the broth.

Do I condescend to you dear reader to explain how this is made? The broth is brought to a light simmer, stirred and then the eggs are dropped in one at a time, centrifugal force helping to keep the uncooked, still liquid egg whites tightly hugging the yolk.

Serve with hot broth, garnish with a grating of pecorino or Parmigiano-Reggiano and a sprinkling of Italian parsley.

What's more important to know is how to make a proper broth, or stock (or even consommé) once you have got your hands on decent quality eggs.

For that I refer you to this blast from the past: Sipping Consommé With William Howard Taft.

Coincidently I stopped by Olivier's French Butchery yesterday on a lark and walked out with a couple of big bags of chicken carcasses ($2/lbs) and a beef tendon ($1/lbs - probably from the onglet).

Those are now roasting in the oven, the end result will be a variation of standard chicken stock that is deeper in color (also boosted by the addition of tomato paste early in the cooking process).

When finished I will have something that the kids are inexplicably calling "bone broth" and selling for as much as $10 for a mug in trendy restaurants.

Bone broth is an artifact of the fad Paleo diet, a diet that presumes that pre-historic humans were healthier prior to the last ice-age and the advent of grain and livestock cultivation. In my uneducated opinion I think that it's unlikely that a diet that stunted the life spans and growth of a small population of humans 30,000 years ago is something one would want to emulate.

Of course, hunting and gathering is as easy as pulling your Lululemons on and jumping into your Porsche Cayenne to drive half a mile to the nearest Whole Foods to pay $30 a pound for chanterelles that some clever primate went out and picked themselves to sell to your yuppy ass.

Over the course of the evolution of a fad diet at some point it enters the stage of taking on the features of a religion, with agnostic and extremist adherents, official Canon and of course a lot of shouting and nonsense.

That's when you find yourself sitting in a restaurant in Ohio City in Cleveland (and perhaps future Chowbacca subject – I only went to pre-game the West Side Market with a strong cocktail), staring at a menu offering probiotic cocktails, gluten free and paleo food stuffs and yes, a $9 bowl of "bone broth."

Broth is packed with nutritional value, mostly in the form of dissolved proteins (mainly collagen, which is a very strong protein that is used to construct the sheaths of membrane that surround bundles of muscle cells, and connect muscle groups to bones and one another). Broths will contain some fat, emulsified within the water solution or lazily floating on top of the stock. Broths also contain sugar extracted from both the meat and the aromatics used in cooking the broth, as well as any micronutrients that survive from the essential oils in herbs and spices used in stock making.

Save yourselves the money and make your own stock.