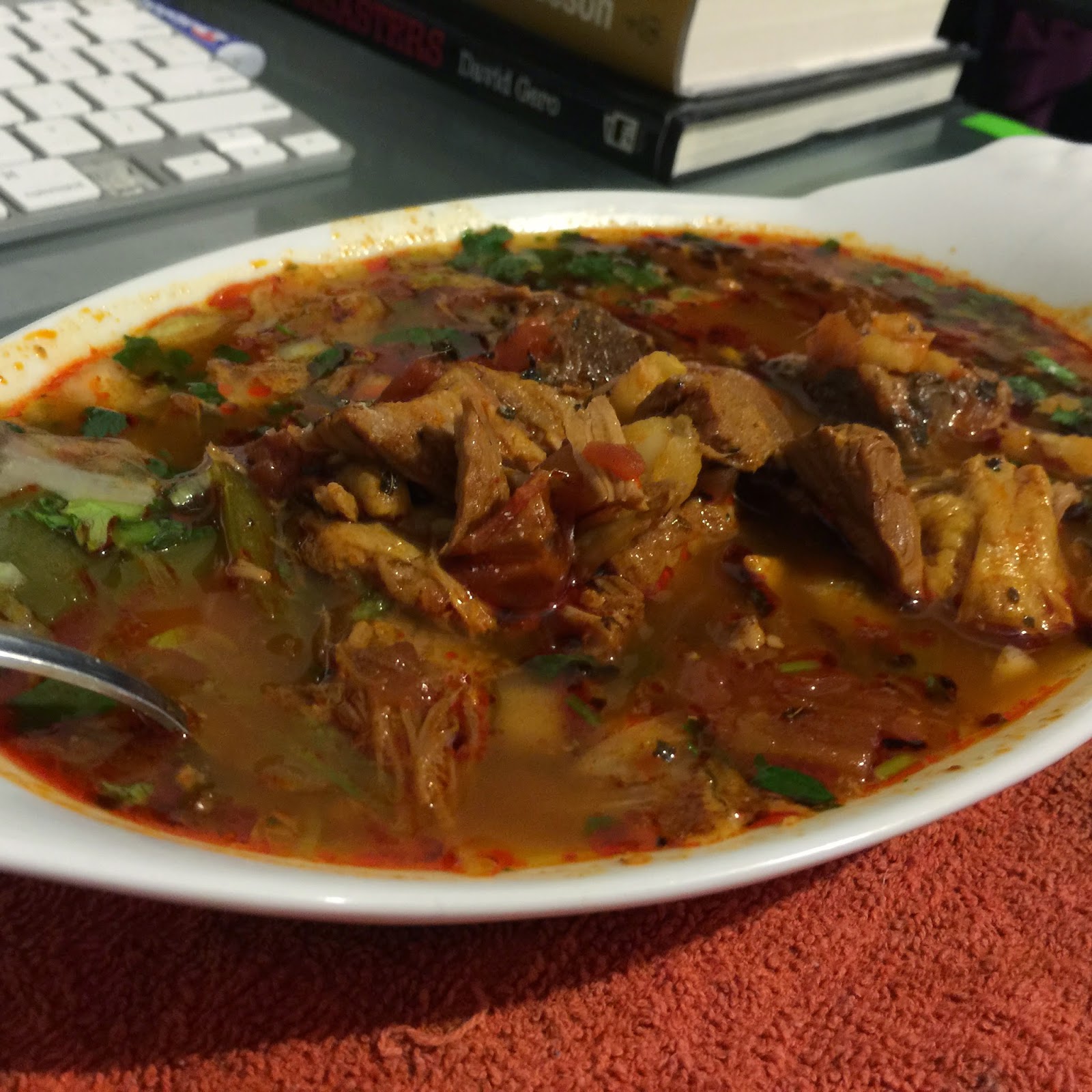 A text from Sine blurted through my phone, interrupting the third episode of Marvel's Daredevil on Netflix I had started to watch, asking "did you try the short ribs?"

Some weeks ago I brought her a mason jar full of "bone broth" (really, just stock, but in fancy hipster terms) to help her convalesce from a case of the winter ick. Yesterday when we took our jaunt to Rainbow, she returned the jar filled with stewed short ribs and cherry tomatoes.

"I think I overcooked them," meaning the ribs, said Sine stating the impossible: I personally don't think such a thing as over cooked short-ribs exist, "they're too mushy."

"Nonsense," I said texting her back after pausing my stories, "I love mushy meat anyway."

One of the Chinese buffets down in the FiDi served a stewed beef, all tendon and silver skin, a brown mess of dissolved collagen – unctuous.

My fancy butcher in the Dogpatch is selling beef tendons for about $2 a pound. Compare that price to about 50 cents a pound for trimmings at a local mercado – however Olivier's Butchery swears by the pedigree of the beef they sell and the bona fides of their purveyors.

I plan to stew the tendons sous vide and serve chilled with a Sichuan pepper oil and fish sauce over a bed of greens and herbs, tipping my hat both to Chef Danny Bowien and to Cleveland's Szechuan Gourmet.

After chilling over night in my refrigerator a nice white cap of tallow formed on top of the stewed short ribs. I reheated some stew, reserving the fat, and served it with grilled whole wheat tortillas and an orange.

The adversarial relationship between hydrous and lipid phases delivered me an opportunity to simply spoon the solid, waxen mass of beef fat from the top of the mason jar and set it aside for future nefarious purposes (beef tallow was what famously made McDonald's original French fried potatoes the king of spud-based fast food accoutrement and stayed on top until they were forced to change their frying method to use non-animal based oil; soon Wendy's toppled McDonalds fry hegemony – especially when coupled with a chocolate Frosty – I digress, but I would not be surprised if the tallow I have saved won't one day fry a potato which I will then dip into a chocolate milkshake).

Reheating the stewed short ribs released plenty of trapped fat from within tender chunks of meat.

The next evening I integrated the last half cup of the stewed short ribs with a pozole I bought from Casa Mexicana, the Domingo Especial, pictured above.

I'll be lending Sine many more mason jars in the future.

Speaking of lipids we love to save, here's a good application for that leftover bacon fat you might have...


Dust ribs with flour and brown in a 8-quart stock pot over high heat in batches. We like bacon fat as the lipid of choice, but we would certainly never stop our devoted reader (hi, Darren!) from using whatever was handy, be it butter and olive oil, duck fat, beef tallow or plain or lard.

Once browned, return all meat to the pot and add remaining ingredients.

Bring to a quick simmer on medium-high heat for about 45 minutes to an hour, then cover and reduce heat to low and cook for another 4-6 hours, until meat is desired tenderness.