While Ol' Doc Gus has been following, and thinking about, the wacky adventures of "Hannibal, the Lovable Cannibal" for some time now, I've only recently been ill enough to binge-skim the series, (I admit that some of the the "Freak of the Week episodes were either zapped or skipped entirely in my viewing of seasons 1&2). There's nothing like having a head that is threatening to go all Scanners on me to make me sit through hours of television.

So it was that I embarked on a journey that several of my friends have been telling me to take since the first season of this NBC anomaly. Seriously, an over-the-top gothic bromance between ridiculous serial killer Hannibal "The Tyrant" Lecter and his gender-swapped profiler in the ripped bodice, Wil "The Virginal Maiden" Graham featuring some of the most elaborate uses of a corpse ever seen on television, let alone NBC? That's almost crazier than the insane plot of the series. I've heard fans of the show complain of its cancellation, but ... wow ... you folks are lucky that NBC hung in for three seasons.

If the show had been marketed as I've described it above I might have liked the first few episodes more, but NBC seemed to feel that a combination of the popularity of Thomas Harris' source books, (two of which weren't a clown-car of horrors), their corresponding films, (two of which, etc.), and the television audience's enduring love of police procedurals were all that was needed to snag viewers. It's cancellation doesn't support that decision, and my own initial dislike of the series was because I didn't have a clear picture of what Bryan Fuller and company were trying to accomplish. I wasn't watching a police procedural. I was watching, I came to realize, a gender-swapped Grand Guignol-style gothic, (and so, so Grimm), fairy tale about a world where we're all just entrees and art supplies for murderous obsessives.

This is not a spoiler. If Hannibal the series had been more accurately marketed as a modern Dark Shadows-type show, (in Hannibal nearly everyone is a serial killer or murderer of some sort, in Dark Shadows the vampire's cousins were witches and werewolves. Hilarity ensues), it may have grabbed its target audience sooner and may have been spared the wrath of a lot of the CSI-fed "we wanted good cops chasing bad guys" types calling it crap because they had been misled. It's not like there aren't other fairy tale shows around right now, they're just not as subversive,  nuts, or, (for lack of a better word), pretty, and, arguably, truer to their art form as Bryan Fuller's Hannibal.

While playing up in the media the contributions of Chef José Andrés and food stylist Janice Poon seemed like a good idea, I have to wonder how many of Food Network's legions of food fetishists would care to see their obsession applied, even fictionally, to cannibalism. What was once a handful of Lecter one-liners in Red Dragon (/Manhunter) and Silence of the Lambs has been raised, laughably, to an art, and this is what most viewers of the show, myself, for a time, included, seem to miss: Hannibal is FUNNY. Sick? Yes, but FUNNY. Comedy is subjective, it's true, and a comedy that appeals to students of gothic literature/film, hokey vampire stories, Thomas Harris fans, and fans of the absurd is REALLY subjective. Again, I'm impressed that NBC kept it going, with dismal ratings, for three seasons.

Okay, now, before I go any further, come the spoilers for seasons 1, 2 and 3 of NBC's Hannibal. Go watch them where they stream and read on. 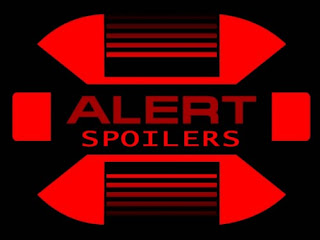 Assuming that the baffle can come off now, how can you not laugh unto tears at this show? Wil Graham's perpetual damsel-in-distress following Hannibal to a romantic dream-date in Italy in Season 3 has been the icing on a quite funny cake, and Hannibal carrying his true bro through the snow, after rescuing him from Mason Verger's planned "facial" at the Muskrat Farm spa, lit a big, fat, candle on top of it all. If you don't agree, go watch Gas Light and then re-watch the budding and building bromance of these characters. If you're not hooting by then, well, comedy's subjective.

Fuller has said that Hannibal doesn't take place in the real world. How could it? No world could support the number of serial killers the series proposes, serial killers who need time and space to create Sistine Chapels of corpses on beaches, in silos, and through the asphalt of parking lots. If the world of Hannibal were our own half of us would need constant police guard to protect us from the liver-craving other half. This is some other news that may have come too late for most viewers. The artsy-fartsy use of corpses throughout the series likely left a bad taste in the mouths of those CSI fans seeking "realism".

Sure, he could have gone the other way and made CSI: Lecter. He could have given that audience what they craved, more of the same crap they already get from a dozen shows every season. Instead they got a misunderstood little tale about a sad little cannibal who is loved by all, but just wants a friend.

Did I mention that everyone loves the guy who wants to eat them? Smells like modern society's cooking. What's for dinner? Us. He's the house cat that "loves" you back, but who is going to eat the eyes out of your skull when you drop dead. Sick? Yes, but funny.

Of course, while everyone on the show seems to embrace death's stylish visage, not enough viewer's have to keep the experiment going.

Do I think that Hannibal is the best thing to happen to television since ever? No. It's no Breaking Bad or Better Call Saul. It is, however, proof that television that takes risks is good television. While I'm sorry that no one has picked it up following its cancellation (for contractual reasons or otherwise), and even sorrier that mismarketing and a general misunderstanding of the series led to its end, I think that three seasons is plenty for the story it has told. In fact, as a friend pointed out, it would have been nice if it had ended with the events of last week's "Digestivo", which would have segued nicely into Michael Mann's excellent Manhunter and its hunt for the Tooth Fairy.

All of that said, the food was pretty.