Walking to Nowhere in Particular and an Autumn Braise 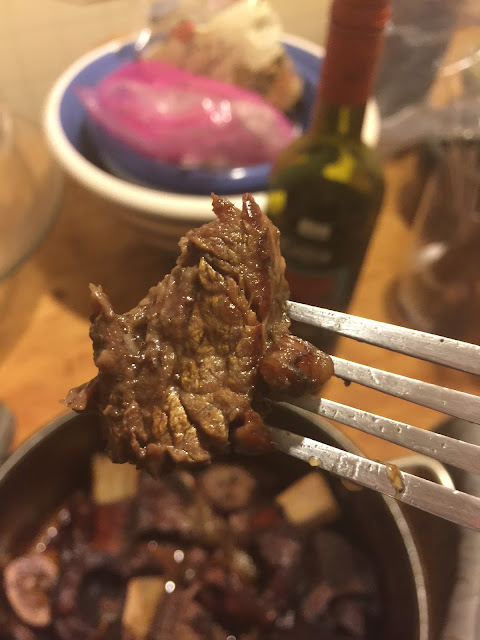 Some years I bounce of the wall with excitement at the first whiff of autumn in the air, and other years it's a slow fugue that lets off finally in the spring.

This is an off year, I think, and I'd been feeling a bit overwhelmed. Still, I have to get out of the house these days now that I have an office to go to, and when I feel up to it I like to blow off steam walking, biking, taking busses or trolleys around San Francisco with no set course in mind or agenda.

Well, that's not true. I look at the Niantic Ingress Project "intel" maps and look for targets – swaths of green to clear away and replace with blue in a global nerdy game of capture the flag (I just hit level 11 the other week, after what seemed to be an endless trudge through acquiring the required points and achievement badges). Worse, I am starting to sound like one of "those people", you know, game fanatics.

Still, Ingress has been described as a glorified fitness app, and in this city of 48 hills with some of the game's most valuable items perched atop Grace Cathedral Hill or Potrero Hill or Bernal Heights or up Haight in Golden Gate Park, calling Ingress a fitness app is fairly accurate.

My travels on one particular Saturday had brought me in a loop where I walked up over the 101 footbridge at 18th and Utah to hit a park bench that was an in-game item, then the Slovenian Hall, then what the hell, Anchor Brewing Company has about four portals. I switched back, this time ducking under the 101 via 16th street "bumping"* a fire station on Vermont Street, "smashing"** and claiming Il Pirata – a local watering hole the caters to the folks who work at the big UPS depot on San Bruno. Then ZipCar on 17th, a famous mural, an art gallery and I was off to catch the Muni 33 route to get brunch at the Dolores Park Café (pretty good food, and far less crowded than San Francisco nouveau riche brunch mecca Tartine located at the other end of 18th Street on that same block; maybe I'll write it up soon).

We ate, we walked up Dolores because my brunch mate plays too, we "bumped" a couple churches you may or may not have seen in several famous films (including Vertigo), and walked back down 17th to the 500 Club, where I split off and found myself wandering toward Duboce Triangle (between the Lower Haight, mid-Market/Castro, SOMA and Western Addition neighbourhoods).

Golden Produce is a mid-sized grocery that is defiantly located across from Safeway on Church Street, which looms and glows and buzzes like a borg cube or some alien thing poised to obliterate us all with a phaser blast – when it is good and ready, and not a moment sooner. I wince at it, and the hum of the overhead cables that run lines N, J and K that go underground behind Safeway. If you continue up Duboce you'll reach a park, boutiques, hair salons and original pre-quake wood framed Victorians that have so far resisted the monsoon of boring "modern" luxury high-rises that punctuate mid-Market and the Mission with their monolithic sameness.

I stepped into Golden not knowing what I wanted, and I still didn't know when I got to the butcher counter. Forced to make a quick decision, I opted for braising meat: English short ribs and beef shanks.

Enough Ingress, enough fluorescent lighting, enough people and sounds and everything. I needed to take my groceries and run to ground where I would be safe. So I walked over to Lucky 13 into the nurturing arms of my surrogate bar-mom / hot rocker / unapologetic Kansas City Royals fan friend, Lotta. 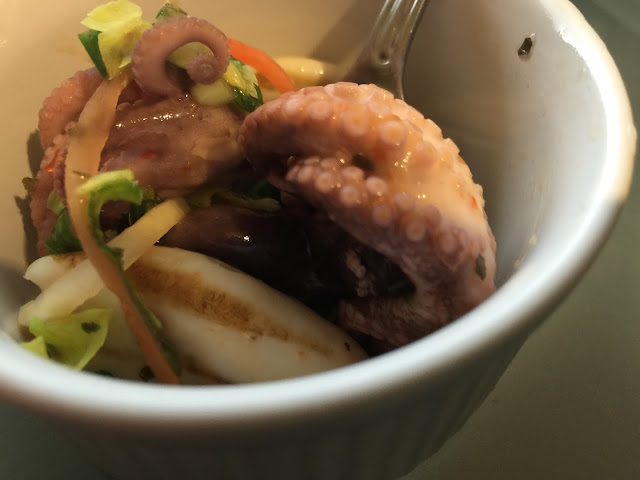 I had a large container of stock that I had made days earlier that needed to be clarified or tossed in the freezer, so I bought egg whites knowing that I had some (wilting) carrots and celery at home.

I knew I had "too much" celery for the amount of stock I had so I devised a way to use up the celery hearts, those yellow-green, tender, pale stalks that are the under appreciated gem of each bunch of celery.

I chopped these up, along with some sweet pickled white onions and fennel I had laying around and tossed them with pre-packaged baby octopus and calamaris packed in oil (I reserve the oil, which is usually a light late pressing of olive oil and herbs, for salads) and gave the whole thing a squeeze from half a lemon. 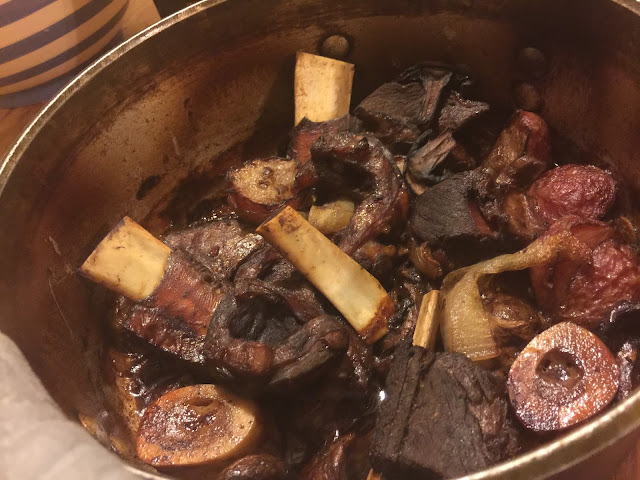 Also extending the celery somewhat, I blended two or three stalks, trimmed and diced, with about 1/4th of a yellow onion and 5 or 6 anchovies and a splash of red wine.

The resulting paste was rubbed into the shanks and ribs and let to marinate uncovered for a couple of hours while I ate my little Insalada di Mare and drank some wine and watched bad TV.

Pre-heat oven to 350ºF. Find a straight-sided 5-quart roasting pan with a lid.

Out of the marinade came the meat to drip dry on a rack over a small toaster oven pan.

I reserved the marinade, returning the meat to the same bowl after searing the meat for color. Then I seared several large white button mushrooms (the largest, the size of a baseball almost, halved), and that too went in with the marinade. I deglazed with a splash of wine, dumping that into the marinade, and then fried 4-5 large radishes cut and placed cut side down in butter in the cooking vessel.

...Into the marinade those went after they had nice color on the cut and rounded sides. I chopped half an onion, dumped it into my mixing bowl, drained half a bottle of cheap but drinkable red wine into the bowl then transferred all to the hot pan. A ladle or two of stock, a bay leaf, and the cover went on and the whole thing was transferred into the oven, which I had turned down to 275ºF, for at least 3 hours.

After the kitchen smells unbearably delicious, and you've finished whatever was left in the bottle of wine (and perhaps moved on, as I had, to stronger stuff), remove the lid from the pan, ladle in half a cup of stock, turn the oven back up to 375ºF and cook for a final 30 minutes.

I set the cross cut of the femur aside, and crudely sucked the marrow out of the center once they had cooled off, in the middle of my kitchen late at night like some sort of feral beast.

I served some stewed meat and vegetables with fancy organic ramen noodles ($2 a packet instead of 59¢).