I had debated bringing my prescription glasses (which correct myopia and night blindness, both of which are relatively mild for now), but I only really need them to drive and the day being New Year's Eve 2016, driving was not in the cards.

Because I had not brought my glasses I used a low-fi, high tech trick I had learned years before at Pacific East Japanese Restaurant on Coventry Road and Mayfield Road in Cleveland Heights: take a picture of the specials board with your phone and read the specials list from the comfort of your seat (we sat at the sushi bar) instead of standing in front of the kitchen door squinting at the board.

Ultimately for this particular visit it didn't really make a difference since we opted to go with dealer's choice and order omikase.

Chef Freeman Ngo and his wife opened Pacific East in 2002 and quickly became a neighborhood institution that has since branched out into a small local franchise.

They also happen to serve some of the best sushi in Ohio. There are those who tell me there is better sushi in Ohio, however I haven't been to the competition: a hand full of small shops around the fringes of the metropolises of Northeastern Ohio whose names are uttered with the reverence held for their more recognizable counterparts on the coasts (Nobu, Blue Ribbon Sushi, Beni-Hana – just kidding, checking to see if you were still paying attention).

So, that's a goal for the new year, n'est pas? Not the Beni-Hana part, the "eat all the sushi" in Ohio thing.

Speaking of Nobu, according to the Pacific East creation myth Chef Ngo cut his culinary teeth working for none other than Chef Nobu Matsuhisa. Looking to settle down and escape the bustle of the Big Apple, Ngo set out to find a suitable location to open his own restaurant with his wife.

How Ngo and wife ended up in Cleveland was explained to me by the chef: "I wanted to move to the middle of nowhere..."

New Yorkers (by way of Maylasia) kill me. Joke's on you, chef! No hard feelings, we hear the chef is a Cavaliers fan (beats being a Knick's fan, am I right?).

Here's to the next 15 years of Pacific East Japanese (and Maylasian) Restaurant.

Long may you wave! 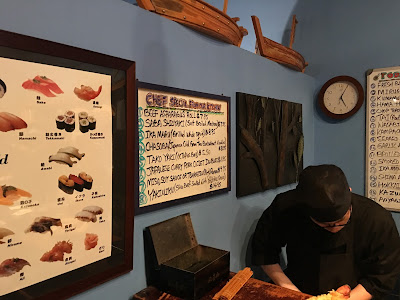