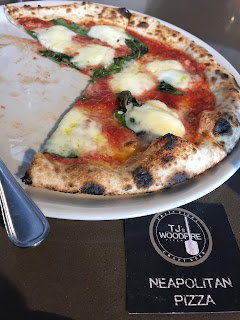 You've no doubt picked up what I'm laying down: we like good pizza. Not bad pizza. Not stunt pizza. Good pizza.

That said, it's hard on my palate living in the pizza desert that is Orange County, California. I've had too much gummy, cardboard pizza in this vast corporate pizza wasteland where branding and franchising mean more than making a good pie. Hell, they've even stolen and franchised a fictional character's idea. Pizza Studio? What does that even mean? It means that corporate pizza is out of being fresh out of pizza ideas.

All of THAT said, the absolute best pizza I have experienced in Orange County, CA is from the good folks at TJ's Woodfire Pizza of San Clemente. Sure, they were named Best Pizza in Orange County, but awards don't make great pies.

What makes great pies? Caring about the food and not about "branding the experience." Importing tomatoes and flour from Italy. Researching and utilizing pizza knowledge instead of just cranking out bottom-line friendly blandness. Insisting that Neapolitan pizzas are eaten on premises and not taken out because the time spent in the carry-out box diminishes the pie (it does). Making a New York pie that would make a New Yorker (or an expat CLE-lander) weep. Have I mentioned that it's good pizza? Hell, it's great pizza.

Add to all of that a wonderful, ever-changing list of beers from microbreweries like Valiant*, Deschutes, Artifex, Lost Winds, and Left Coast among others (because, pizza and beer) (yes, they have wine too). Throw in great, prompt service. Toss in a yummy caesar salad and the best side of meatballs this side of meatballs, and you have "the little food truck that could" that became a great sit-down pizza experience.

If you find yourself in Orange County, CA, as the hordes who land on our beaches yearly do, skip the rest and make TJ's your pizza destination.

* Wow, apparently I had what might be my last glass of Valiant's excellent Alpha Drive Double IPA** last evening. Sorry to read that they're gone. I've been enjoying their beers for a while now, and I've posted about the Alpha Drive previously. It's been a favorite of mine.