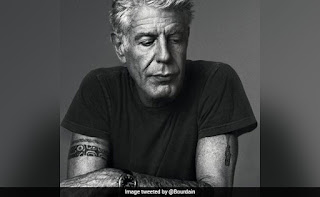 I'd spent the day wading through a state of shock. From time to time I'd checked in on the streams of surprise, sorrow, anger, advice, and disbelief on social. Like many of us, I was looking for some human connection in the void he'd left behind. I'm not one to get personal about celebrity deaths, and there have been so many in the last few years, but this one I'd felt. I'm still feeling it.

Is it because he'd left the things we all want behind? Success. Fame. Friends. Family. Independence. That was some of it, I suppose. Yet, as so many have pointed out, these things do not equal happiness. Still, to his public and those in his circle he'd surely seemed happy. It's often the case when these things occur.

Is it because he was the rare kind of guy who one embraced as a friend; became intimate with through his books, shows, appearances, and social media? I'd certainly felt it, as much as I feel a longing to sit down for one more beer or meal with friends far from me. Not everyone has that impact on so many. He did. He still does.

Yes. It's all of these things, of course. It's also something else. It's something deeper.

All of the repostings of suicide hotline numbers and calls to reach out to those in need help, of course, and they rub a bit of balm on our wounds, but they won't change the fact that people in need can't see past their illness. Like bulimia, anorexia, schizophrenia, or bipolar disorder, the person only sees what the illness wishes. It's how the illness survives. It blinds them. It binds them. It keeps them from help. I'd never understood depression before. I think I know it a little now.

Throughout the years of our long-distance friendship, I'd seen the kinks in the armor. I'd seen the insecurities. I've even noted some of them in this blog, but I'd just noted them as things that made the man who had so much more relatable, more human, not more vulnerable. I'd looked right past the very things that drive a person to take their own life. I'd done nothing to try and save him.

I'd let down a friend.

As I work through my loss and regret, I'll avoid the media ghouls with their gluttony for the morbid details. I don't need anything more than I know. My friend is gone. The only thing left for me, for us, to do is to be aware and hope that we've learned enough to save the next one. We can all do better. We should, for Tony.
Email Post
Labels: anthony bourdain Loss Remorse Sorrow Tragedy